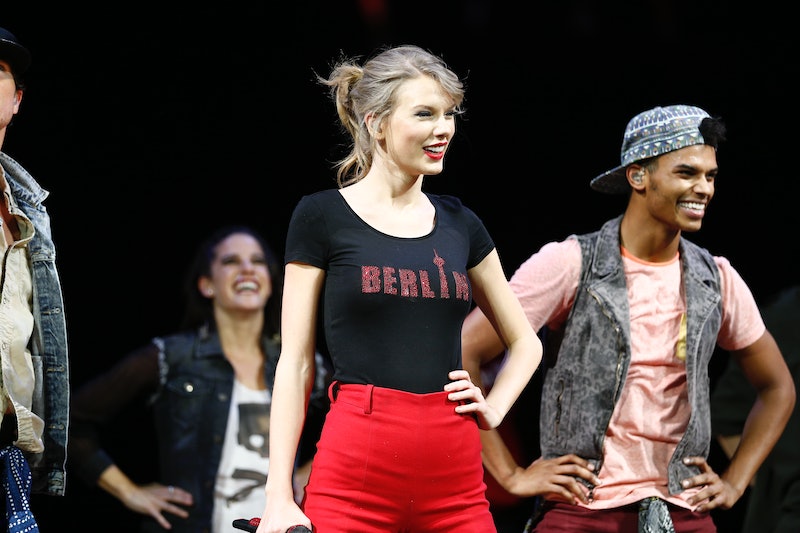 I think we've all pretty much declared Monday, October 27, 2014 as Taylor Swift Day, have we not? At midnight on Monday, Swift released 1989 to iTunes and shook the world with her "Wildest Dreams" (yes, it's already time for puns). However, along with the album also came a booklet that revealed, well, a lot. In the first place, Swift hid secret messages in the booklet that may or may not tell a story about Harry Styles that's both tragic and kind of adorable. In the second place, she wrote an album foreword that was, essentially, the most inspirational letter from a friend we could ever hope to receive. Because we all know Swift is like the best friend we always wanted. She gets us, guys. She totes gets us.

The foreword was a long reflection on the album and on her journey to putting it out to the world, as forewords always are. However, it wasn't just a reflection about her. It was a reflection about all of us. It was a message that all of us needed to hear, a call to arms to take control of our own lives the way Swift feels she has taken control of hers. The whole foreword is worth a read, but here are the best nine quotes to pump you up.

1. All I ever do is learn from my mistakes so I don't make the same ones again. Then I make new ones.

Once again, Swift has written our feelings more eloquently than any of us ever could. Even if we learn from our mistakes, we're just going to make new ones, so we can't beat ourselves up for every failure. We just have to keep learning.

2. I hope you know that who you are is who you choose to be, and that whispers behind your back don't define you.

This was a message that we got from "Shake It Off", but it's nice to see her saying it again, definitively, that we are more than who other people think that we are. I don't know about you, but this definitely inspires me to shake shake shake it off.

3. These songs were once about my life. Now they are about yours.

I found this particularly poignant because, as we all know, Swift is an artist who rips her songs straight from her diary pages. However, in recent months, she has been taking a stand as a feminist to inspire her fans to love themselves and support equality. For her to state that this album's songs are for us, that its messages are for us, feels like another way she is taking a stand.

4. We are never out of the woods, because we are always going to be fighting for something.

The fact that she says "something" here — not specifically love, but that indefinable something — is so poignant because it's true. Life is all about fighting for the things that you want and just because you're in the thick of battle right now doesn't mean you should give up.

Someone get me an applause gif right now. Coming into your own and coming alive are the same thing, or they should be, and once again Swift has said it better than I ever could.

6. I think you have to know who you are and what you want in order to take on New York and its blaring truth.

Speaking as a New Yorker, that is most definitely true, but I also feel that it's true of life in general. To figure out who you are and what you want is one of the hardest things any of us will ever do, but if Swift can do it then so can we.

7. Every day I wake up as someone slightly new. Isn't it wild and intriguing and beautiful to think that every day we are new?

The next time someone tells you that you'll never change, or you doubt that someone you know can ever change, it's always good to keep in mind that we're all someone slightly new every day. It's what we decide to do with that newness that will decide who we are that day.

8. What can be said of all the moments in between our birth and our death? The moments when we are reborn...

I've never thought of life as a series of rebirths before, but once again Swift is giving me something new to digest. Between life and death is a series of moments that transform us and that really is beautiful.

9. You are the only one who gets to decide what you will be remembered for.

Sure, you could argue that this isn't always true. After all, you have no control over what other people will think or say about you. But the point that Swift is making is that it doesn't matter what other people want to think. Your choices are yours, your words are yours, your actions are yours. Everything is subject to misinterpretation, but it won't change the fact that you said or did something. Always make it something you're proud of.

Read the foreword in its entirety below.

These songs were once about my life. Now they are about yours. I was born in Reading, Pennsylvania on December 13, 1989. In the world we live in, much is said about when we are born and when we die. Our birthday is celebrated every year to commemorate the very first instant we came into the world, and a funeral is held to mark the day we leave it. But lately I've been wondering... what can be said of all the moments in between our birth and our death? The moments when we are reborn...

The debate over whether people can change is an interesting one for me to observe because it seems like all I ever do is change. All I ever do is learn from my mistakes so I don't make the same ones again. Then I make new ones. I know people can change because it happens to me little by little every day. Every day I wake up as someone slightly new. Isn't it wild and intriguing and beautiful to think that every day we are new?

For the last few years, I've woken up every day not wanting, but needing to write a new style of music. I needed to change the way I told my stories and the way they sounded. I listened to a lot of music from the decade in which I was born and listened to my intuition that it was a good thing to follow this gut feeling. I was also writing a different storyline than I'd ever told you before.

I wrote about moving to the loudest and brightest city in the world, the city I had always been overwhelmed by... until now. I think you have to know who you are and what you want in order to take on New York and all its blaring truth. I wrote about the thrill I got when I finally learned that love, to some extent, is just a game of cat and mouse. I wrote about looking back on a lost love and understanding that nothing good comes without loss and hardship and constant struggle. There is no "riding off into the sunset," like I used to imagine. We are never out of the woods, because we are always going to be fighting for something.

I wrote about love that comes back to you just when you thought it was lost forever, and how some feelings never go out of style. I wrote about an important lesson I learned recently... that people can say whatever they want about me, but they can't make me lose my mind. I've learned how to shake things off. I've told you my stories for years now. Some have been about coming of age. Some have been about coming undone. This is a story about coming into your own, and as a result... coming alive.

I hope you know that you've given me the courage to change. I hope you know that who you are is who you choose to be, and that whispers behind your back don't define you. You are the only one who gets to decide what you will be remembered for. From the girl who said she would never cut her hair or move to New York or find happiness in a world where she is not in love...