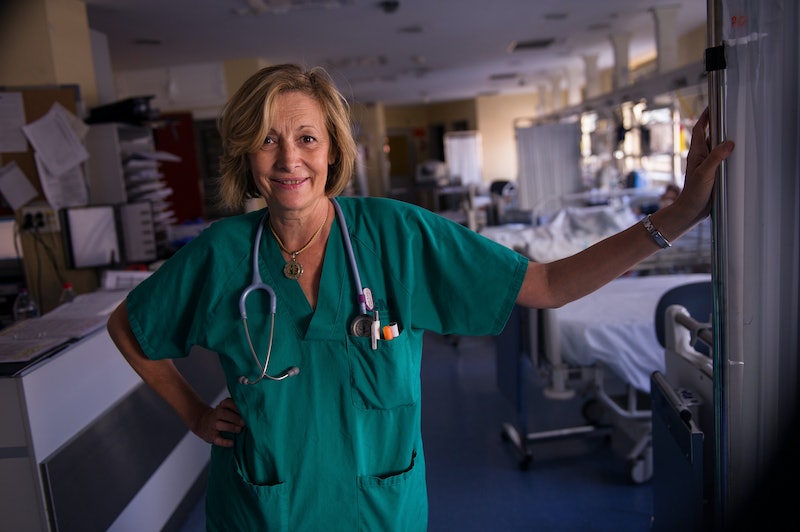 OK, we have some bad gender-gap news.

Though analysts have pointed out that women have bounced back post-recession much quicker than their male counterparts, this doesn't necessarily mean that the gender gap is closing. It does mean that women are getting their jobs back faster, but aren't paid any more when they do so.

Sure, eight in ten medical professionals are women, and the industry has been one of the fastest-growing during the recession's aftershock. But the highest-paid doctors are usually specialists — surgeons, oncologists — and those professionals are usually male. Primary-care physicians and nurses, by contrast, tend to be women — and tend to earn a lot less, which may account for some of the massive discrepancy between male and female pay.

But what of the ever-growing gap in the profession? More women are attending medical school than ever before, with analysts predicting that they'll soon outnumber men. You'd expect the gender gap to, if not close, at least remain stagnant. The study concludes:

And in more less-than-ideal news if you're a woman and want to earn money, Wednesday's Jewish New Year (or Rosh Hashanah) brings in what will likely be another year of Jewish women hitting the glass ceiling.

Though that's not to say that Jewish women aren't climbing the career ladder left, right, and center — there are two in the Supreme Court and two in the Senate, not to mention major players like Sheryl Sandburg — but they too are rarely paid as well as their male counterparts. Even within Jewish organizations, the biggest roles are generally given to men. And of the top highest-paid Jewish professionals in America, absolutely zero are women.

She looks so happy. Shoot, who's going to be the one to tell her that women make up a fraction of research scientists, get less patents, and are only a fifth of science professors?