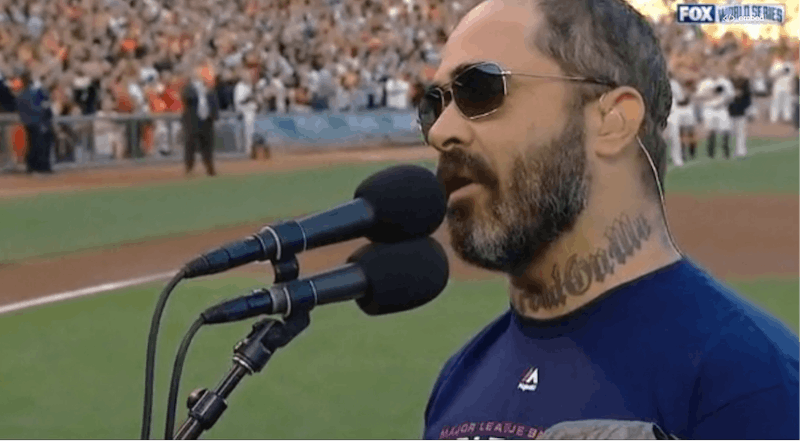 As a person who has been performing the National Anthem at swim meets and baseball games since I was old enough to hold a microphone, listening to Staind's lead singer Aaron Lewis botch the National Anthem at World Series Game 5 is maybe the most cringeworthy thing I have ever subjected my ears to (and I'm guessing it's the same even for people who don't have singing experience.) I mean, on some level I completely understand: Singing the National Anthem is incredibly nerve-wracking, especially when the first two verses have the same melody and include words like "ramparts" and "gallantly" and "hailed," none of which I would actually use in real life outside of my embarrassing historical reenactment gigs. But this is the World freakin' Series, dude. Yes, it's a hard to remember the lyrics, but when you're messing up the words at this level you've got no excuse.

The real snafu begins approximately 20 seconds into the song, when he sings, "What so proudly we hailed, were so gallantly streaming." For those of you who don't know this song by heart (which is totally fine, because odds are you're not getting paid up the wazoo to sing it at a nationally broadcast sporting event), the lyrics are supposed to be, "What so proudly we hailed at the twilight's last gleaming." The lyrics for "gallantly streaming" are meant to come into the next verse, when they're referring to the American flag lasting through a night of battle, which is something I know because I do my damn job unlike some people, Lewis.

There aren't any epic disasters from there, except that the song slows to a crawl so unbearable that it is painful to watch. I have a suspicion that someone was feeding him the lyrics through his earpiece at that point. The other rule I always have for singing the National Anthem at events: Sing it quickly. I mean, not so fast that it sounds terrible, but don't drag it out all dramatically because the truth is, nobody really wants to hear you sing. They're there for the game. So for the love of God, if anybody ever lets this man perform again, please put an oven timer in front of him and perhaps a lyric sheet to spare us all from the awkwardness of those two minutes of their lives everyone who went to the game will never get back.