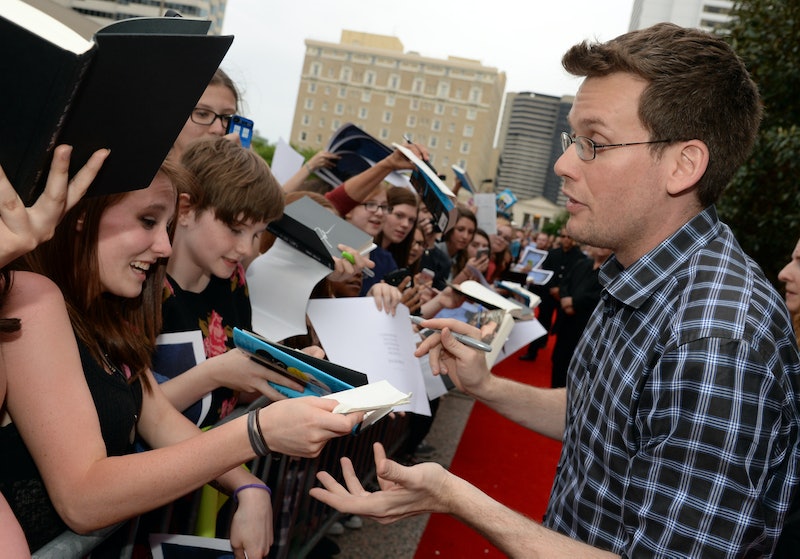 It is a truth universally acknowledged that youth whisperers require the company of other youth whisperers for their very sustenance. Just look at everyone who teen whisperers like Tavi Gevinson or Taylor Swift interact with: Lorde, Lena Dunham, each other. Which is why it only seems destined, in a way, that Taylor Swift and John Green would eventually connect. Who else is working with the romantic notions of teenagers these days quite as industriously as they are?

Swift and Green aren't friends on the record quite yet, but they've already expressed fandom in each other: "I’m in Paper Towns movie meetings all day and they think I’m making notes on the script," Green wrote on his tumblr Monday morning. "But I’m actually listening to 1989." Swift, ever the intrepid tumblrer these days, saw the post and responded with a classic: "My favorite author said WHAT?!?!" (dramatic spacing removed for format). And from here the possibilities are as endless as they want them to be.

Looking at the history of Swift's public friendships, that's a pretty solid foundation: She and Dunham became besties after the Girls creator shot her an admiring DM upon mutual twitter following. Swift's friendship with Emma Stone reportedly started after Stone wrote a letter to the singer-songwriter complimenting her music. So this seems like a good start for... whatever:

And teen whisperers they are: When it comes to contemporary teen romance, Swift and Green are king and queen of the music and young adult lit worlds, respectively. Both are, at least in how they project themselves publicly, people who are very enthusiastic about the work that they get to do, and people who take the responsibility of that work and that influence very seriously. I'm not saying they're going to become friends, or that they're going to work together. I'm just saying that I'd get it if they did. And that it might cause some heart palpitations in the youth population.