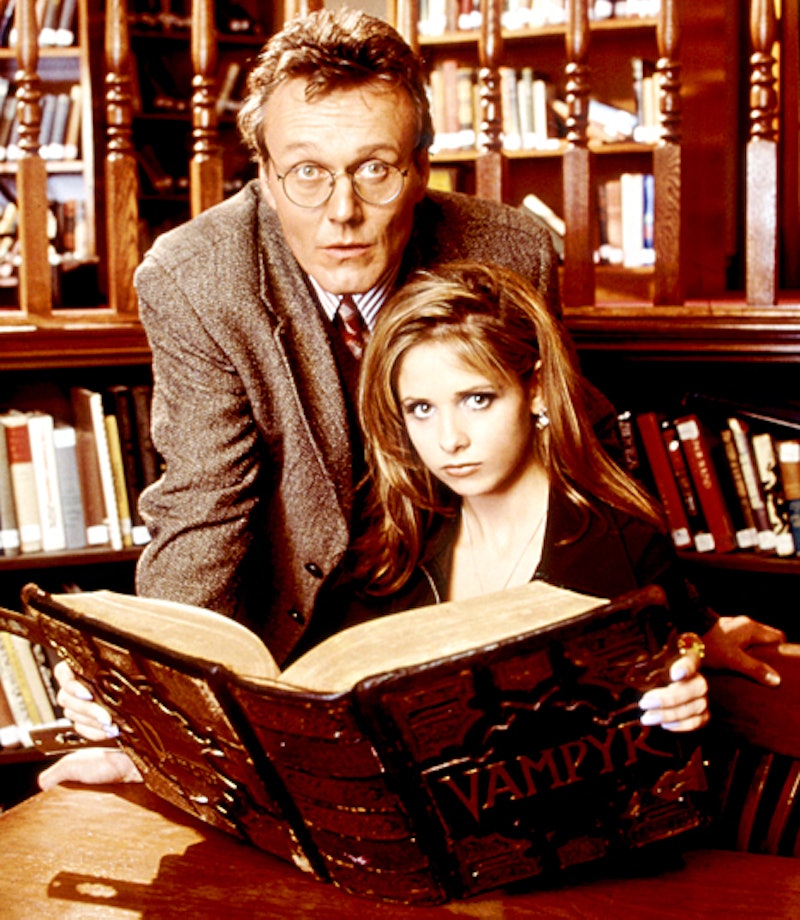 As Halloween swiftly approaches, it's no shock that Pivot has started a Buffy the Vampire Slayer marathon this week. Of course I'm pumped: Buffy has been my all-time favorite show for a decade, and it makes so much sense to tie it up with Halloween. Partially because of the whole vampires, demons and witches thing, but also because of the scariest part of the show: the horrifying realities of growing up.

I mean, you'd think that someone who has the power to slay all the creatures of the night would have her shit together, but as I've said before, everyone has it rough in high school. Besides, the fact that Buffy was a hot mess provided a lot of comfort to me growing up. Sarah Michelle Gellar herself recently stated that she missed playing such a realistic heroine. "The show proved it was OK to have a strong female character, a heroine, on television" she said. "Buffy was a human. As humans, we fight the horrors of our life to get through the day." Seriously, though.

Hilariously (or not), I never learned from Buffy's experiences with the agony of female adolescence, instead choosing to mirror them. Hell, I'm the same age she was when the series started and if you threw in a Gnarl demon here or there, our lives would basically be identical. In any case, here are eight lessons from Buffy I totally should have took to heart.

When You Finally Have Sex with a Guy, He Totally Becomes a Monster

I MEAN, I'd like to think that not everyone's loss of virginity ends up like this. Definitely no one I've been with has killed my teacher after sex, which is a bonus. But I think it's all to familiar for the guy you love to totally pull a 360 after tapping it, and Buffy does not sugarcoat that experience.

Actually Everyone, From Your Best Friend to Your College Roommate, Has Potential to be Evil

To be fair, everyone has potential to be redeemed, too, but this isn't "8 Real-Life Lessons from Buffy That Give You The Warm Fuzzies." Sometimes evil is obvious, like when Buffy's roommate Kathy would blast Cher's "Believe" and borrow sweaters without asking (the worst). Sometimes, however, it's a slowly developing issue, like when meek Willow decided to get all black and veiny after delving into the dark arts for the past few seasons. With that said...

Willow's magic addiction in season six is one of the more heavy-handed metaphors in the series, but it's still a good point. Addiction is what pretty much severed her relationship with Tara and, you know, almost destroyed the world.

Death Does Not Discriminate

Originally the lesson was going to be you can't cheat death, but considering Buffy died twice, I don't think I could justify such a statement. Regardless, killing off characters is kind of Whedon's M.O., and there were more than a few casual losses throughout the series. Most daunting, without a doubt, was when Joyce Summers was offed in season five. I mean, shit, you can fight vampires, but you can't fight an aneurysm.

Eventually You Will Sleep With Someone Who Repulses You

It'll probably be some of the best sex of you've ever had, it'll likely be a whole thing you have to keep from your friends, and it'll definitely happen during the darkest point in your life. As if the few major relationships prior to this weren't traumatizing enough.

In Buffy's case, she saved the world a lot. In my case, sometimes my mom wants to go shopping and I have to be like, "NO, MOM, I'M WRITING THIS POST ON MY LITTLE PONY, OH MY GOD."

No Matter How Powerful You Think You Are, You Can Still End Up Flipping Burgers

So true in this particularly rough economy, but saddest when you have to see the savior of the Earth work shifts at Doublemeat Palace.

This World is Dominated by Patriarchy, and it's Up to Us to Stop It

The entire slayer lineage was constructed when a bunch of old men decided to infuse a girl with the essence of pure demon. That's more than a little bit fucked up. Buffy differs from her predecessors by surrounding herself with friends and sharing the power, acknowledging that everyone has their own strengths (even Xander). Eventually this culminates into the Scoobies casting a spell that gives any girl who has the power inside of her to summon that power and fight. And that's what it's all about. No matter how scary it is to be a girl, to navigate your teens and early twenties, we're all in this together.