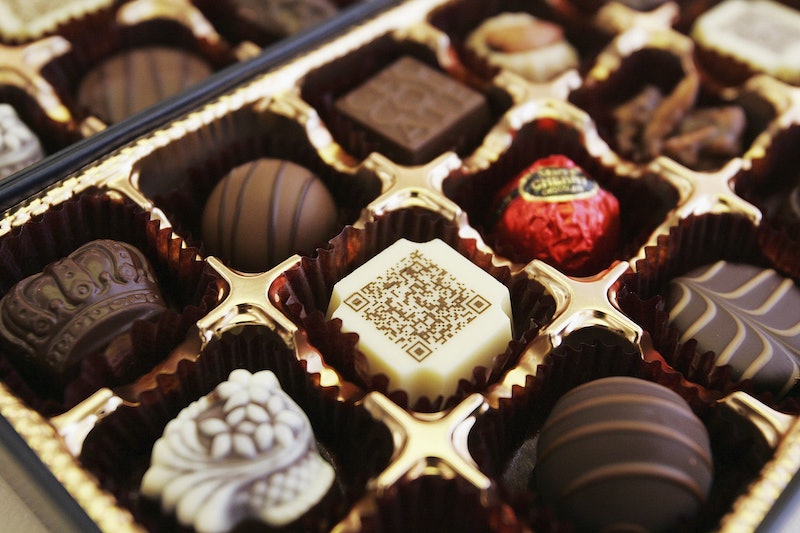 While we may not be able to turn back the hands of time, we can at least try our best to keep the aging process at bay. No, I’m not talking about Botox — I’m talking about chocolate. In the happiest news to ever be released on a Monday, researchers at Columbia University have found that the flavanol in cocoa could possibly reverse normal amounts of memory loss that comes with getting older. (Meaning, there may actually be a way to avoid the non-Gosling aspects of The Notebook.)

Of course, this doesn’t mean you should run out and start consuming Hershey bars at an epic rate, because Hershey bars aren't exactly bursting at the seams with actual cocoa, but it's a nice to know that consuming chocolate that is high in cocoa (read: dark), is, in some ways, really good for us.

Need a few more reasons to eat chocolate? No, you probably don't, but here are seven ways chocolate is good for you anyway.

We already know that eating chocolate when we’re stressed out and or having a bad day feels good on the tongue and in our belly, but a 2009 study found that it can also bring down stress levels.

Over a two-week period, subjects who considered themselves highly-stressed individuals were asked to consume 1.4 ounces of dark chocolate everyday. At the end of the two weeks, not only did the study’s participants feel less stressed, but the results were in their blood and urine, too, where scientists found far lower levels of cortisol and catecholamine, the stress-causing hormones.

IT ACTS AS A NATURAL SUNSCREEN

Chocolate, especially dark chocolate, contains high levels of flavonoids. As a team of German researchers in 2006 found, those flavonoids can help protect the skin from getting red and burning too quickly when exposed to UV light. That means eating chocolate just might aid in the fight against skin cancer.

This isn't to suggest that you should skip the sunblock at the beach just because you opted for chocolate for breakfast. But it is something that you can add to your skincare arsenal.

IT CAN HELP DIARRHEA

Since the 16th century, both South America and Europe have relied on dark chocolate to stop diarrhea. The flavonoids found in cocoa create a binding effect that can keep your body from secreting any excessive fluid, which of course is what’s going on with you when you have an attack of diarrhea.

However, this trick only works with dark chocolate, as the lactose intolerant people of the world can attest.

IT CAN MAKE YOU SMARTER

There’s just something about chocolate that makes everyone feel good. Not only does it make our mouth happy, but the combo of antioxidants and caffeine sort of tickles the brain and stimulates its pleasure centers. Because chocolate boosts blood flow, it can lead being more sharp and aware.

IT CAN CURE CHRONIC COUGHING

Whether it be from a cold or a regular old cough you just can't shake, a 2012 study of 300 coughing patients showed that the theobromine found in cocoa can offer cough relief.

Researchers found that eating a small bar of unsweetened dark chocolate every day can actually block sensory nerves and put chronic coughing to bed. It was also found that although codeine is the typical drug prescribed to help this particular ailment, theobromine is even better and, obviously, tastier. Chocolate cough syrup, anyone?

IT CAN MAKE FOR HAPPIER BABIES

A study from the University of Helsinki, Finland found that women who consume chocolate during their pregnancy have happier babies AND a 40 percent lower risk of developing preeclampsia, a high blood pressure condition.

And if you're concerned about the caffeine in chocolate, don't be. A pregnant woman can have up to 200mg of caffeine a day, which is about one cup of coffee. A half a dark chocolate bar (1.5 ounces), on the other hand, has roughly 26 and 34 milligrams of caffeine, depending on the percentage of cocoa it has. That's basically almost six full bars of dark chocolate a day, if we go by 34 milligrams.

IT'S GOOD FOR YOUR HEART

If you have a bad heart, putting something like chocolate in your body doesn't immediately seem like a good idea. However, dark chocolate actually does wonders for the heart, by preventing white blood cells from sticking to the walls of your arteries, which keeps them nice and flexible. (Stiff arteries, where the blood can't pump properly, can lead to high blood pressure and heart disease.)

Now if only chocolate could make the rest of your body flexible.