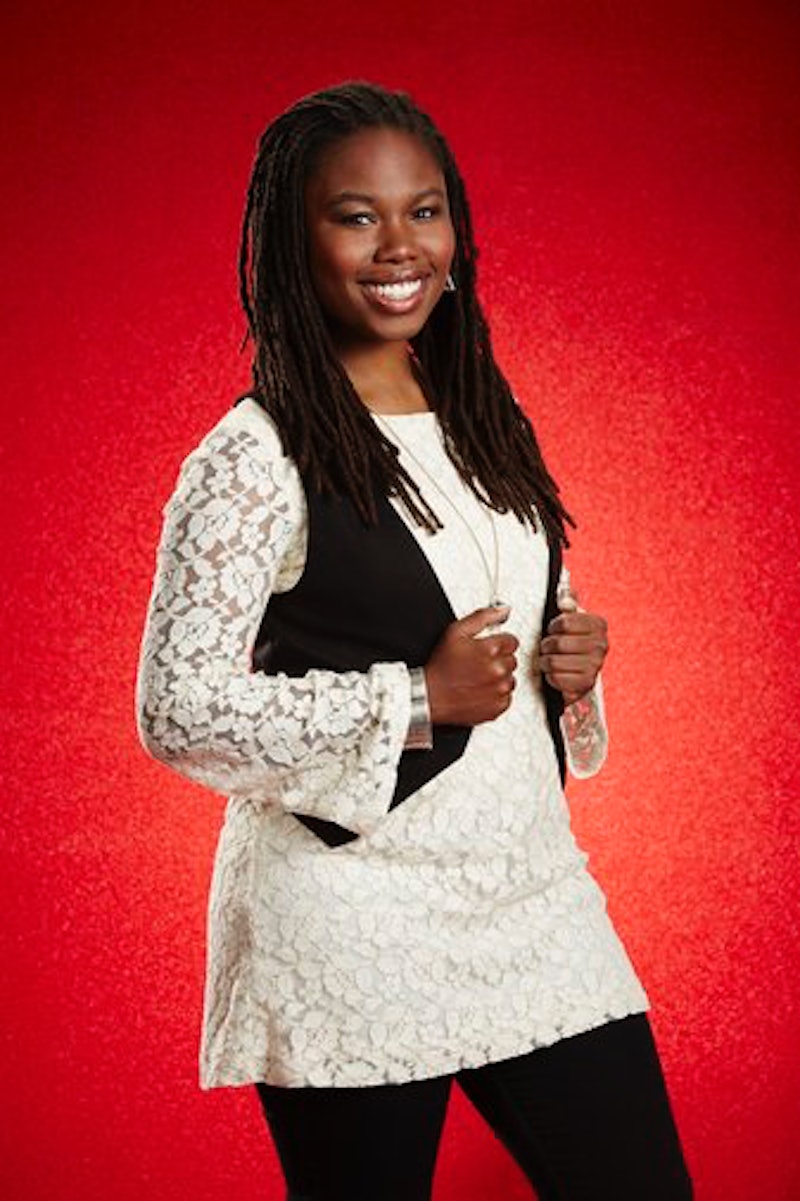 Though the coaches didn't turn for her when she auditioned in Season 3, Kingston, Jamaica native Anita Antoinette returned to The Voice hoping to shock the coaches the second time around. Anita is one of those rare artists who embraced the advice the coaches give her; she was encouraged to come back rather than give up. When you have a dream you have to go for it, and Anita’s determination got her not only a four-chair turn, but a standing ovation from all four judges as well, in Season 7.

Anita will leave her Reggae roots briefly when she sings this summer’s biggest hit “Rude” by Magic during the knockout round — another impeccable song choice, I might add. She’ll be up against Craig Boyd, who may very well get stolen, but Team Gwen is in no shape to give this girl away. We didn’t get to see her battle round, but Anita will surpass the knockouts not only because she’s got the talent, but also because she shares unique qualities with three accomplished past contestants. Each of these advantages was crucial to the individual success stories of Season 6 runner-up Jake Worthington, Season 5 runner-up Jacquie Lee and Season 5 winner Tessanne Chin, so having all three makes Anita a threat to the Season 7 competition.

Jake Worthington was another one of those rarities that didn’t get one chair to turn during Season 5, but took the coaches’ advice to heart and got three chairs to turn on his second go around. Jake managed to go from no chair turns, to runner-up for the title last season and was an immediate crowd favorite once he reached the live shows. If Anita’s Reggae-esque rendition of “Rude” advances her into lives, whether it’s with Gwen or not, America is bound to love her. Like Jake, she’s got the comeback story on her side, as well as the voice and the cute-factor to keep her in the game.

Jacquie Lee went with Christina Aguilera during her season because she felt a genuine connection to her as an artist and style icon. Christina treated Jacquie like a little sister throughout the competition and undoubtedly keeps in touch with her now. Kingston also happens to be the name of Gwen Stefani’s 8-year-old son, named of course after the Jamaican capital. Anita admittedly entered the blinds intending on choosing Adam as her coach, but in the moment she felt that same connection to Gwen that Jacquie felt with Christina. Gwen will get Anita to where she wants to be because she has a similar musical influence, an understanding of making music that touches people and the ability to blend styles. Gwen is too committed to Anita’s artistry to let her go so soon.

Tessanne got the crowd going every time she expressed her Jamaican roots in a performance because it was compelling and powerful. Anita has a similar way of performing that is enchanting to watch and that’s a quality that will get her a lot of votes. She is the kind of artist who will get millions of “Voice Save” votes on Twitter in the event that she is in the bottom three because people will be addicted to her sound. It’s unique and intriguing and exactly what the industry needs right now.

More like this
Every Celebrity From 'The Masked Singer' Season 8 Revealed Or Rumored So Far
By Gretchen Smail
Jason Derulo Is Launching A New Singing Show In The UK
By Maxine Harrison
18 Years After 'American' Idol, Jennifer Hudson & Simon Cowell Reunited On Her Talk Show
By Radhika Menon
Here's The Full List Of Zach's Confirmed & Potential 'Bachelor' Contestants
By Kadin Burnett and Grace Wehniainen
Get Even More From Bustle — Sign Up For The Newsletter