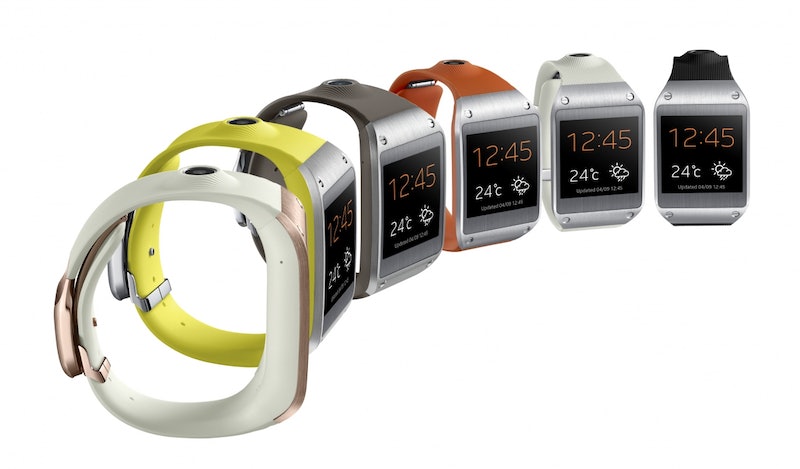 What's the time? Time for you to get a smartwatch!

OK, sorry. We had to. But, seriously, Samsung is calling it: the smartwatch is now a thing.

On Wednesday afternoon, the South Korean company unveiled the Galaxy Gear, which has built-in integration with the company's line of Galaxy smartphones. The Gear is a shiny new successor to their clunky and unpopular first attempts at "smartwatches" back in 1999 and 2000, which didn't quite take off as hoped. Probably because they looked like this.

Fortunately, a lot of things have changed since the millennium struck, most notably Justin Timberlake's hair. Samsung did some thinking, and now we have this.

Well, we wouldn't wear it next to our actual watch either... but maybe that's because less and less of us are wearing actual watches these days. Today, most Americans own smartphones, and we use them for everything: to tell the time, to catch up with our friends, to set our alarms, to check the weather. So last year, rival giant Sony put two and two together and decided to blend the ease of a watch with the functionality of a smartphone.

Unfortunately, their first attempt really, really sucked. From a review by Gizmodo entitled "Maybe The Worst Thing Sony Has Ever Made:"

No one should own this, no matter their lifestyle preferences or moral views. I promise you—you won't like it. The Sony SmartWatch is pathetic, frustrating, and empty. There's no way to justify spending $150 on this—this ripoff of a thing. It's easily gulped down at first under the guise of luxe gadgetry, but spending any more than a few minutes swiping with despair reveals just how much of a bad practical joke this thing is.

Sony backed off with its tail between its legs... but re-emerged the following year with a newer, better version. Unfortunately, some big-deal Kickstarter projects — MetaWatch, Pebble — had already outdone them with their own cheaper, custom-made smartwatches. Regardless, the big guys sat up and took notice of the trend, and rumors began to swirl that Apple, Google, and Samsung were getting in on this whole "smartwatch" thing.

As we've mentioned before, September is going to be a huge month for techies. We've already seen Microsoft buy Nokia, and are waiting for Verizon to merge with Brit telecom giant Vodafone. We're on the edge of our seats about the two new iPhones, not to mention the Berlin's annual IFA conference, during which new products are typically launched. And we know that at least Samsung and Sony are getting in on the smartwatch game, with Apple and Google rumored to follow shortly.

So now that Samsung has officially kicked things off, what is their offering actually like? "Samsung is pushing the innovation envelope," said one industry analyst, very enthusiastically. "This smart watch will be as popular and successful as their smart phone and tablet. And it will all work together."

Emphasis on "smartphone and tablet" — which is where the success of the watch will largely come from. Everyone already gets their e-mail, texts, calls, Facebook messages, Tweets, and everything else under the sun on their smartphone — but now you could check your notifications on your wrist, which is the main appeal of these new gadgets. Said one Samsung director: "Get the news you've been waiting for, faster." (The subtle rudeness possibilities are endless!)

The new phone includes a high-resolution camera and a tiny microphone, and the band comes in a whole bunch of colors — "Jet Black," "Wild Orange," "Oatmeal Beige," just to mention a few. It'll start at $299 — significantly higher than Sony's last offering — and will be available next month. Oatmeal Beige...hot.

There are whispers that the iWatch, which Apple appears to have put one of their top execs in charge of, will have a curved glass screen. It will, of course, tie in with iOS, and Google's watch will do the same for Android. Next up: glasses that let you take photos, read the news, and get directions, so you never actually have to do anything... Oh, hang on.