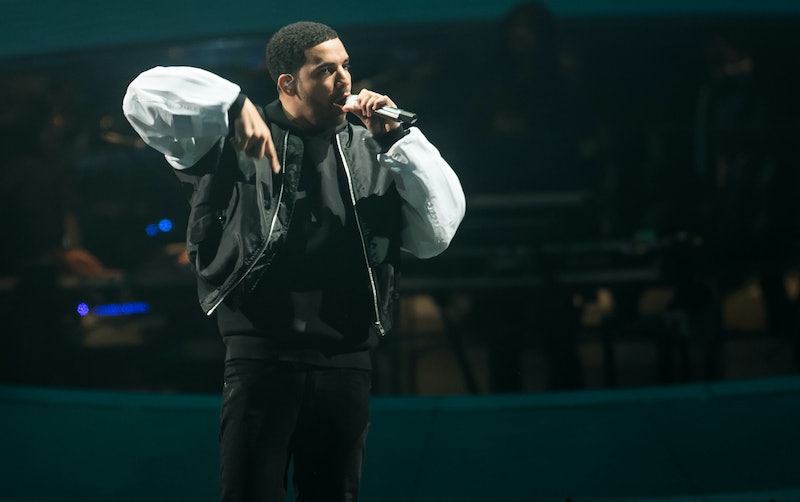 Every time I neglect checking Twitter over the weekend, I miss what could be seminal moments in my life. It happened last December, when Beyonce broke the internet when she stealth bombed with BEYONCE, and it happened this weekend when Drake released three new tracks out of nowhere into the blessed World Wide Web. Drizzy hasn't released an album since Nothing Was the Same in September of last year, and though that's not the far distant past, it certainly feels like it. Drake dropped three new tracks: "6 God," "How Bout Now," and "Heat of the Moment." They follow up the recently released "0 to 100," and it feels like Drake is no longer tender (probably he is at heart) — he's mad. The new songs take a departure from the tone of Nothing Was the Same that's earned Drake a reputation for softness.

To be fair, I love Drake. I respect the fact that I do not understand the complexities of the hip hop industry, and so the criticisms of his vulnerable, sad boy style might be valid. And though he purports a don't-give-an-eff attitude on his new tracks, it seems like Drake finally popped off after all the hate. Gone are the musings of the melancholy Nothing Was the Same, whose introspective Drake portrait cover art launched a million memes, including a somber weather app.

When discussing Drake's new tracks, a friend put it best. I asked her, "Do you like Drake?" To which she replied: "Yeah, but only his new stuff because he's yelling and he's mad." Some of his hardest lyrics all but squash those softness suspicions. On "How Bout Now," he gets straight up pissed about loyalty: "Always felt like my vision been bigger than the bigger picture/ Crazy how you gotta wait until it's dark out to see who really with you."

He's mad, but he's still a poet, in my humble opinion. He's also apparently become cynical about love: "Ya, you ain't really fuck with me way back then girl, how bout now?/ Cause I'm up right now and you suck right now." Never did I think I'd see the day when Drake told a girl she sucked.

"6 God," as the title suggests, is a flaunt out and out. "I'll admit it, I'll admit it/ You haven't been a man for like a minute/ I told you that I'm in it for the long haul/ You can really get the business." It's a boasty track about all of Drake's stuff, which includes Bentleys, obviously. Bonus: this is the song that birthed Drake's emoji tattoo.

"Heat of the Moment" is the most typically existential Drake of yore; he's worried, but still mad: "Then ask myself/ Who am I gonna be when it's all over? When it's all over?/ I don't wanna think about that right now." Yeah, not thinking about it is my game, too. I don't know if Drake is intentionally trying to prove that he's not soft, but I do know that these tracks are amazing.

Now when will Views From the 6 drop!?