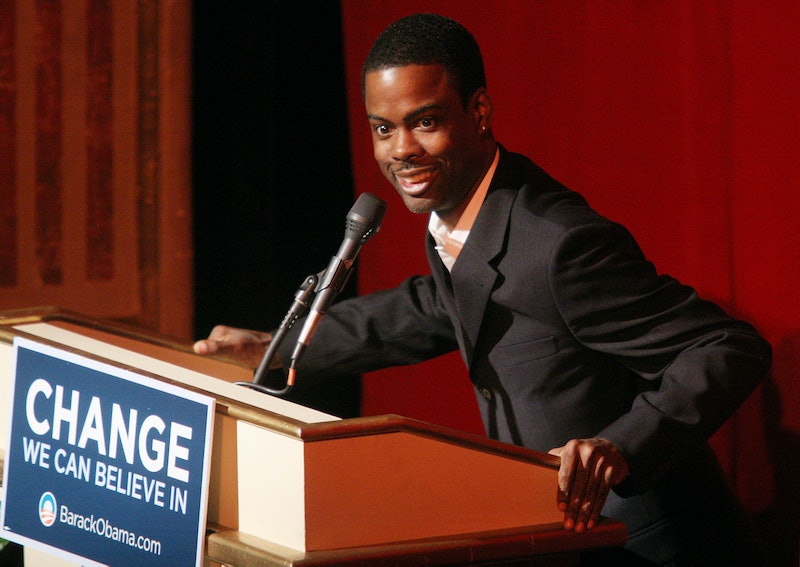 In more pre-pre-premature Oscars news: apparently Chris Rock was never asked to host the 2015 Oscars ceremony; it was just pure rumor. In an interview with The Wrap, the comedian said that he wasn't in the running at all for consideration for the host gig, which ultimately (and fortunately) went to Neil Patrick Harris, a choice that Rock supports. Rock said: "I didn't get an offerI mean, it's Neil Patrick Harris. It's like, who would pick me before Neil Patrick Harris? He's an amazing host."

Amazing the former Hedwig and the Angry Inch certainly is, but that doesn't help me from being a bit bummed that Rock wasn't even considered. It would have been a point in the Academy's corner to ask him to host again (Rock previously hosted the 2005 Academy Awards), but no dice. Happy as I am that they also apparently asked Julia Louis-Dreyfus and asked Ellen again after her bang-up performance at this year's ceremony, there's that tug that goes, "Well, Rock was the LAST non-white host, ten years ago." For the most part, I've resigned myself to the fact that the Academy is stuck in their old ways, but I shouldn't be.

Rock was a great host in 2005, but it seems like his opening monologue might have been a little TOO contro for the Academy to ask him back. He didn't shy away from race-related humor, which is one of the reasons he was such a singular host. I mean, the Academy knew what they were signing up for, but maybe they didn't like being the butt of the joke. "We have four black nominees this year," Rock said. "It's kind of like the Def Oscar Jam." Also: "At least they make movies for white people to enjoy, with real names. Black movies have titles like Barbershop. That's not a name, that's a location!"

Maybe TOO true? It's hard to say; it's not like the Academy Awards is inconspicously undiverse. It's pretty univerally accepted. And subsequent hosts after Rock beefed it way harder than his underrated performace—lest we forget the James Franco Anne Hathaway travesty, or Seth McFarlane (his hosting, and just him in general). Rock was genuinely funny and colloquial, and though I'm sure that Neil Patrick Harris will dazzle and awe as per usual when he's on a stage, I wish that Rock had at least been considered. You can relive his 2005 monologue, at least: