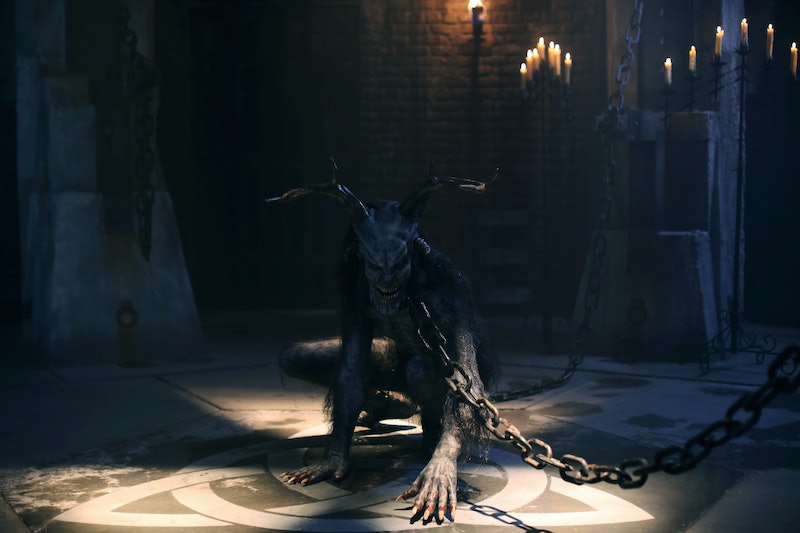 If the duties of being witness and seeing death and destruction all around weren't enough, Sleepy Hollow's Abbie Mills also had a blast from the past who turned out to be a real monster of a reunion on Monday night's episode "And The Abyss Gazes Back." And yes, pun is intended. As all Sleepy Hollow fans know, Abbie became the kick-ass woman she is today by the mentorship and fatherly advice of the former Sheriff August Corbin. But in "And The Abyss Gazes Back" we were introduced to Corbin's son Joe whom Abbie used to babysit but their relationship has definitely soured since he was nine-years-old and she was still at threat of spending her years in juvenile hall. But reconciliation between the one-upon-a-time friends takes a supernatural turn, as things always do on Sleepy Hollow.

When Abbie first sees Joe again, it's at a bar while she and Ichabod are enjoying a cold one when they spot a fight happening at the other side of the room. One of the rowdy men is Joe and instead of addressing Abbie in a familial or even friendly way, Joe refers to her coldly as Lieutenant Mills. Abby soon finds out that little Joey blames Abbie for the death of his father and when Joe finds himself the survivor of a suspicious attack which leads to the death and gutting out of his friends, he refuses Abbie's help because of his grudge against her.

Apparently August Corbin spent more time mentoring Abbie than focusing on his own flesh and blood, apparently Joe once waited five hours to have a fishing trip with his dad who was off teaching Abbie how to shoot. That was also the night that Joe decided to enlist in the military. Abbie tries to reason with Joe that while August might have spent a lot of time taking Abbie under his wing, he "just had a big heart and couldn't stop helping people." But in the end, he always loved and supported Joe. "You were his world," Abbie says to Joe.

This reconciliation thankfully helps Joe as the gang (who needs a team nickname I think, for now maybe I'll call them Team Stop The Apocalypse) comes to realize that Joe is the cause for the brutal murder of his friends. Henry Parrish, aka Ichabod's son and the Horseman of War, turned Joe into a Wendigo for his own personal plan to bring Hell on Earth. And yes, you have heard of the Wendigo from both Supernatural and Teen Wolf .

In the end, Abbie and Team Stop The Apocalypse find a way to cure Joe of his Wendigo curse despite everyone except Abbie believing the worst had happened and that Joe would not come out of this curse alive. The episode ends with Joe asking Abbie for her help to continue his dad's quest to help people, he asks for a letter of recommendation from the elder Mills sister so he can try and get acceptance into Quantico, the exact path Abbie was planning to take before she learned of her role as a Witness. Will we ever see Joe again? If his journey to become the man his dad always believed him to be continues, it might be nice to have a Corbin back on Team Stop The Apocalypse. Seeing Abbie and Joe worked together to save the world would have made August so proud.