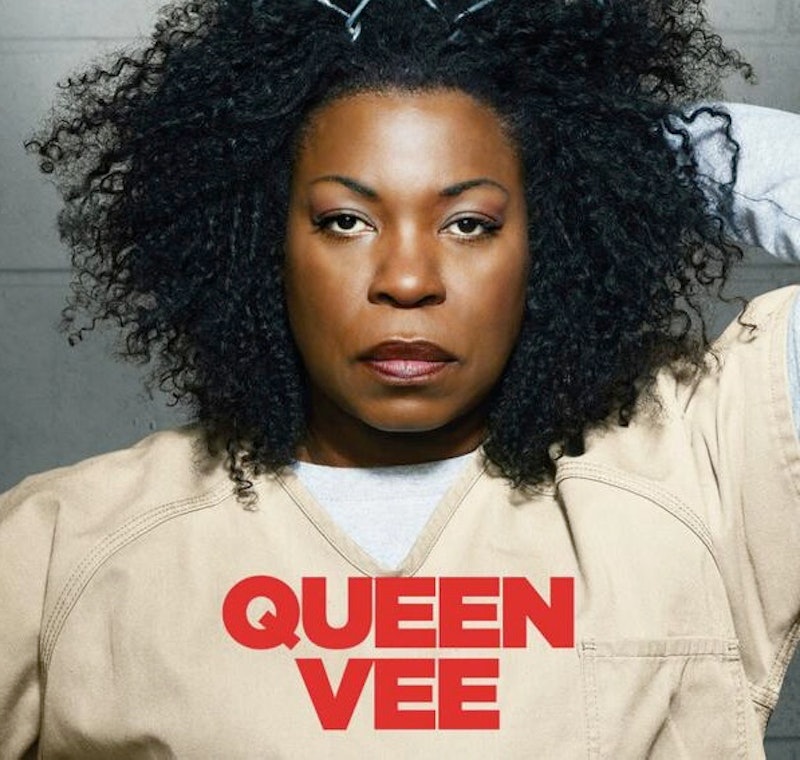 Litchfield is in serious trouble. Admittedly, Orange Is the New Black makes it a point to ensure that Litchfield is in trouble every single season. I mean, for a show taking place in such a confined location, they sure have to deal with a lot of terrible things in there. But Season 2 was dominated by the manipulations of a character known only as Vee, who was in the institution years ago and was a shadowy figure in the past of both Taystee and Red. Not only did she take over the prison, she also staged and almost successful escape attempt when things stopped going her way. Then she got hit by a car and we thought that was that. Sorry, but Vee is returning for OITNB season 3, so everyone is really in trouble now.

We all assumed that Vee was dead considering the close-up shot of her unmoving body after she was mowed down. However, we should have known better from horror movies. No matter how dead you think the villain is, they always come back. There's a good chance that Yvonne Parker, who plays Vee, is only on set to film some flashback scenes, but what if that's not all? What if Season 3 opens with shots of Vee fighting for her life at the hospital after her body is found and then being shoved right back into Litchfield to cause trouble again. WHAT IF?

If Vee does return, then nearly every single person in Litchfield is in her bad book.s Sure, she achieved most of her power through manipulation and pretending to be nice to gain followers who would do anything for her, but she also more than proved that she's willing to shank someone when the chips are down. Vee might not want to get her hands dirty, but those hands are redder than anyone else's. Who cares about a little murder? She's already in prison. It's like having a heart attack inside a hospital. You're kind of in the perfect place for it, you know?

One thing is for sure. If Vee really is back outside of a flashback, then pretty much no one is safe. If there's one thing that she's proven, it's that she's really, really good at surviving. At the end of the world, the only survivors will be cockroaches, Twinkies, and Vee — and, as Zombieland taught us, even the Twinkies are suspect in that Apocalyptic scenario.