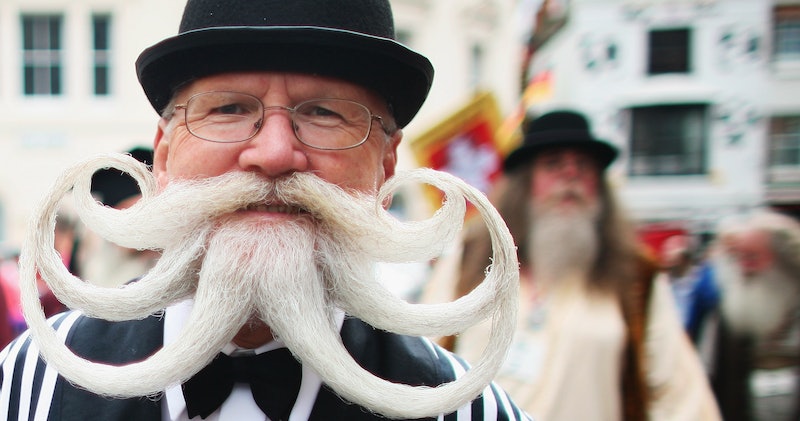 The end of October is rapidly approaching — and you know what that means, right? For once, I’m not talking about Halloween; I’m talking about November — or more specifically, the men's health fundraising campaign, Movember. I’ve found something to help you prepare for the onslaught of mustaches you’re about to encounter, though: An infographic that tells you just about everything you could possibly want to know about Movember. Scattered throughout, you’ll also see some ‘stache inspiration, because hey. Everyone’s got to start somewhere, right?

But first, a little history lesson. In 2003, friends Travis Garone and Luke Slattery found themselves discussing the mighty mustache over a beer at a pub in Melbourne, Australia: Where had it gone? Why weren’t they as popular anymore? Although it initially began as a joke, they eventually decided that not only could they attempt to bring the mustache back, but moreover, to do it for a good cause. One of their friends’ mother was fundraising for breast cancer at the time, so Garone and Slattery opted to gear their newly-christened Movember efforts towards raising funds and awareness for men’s health issues like prostate cancer. The first year, they had 30 participants. Ten years later, there have been a total of 4,027,688 participants.

Interestingly, there’s also a second, slightly earlier origin story: According to a news report aired on November 30, 1999, another group of friends in Adelaide, Australia developed the same idea; instead of being about men’s health, however, it was an effort to raise funds for the RSPCA. Both uses of the term “Movember” seem to have been developed independently of each other, although these days, the one that pertains to men’s health has largely prevailed. It’s sort of the dude answer to October’s designation of Breast Cancer Awareness Month.

These days, Movember’s headquarters are located in Los Angeles; the movement has raised $559,000,000 and funded 770 men’s health projects so far. You can participate alone or as part of a team — and you don’t even have to grow a ‘stache to raise funds for the campaign. You can participate in athletic events, throw parties, and even pop on down to Movember HQ for a haircut or a shave.

Check out the infographic below for more facts of both the fun and informative variety. Get mo-ving!