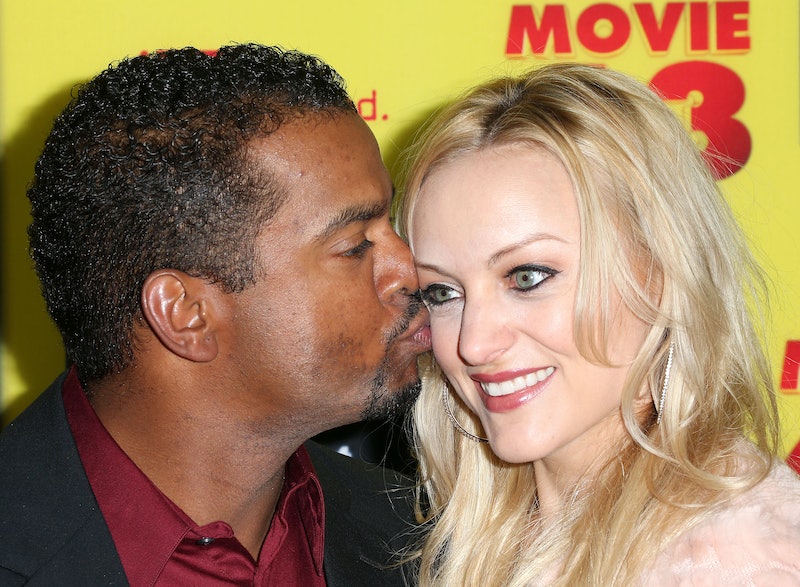 Finally, Carlton Banks is the center of attention. The beloved Alfonso Ribeiro, most famous for his days playing Will Smith's cousin Carlton on Fresh Prince of Bel-Air, has charmed America again with his amazing performances on this season of Dancing with the Stars. And on Monday night's show, he surprised everyone in a different way. Alfonso Ribeiro announced that he is expecting his second child with wife Angela Unkrich. Ribeiro was ecstatic when he shared the news, saying, "My son, it's his first birthday today, so I'm so happy that he's here with me. And as a wonderful present, my wife and I decided to get him a little brother or sister. We're having a baby! I wanted to announce it here on the show because I just wanted to say thank you to all the fans and say I love my wife." Aaaaawwww! How precious! So this begs the question, who is the lucky lady that is married to this sweetheart of a man? Who is Angela Unkrich?

We need to know more about the woman who has stolen Alfonso Ribeiro's heart and has made him this happy. I did some investigating (OK, some social media creeping), and here's what I found out about Angela Ukrich.

Unkrich is from Swedesburg, Iowa and attended Northwestern University. She has two brothers, Tyson and Brendon, and she has found success as a professional writer.

Her Romance with Ribeiro

Unkrich started dating the Fresh Prince alum in 2011. The couple announced their engagement in July 2012 ,and got married on Oct. 13, 2012 in Burbank, Calif. Will Smith, N'SYNC's Joey Fatone, and baseball star David Justice were all in the wedding.

The writer has been the ultimate supporter of her husband and his partner Whitney Carson on Dancing with the Stars. She attends his performances and rehearsals, and has expressed her adoration via social media.

Her Devotion as a Mom & Step Mom

Unkrich is a very enthusiastic mom to her one-year-old son Alfonso Lincoln Ribeiro and has been giving glimpses of him growing up via social media with pictures of all his activities and photos marking each month of his life so far. Unkrich also has a nice relationship with Ribeiro's daughter, Siena, from his previous marriage to actress Robin Stapler.

Her Friendship with the Fresh Prince Cast

She has befriended some of Ribeiro's Fresh Prince costars. Above, you can see Hilary (Karyn Parsons) and Ashley (Tatyana Ali) met her baby!

In her Twitter bio, Unkrich describes herself as, "Wife, Mother, Daughter, Sister, Friend, Northwestern Grad, Iowa Farm Girl, Former Springboard Diver & Gymnast, Travel Lover, Cubs Fan, & Golf Enthusiast." Sounds like a well-rounded woman. And there is plenty of photographic evidence to verify her skills. Bet she can dance too!