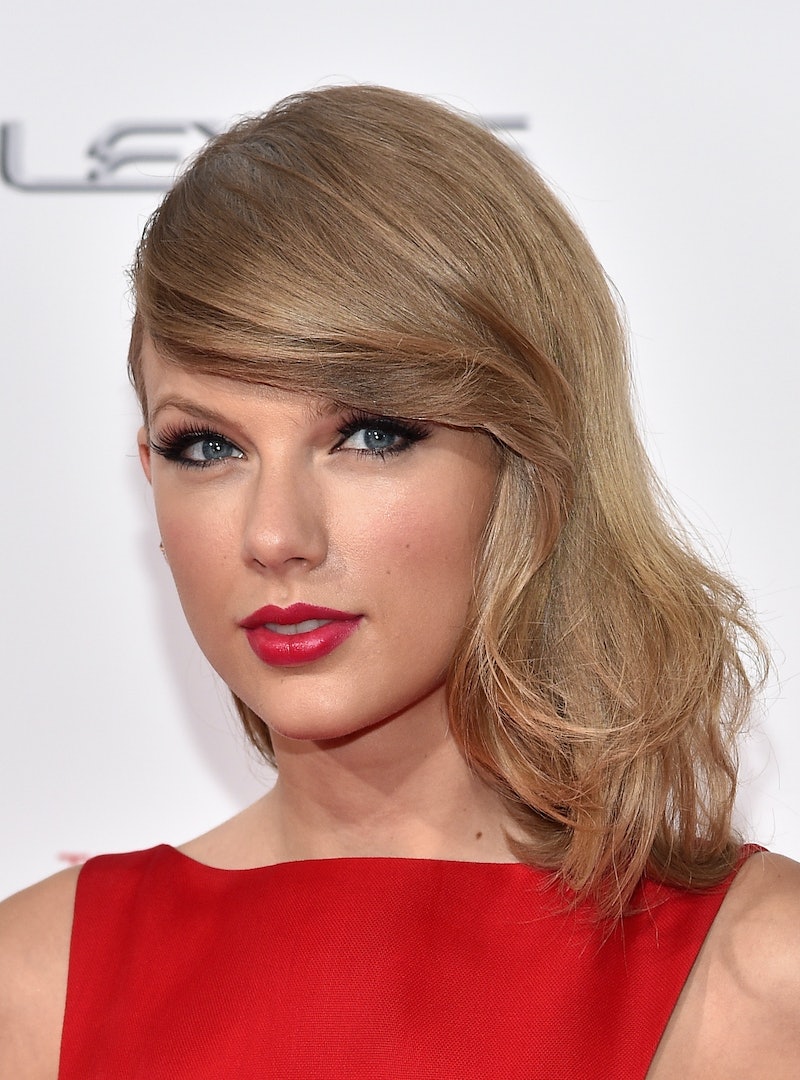 "Taylor Swift just gets me," is something I've told anyone who will listen over the past two days. It's no secret that Swift's new album 1989 is her best yet and on Tuesday, the singer announced that "Blank Space" is 1989 's second single. Which is great news and further proof that T Swift and I are connected on an extremely high level, considering "Blank Space" is the best song on 1989 and my personal favorite. (Seriously, if you hear someone muttering, "Darling, I'm a nightmare dressed like a daydream" under their breath as they walk by, it's probably me.) But aside from being perfect, there's something interesting going on in this song — "Blank Space" paints Swift as an off-her-rocker date/girlfriend. Which totally can't be the case, right?

I mean, this is the same T Swift that hangs out with her cats, bakes cookies, is obsessed with Tumblr, and clearly binge-watches TV during her days off (her cats are named Olivia Benson and Meredith Grey — don't try to tell me she hasn't seen an SVU marathon). That doesn't necessarily translate to a kind-of predatory, emotionally unstable woman that's constantly waiting for the other shoe to drop and believes that men only like love when it hurts. Right?

Thus, I feel the need to explain what my dear imaginary BFF really means when she sings about her exes calling her "insane."

"You look like my next mistake/ Love’s a game, want to play?"

Explanation: This is Swift in the dairy section of her local Gristedes. It's too soon for holiday-flavored non-dairy creamer, but she can't help it. She's so in love and she can't stop.

Explanation: Swift's a great baker, but is she a chef? She's definitely singing about the possibility of accidentally burning her new NYC apartment down by getting too excited with these housewarming gifts.

Explanation: What Swift's actually talking about here is not romance spiked with pain, but a friend or potential date's first time at SoulCycle. She lives in NYC now, she's going to start hitting that place up on the regular any day now.

Explanation: What exactly does "insane" mean? Because my boyfriend calls me "insane" all of the time because I love our cats so much (yes, I have two — Taylor and I are soul sisters). It's no secret that Swift loves her cats more than anything and for non-cat ladies, that might be construed as "insane."

"It’ll leave you breathless/ Or with a nasty scar"

Explanation: Not about love, just the high stakes of throwing caution to the wind and actually going down a Slip'n'Slide. Swift's such an old soul, daredevil decisions like this are difficult for her to make.

"Find out what you want/ Be that girl for a month"

Explanation: Obviously this is about Swift joining Tumblr, realizing that someone wanted her to be this "Becky" person, and joining in on the joke for long enough to have a t-shirt made. But at the one-month point, she's going back to being regular, old T Swift. So don't get any ideas.

"Wait the worst is yet to come, oh no/ Screaming, crying, perfect storm/ I can make all the tables turn"

Explanation: Swift's not talking about herself here, she's talking about you when she unexpectedly whoops your ass at pool. Oh how the tables turn when she hits that impossible trick shot.

"Rose gardens filled with thorns/ Keep you second guessing like/ 'Oh my God, who is she?'"

Explanation: The Internet is a strange place — it's so wonderful, until people actually start thinking you're "Becky" IRL.

"I get drunk on jealousy"

Explanation: We're just hearing this all wrong — Swift's actually singing, "I get drunk on whi-is-key," about that one time she day-drank and cooked with Ina Garten.

Explanation: No, she's not your nightmare. This is just one of those "I can't even"-like exaggerations. Swift's really just (unnecessarily) apologizing for how she looks when she wakes up in the morning (possibly after a day of drinking with Ina) because she usually looks so perfect.