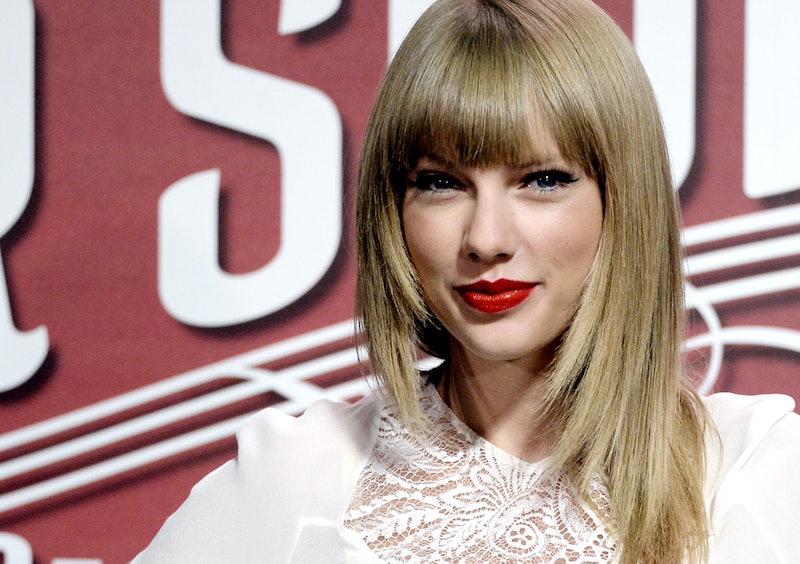 I'm just gonna shake, shake, shake, shake, shake — until I can figure how to deal with all of the feelings I'm feeling about Taylor Swift's 1989. I'll admit it, I was entirely overwhelmed by Swift's latest release because, I mean, it's all just that good. Even though T. Swift released the 1989 track-list last week and I had ample time to prepare, how could I possibly not skip through to "Bad Blood" to check for Katy Perry-targeted shade? (I didn't do this, but I wanted to.) And, I mean, of course I couldn't skip over Swift's previously released songs. (Any excuse to pretend I dated Harry Styles while listening to "Out Of The Woods" is a good one.) So, the struggle was incredibly real when Taylor Swift released 1989 on Oct. 27.

Luckily for you, I suffered through all of the pain and agony of listening through the entire CD before skipping around to my favorite songs so you don't have to. Now, every damn song on this album is incredible and I can guarantee that you'll be bumping 1989 nonstop for the next few months. But, I'll tell you right now that some of these songs deserve to be put on repeat for, like, two hours while others, well, don't.

So, to expedite your process of choosing a favorite, here's a definitive ranking of Taylor Swift's 1989 songs so you know which ones deserve your attention first.

This is by far my absolute favorite track on 1989 and that was a difficult decision considering the whole album is amazing. But, the real reason it got the #1 spot was because of the line, "Darling, I'm a nightmare dressed like a daydream." Kill 'em, girl.

The OG Harry Styles track was so perfectly touched with Swift's '80s influence that it'd be a crime for it to not be second on the list. And, I mean, that bridge.

I feel guilty about two Harry Styles songs making my top three, but "Style" is too good. Especially when Swift gets all sultry singing about "being there" a few times with her wandering partner.

DID ANYONE SEE THIS SONG COMING? The imagery. The darkness. I've never felt more concerned for Swift's wellbeing in my entire life, but I've also never felt so riveted by a song of hers either.

Swift's incredible "gremlin voice" in the "I Wish You Would" chorus is too good to not make the top five. I mean, it's essentially everything and she knows it.

After the top five 1989 songs, and pre-"Wildest Dreams," you're going to need a little dance break. So, there's no better time to jam out a little to 1989's first single. Also, this is pretty much the only song on the album that warrants a dance break, so that's why it lands here.

Swift's imagery, the synths, and the editing done to her voice on "Wildest Dreams" actually feels like a dream. A dream for my ears.

Again, it's really hard for me to choose my favorites when it comes to this album that I generally love SO much. But, with "All You Had To Do Was Stay," I was less impressed with Swift's vocals than I was with the songs that appear before it on this list. And, much like "How You Get The Girl" later on in this list, this track kind of seems like a follow-up to "We Are Never Getting Back Together," which is just a little unnecessary. This is the phone call Swift had with that ex that wanted to get back together that she spared us the first time.

This is a good break-up song. I mean, all of T. Swift's break-up songs are good. But I really couldn't get past my thoughts of Hilary Duff's "Come Clean" or this GIF of Swift while I was listening to this — even the "rain washing away the pain" imagery is there. Out of all of Swift's break-up songs, "Clean" doesn't surpass her earlier work.

I'll admit it, I really loved "Welcome To New York" when Swift first released it. But, compared to the nine songs before it on this list, the line about wanting who you want "boys and boys and girls and girls" just feels so forced, while the others flow so much better. It's still a fun anthem for new New Yorkers, though. Rock on, guys.

I feel like this song might've gotten more love from me if it appeared earlier on 1989. "How You Get The Girl" is Track 10 on the album and after all of the great songs that come before it, I just wasn't feeling it. So many of Swift's 1989 songs have her in control, but "How You Get The Girl" is like a gender-flipped version of "You Belong With Me." No girl or guy should "wait forever and ever" for someone to decide to love them. Sorry, T. Swift.

In comparison to other Swift ballads, "This Love" just doesn't have "it." You know, that heartbreak or yearning of Swift's other love songs. (I know she's capable and so do you.) That's why it's landed way down at the bottom of this list.

Swift's thrown some great shade in song before — just look at "Dear John," "Should've Said No," "Mean," and "We Are Never Getting Back Together." This girl knows how to throw shade, but this is, by far, the happiest shade-throwing song I've ever heard. After all of the hype, I expected more shade or more something from "Bad Blood." Skip it until the very end, but you probably won't love it.