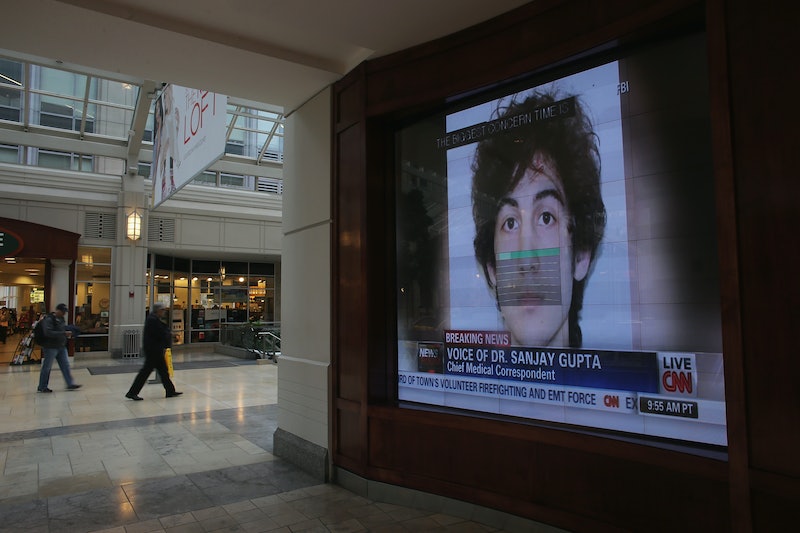 Another day, another conviction for a former friend of alleged Boston Bomber Dzhokhar Tsarnaev. Yet another player in the grisly events of the Boston Marathon bombing in April 2013 was brought to justice Tuesday, even though the University of Massachusetts Dartmouth student in question wasn't alleged to have any prior knowledge of the plot — Robel Phillipos was found guilty of lying to police, ostensibly to shield his friend from the active investigation in the hours following the lethal attack. He joins two other Tsarnaev friends who've landed in legal trouble over the incident, both who allegedly tried to hide evidence found in Tsarnaev's dorm room from investigators. They've been indicted.

Phillipos' conviction is no small matter. The 21-year-old now faces up to 16 years in prison, and, according to reports from the courtroom, he was stoic as the verdict was read. Phillipos had told police in the aftermath of the attack that he hadn't been present in Tsarnaev's dorm room when two other friends allegedly swiped the alleged bomber's backpack, which contained potentially crucial evidence. Phillipos' defense team argued he honestly wasn't able to remember whether he'd been there, because of how much marijuana he'd smoked that day — a compelling excuse for anyone who's spent a solid day or two in a collegiate cannabis haze, sure, but apparently too far a leap for the jury.

As detailed by the Boston Globe, the jury had to ascertain whether Phillipos made at least one false statement to authorities on two different days, April 20 and April 25 of 2013. Incidentally, that first date in question would certainly not be a surprising time for Phillipos to have been "high out of his mind," as his defense insisted — April 20 is 4/20, the annual party for bleary-eyed marijuana smokers everywhere.

Regardless, in spite of what Boston's local CBS News affiliate reported as a fraught process for the jury — one unnamed juror claimed the decision was "difficult," and that some jurors had initially held out for Phillipos' acquittal — they ultimately decided that yes, Phillipos knew what he was doing, and deserved to be held responsible. His sentencing is due for Jan. 29, 2015.

Of course, Phillipos' prosecution (and those of the other two Tsarnaev friends actually accused of hiding the evidence, Dias Kadyrbayev and Azamat Tazhayakov) is something of a prelude to the actual trial of Dzhokhar Tsarnaev himself. If Tsarnaev ends up being convicted for the attack, he could ultimately face the death penalty. His defense unsuccessfully argued for having the trial moved out of Boston, for fear of a prejudiced jury pool, but this request was denied by a judge — Tsarnaev's trial is currently scheduled for Jan. 5.