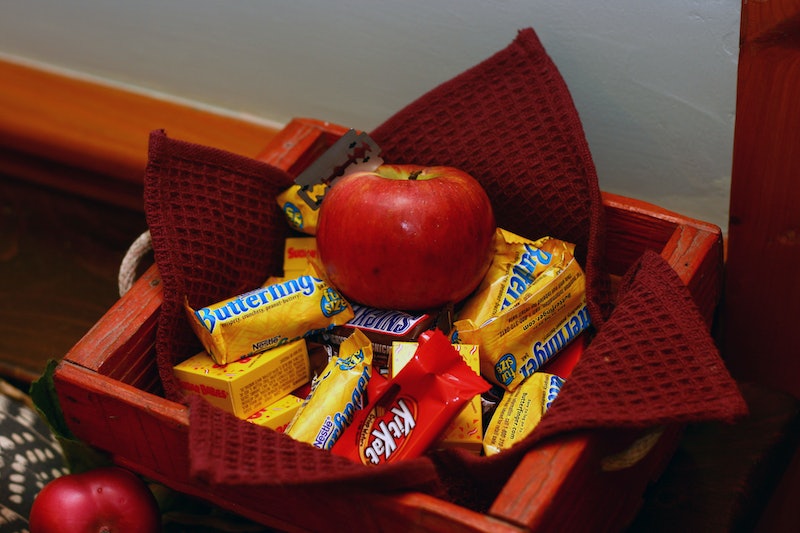 Whether they're fact or fiction, the horror stories about Halloween candy will probably never end. It’s practically a national pastime to share the stories of what supposedly happened to someone who was related to that guy, whose cousin lives in Wisconsin, and had a child who died from a cocaine-laced candy. It's all part of Halloween's spooky, paranoid fun .. right?

When I was a kid, my parents would thoroughly inspect the candy my sister and I brought home every Halloween. Anything that looked even mildly suspicious was discarded, or eaten by my father, because, “This one looks a bit funny. I should it eat, Mandy.” It was part of the Halloween tradition to get home and not only scope out what we had scored, but have my mother go through it all with a fine-toothed comb. Any apple was immediately thrown out, because apparently, somebody knew someone whose kid had a friend who choked on a razor blade and died. No one ever knew the kid’s name, but he or she existed somewhere out there in the world, so apples were just off limits (which was fine by me, because, candy).

So, in honor of the creepiest holiday (next to Valentine's Day, of course) here are some of the most popular Halloween candy horror stories, whether or not they're mostly urban legend, and the reason they exist in the first place.

In 2000, a California postal worker accidentally handed out bags of marijuana to trick-or-treaters. It was an innocent enough mistake. The man, whose name was never released, had found the bag of Snickers back in the dead-letter office and thought he wouldn’t let them go to waste. So, with Halloween right around the corner, he took the bag home to distribute the candy bars to trick-or-treaters. It was only when the kids got home and unwrapped their treats that the marijuana was spotted, further fueling rumors and urban legends of people trying to poison kids every Halloween via candy.

This is a sad one. In 1974, eight-year-old Timothy O’Bryan of Houston, Texas died after consuming some cyanide-laced candy that he had received during Halloween trick-or-treating. However, after some investigation by police, it became clear that the culprit was actually his own father.

His dad, Ronald Clark O’Bryan, had recently taken out life insurance policies on his kids in the hopes of cashing in on their deaths. To make it look like it was a neighbor who killed them, O’Bryan had also given the cyanide-laced Pixie Stix to two other kids besides his own children. Luckily, the other kids didn’t eat the candy, but Timothy did. His father was eventually executed for his murder.

This one dates back to the 1960’s, when rumors started circulating about sharp objects being put in Halloween goodies — especially apples. But this one appears to be mostly the stuff of urban legend: One professor who investigated the matter, Joel Best, found only 80 cases of razors or needles being put in Halloween candy, and almost all of those cases were hoaxes.

But the rumors were so persistent that in 1968, New Jersey actually mandated prison terms for anyone tampering with Halloween candy or fruit. That year would also see 13 razor blade-laden apples, and between 1972 through 1982, the occasional apple stuffed with something sharp would also show up, but as Best discovered time and time again, even in those cases, the reports were mostly hoaxes “concocted by the children or parents,” and not a deranged neighbor. Luckily, in 75 percent of these cases, no injuries were sustained.

In 2000, a 49-year-old Minneapolis man named James Joseph Smith took the demented time to fill Snickers candy bars with needles before distributing them to trick-or-treaters. Luckily, aside from one 14-year-old boy pricking himself a wee bit when he bit into his candy, no one was hurt.

In 1964, Long Island resident Helen Pfeil was sick of teenagers going around trick-or-treating when they were clearly too old for such fun.

So, naturally, Pfeil decided that putting an end to this behavior meant putting an end to the teenagers themselves. Depending on who you ask, Pfeil either wrapped arsenic pellets in napkins and mixed them in with candy, or she simply put together bags that included dog biscuits and steel wool pads, marking it all as “poison,” as a supposed joke. Either way, she pleaded guilty to child endangerment and enjoyed a suspended sentence, which leads me to believe that the arsenic part of the story might be a bit of an exaggeration for the sake of urban legends.

In 1996, seven-year-old Ferdinan Siquig collapsed after eating Halloween candy. Once he was taken to the hospital, traces of cocaine were found in his urine, so the media immediately went into high alert and scared the hell out of everyone for days. However, later tests found that the initial results had been wrong, and that sometimes, kids just collapse, even when they aren't high on coke.

But, in keeping with the coke theme, in 2012, a UK man did accidentally hand out coke to trick-or-treaters, because, apparently, he had mistaken them for bags of Haribo gummy candies. (Because, obviously, this is a common mistake.) The man, 23-year-old Donald Junior Green, was sentenced to 130 hours of community service and lost all the $320 worth of coke he had bought earlier that day.

In 2013, a woman in Salinas, California was accidentally dosed with what appeared to be LSD after she reached into her daughter’s Halloween candy stash and pulled out a Snickers bar to eat. Realizing something was wrong, she was taken to the hospital where doctors agreed that her symptoms were indeed on par with someone who had dropped acid. Further investigation revealed that the wrapper was also totally not a normal Snickers wrapper.

Although it was an isolated event and no one was charged with the dosing the woman (who perhaps dosed herself but just didn’t want anyone to know that she believes Halloween is better when you’re tripping) it is still added itself to the list of Halloween candy freak-outs.

The major takeaway here? For some reason, it seems that Snickers are the candy of choice for tampering. So ... snack wisely?

More like this
15 Black-Owned Liquor & Wine Brands To Add To Your Bar Cart
By Alexis Morillo
12 Aphrodisiac Desserts To Spice Up Your Valentine’s Day
By Kaitlyn Wylde
16 Trader Joe's Appetizers That Are Total Party-Pleasers
By Kaitlyn Wylde
Learning To Love, Not Judge, The Lunchbox Wives Of TikTok
By Esther Zuckerman
Get Even More From Bustle — Sign Up For The Newsletter
From hair trends to relationship advice, our daily newsletter has everything you need to sound like a person who’s on TikTok, even if you aren’t.