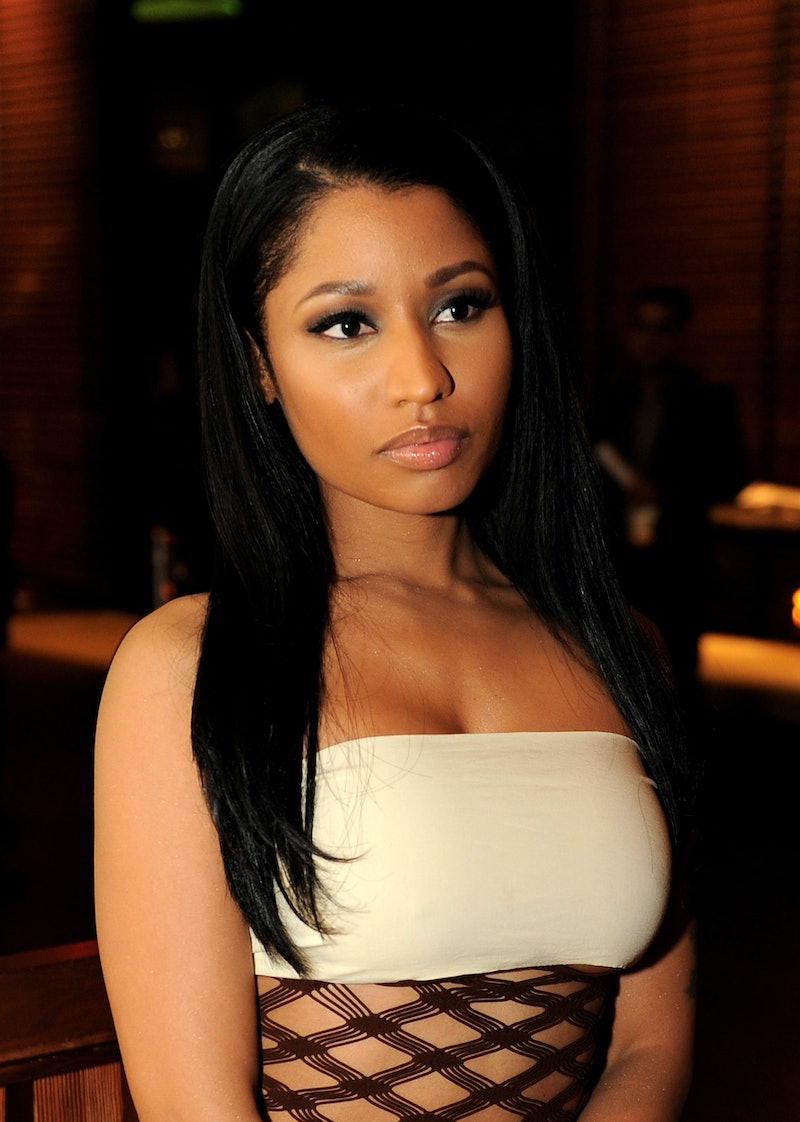 Speaking as someone who has been wanting Nicki Minaj and Drake to get together since I first saw them together, the first line of Minaj's new song "Only" (featuring Drake, Lil' Wayne, and, ugh, Chris Brown) was heartbreaking. I mean, it's not like I was living in some kind of delusion. Despite Drake appearing in Minaj's "Anaconda" music video to receive one hell of a drunken lap dance, the two have never been anything more than really good friends. I know that. However, when I was listening to the lyrics of the song, I couldn't help but notice the sexism running rampant here. It's in the first line of each verse.

Well. Aside from feeling like I need to put a censor bar on that entire paragraph, I couldn't help but side-eye this song just a little. Why does Minaj have to waste her verse defending herself from what seems to be an enduring accusation while Drake and Lil' Wayne get to spend their verse talking about all the ways they would have sex with her and, worse, how she needs them to do so because whoever she is currently choosing to have sex with is bad at it? Not to mention the implication that she's "acting like" she needs a man in her life at all. SMH.

I listened to the song over and over trying to find the point of such rampant sexism from someone like Minaj, who actively encourages women to support each other instead of tearing each other down and makes a point of telling Barbies who show up to any appearance of hers to stay in school and back up their awesomeness with knowledge. Minaj is an outspoken feminist, so this was a weird song choice for her. It's not like I'm expect rap music to suddenly morph from where it is now to the most feminist brand of music the world has ever known or anything. I mean, I listen to Eminem's music and he's never said a feminist thing about a woman in his songs ever, his daughter notwithstanding.

However, the more I listened to the song, the more I began to suspect that the sexism was the whole point. It became clear that Minaj is tired of the endless rumors that she is sleeping with her Young Money label mates and under that lens Drake and Lil' Wayne's verses become a source of parody. They are mocking the sexist attitudes that have led to rumors like this, giving us a parody version of Drake who only hasn't slept with Minaj because she's in a relationship and who is waiting for them to break up and a parody version of Lil' Wayne who thinks that Minaj needs, well, "d*** in her life" and aims to be the one to give it to her. I highly doubt Minaj would have let those verses on her track if they were to be taken seriously and I doubt even more that Minaj would be as close with Drake and Lil' Wayne as she is if they truly felt that way about her.

Was it the best way to get your point across? Definitely not. I mean, it's telling that it took me until the second repeat to stop being offended by all of that and listen to what the song was trying to say. I also had to ignore the fact that Brown was singing entirely. The disgusting, sexist attitudes that Minaj highlights in "Only" become very alarming when you think about how long she must have been having to hear this kind of thing from people, whether it was said directly to her or simply implied. I just wish her real message had been able to come through a lot stronger than the same attitudes she was parodying did.

More like this
Beyoncé & Madonna’s “Break My Soul” Remix Honors A Group Of Black Icons
By Stephanie Topacio Long
An Ultimate Guide To The Music Of 'Rap Sh!t'
By Brad Witter
Britney Spears’ Comeback Song With Elton John Will Be Her First Single in 6 Years
By Jake Viswanath
Taylor Swift Wanted To Be In 'Twilight: New Moon,' According To Its Director
By Grace Wehniainen
Get Even More From Bustle — Sign Up For The Newsletter