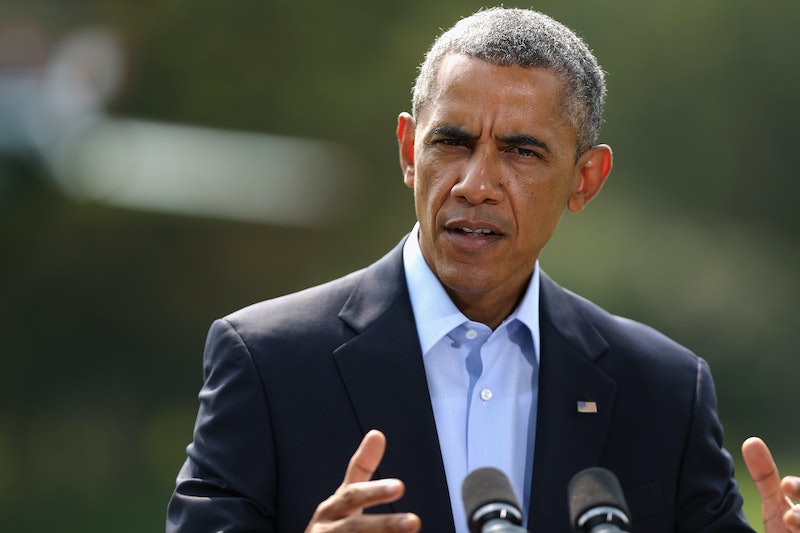 Looks like Chris Christie is in big trouble with President Obama. Following Governor Christie's decision to enforce mandatory quarantines for returning health workers from West Africa — specifically, nurse Kaci Hickox, who so far tested negative for Ebola — President Obama has decided to respond. On Tuesday afternoon, President Obama made a statement on Ebola from the White House that essentially reprimanded the New Jersey governor's fear-based decision.

President Obama opened his remarks by highlighting the bravery that America's health workers have shown and the remarkable progress they've made in the fight against Ebola. In discussing their work, Obama had three main points to make: 1) We must fight Ebola at its source, in West Africa, 2) America needs to continue its global leadership in defeating Ebola, and 3) in order to do that, we must continue to support our health workers and not discourage them from heading overseas to the source.

It's critical that we maintain that leadership. The truth is, we're going to have to stay vigilant here at home until we stop the epidemic at its source. And for that we're going to have to make sure our doctors and health care professionals in the United Sates are properly trained, and informed, and that they are coordinated if and when an Ebola case crops up here in the United States.

But what's also critically important is making sure that all the talent, skill, compassion, professionalism, dedication, and experience of our folks here can be deployed to help those countries deal with this outbreak at the source. That's why yesterday the CDC announced we're going to have new monitoring and new movement guidance that is sensible, based in science, and tailored to each health worker who may be returning from one of these countries.

Obama said that on Wednesday he plans on meeting with health workers who have returned from West Africa or are about to go to thank them and to get their input on how our policies can better help them.

He also pointed out that, despite the mass hysteria surrounding Ebola, only two people have contracted Ebola on American soil: the two Dallas nurses who treated Thomas Eric Duncan, who had contracted the disease in West Africa and was severely symptomatic. The only patient in treatment now is Craig Spencer, whose brave service we should be "saluting."

Obama also noted that Senegal and Nigeria are both Ebola-free, "in part because of the outstanding work led by Americans."

The point is that this disease can be contained, it will be defeated, progress is possible, but we're going to have to stay vigilant, and we have to make sure that we're working together.

So with all this progress being made, Obama emphasized the importance of not doing anything to undermine America's continued leadership in fighting Ebola.

We have to continue leading the global response. America cannot look like it is shying away because other people are watching what we do. And if we don't have a robust international response in West Africa, then we are actually endangering ourselves here back home. In order to do that, we have to make sure that those workers who are willing and able and dedicated to going over there in a really tough job, that they're applauded, thanked, and supported.

(As opposed to being forced into quarantine.)

Obama stressed that returning healthcare workers should be monitored in a "prudent fashion" based on science, not fear.

I want to make sure that every policy we put in place is supportive of their efforts.

The last point is in direct response to Christie's quarantine policy, which the New Jersey governor continues to champion adamantly, despite widespread criticism.

After Hickox was released from quarantine on Monday, Governor Christie defended his policy earlier on Tuesday, saying, "I don’t think it’s draconian." Christie, who was appearing on the Today show, added, "The members of the American public believe it is common sense, and we are not moving an inch. Our policy hasn’t changed and our policy will not change."