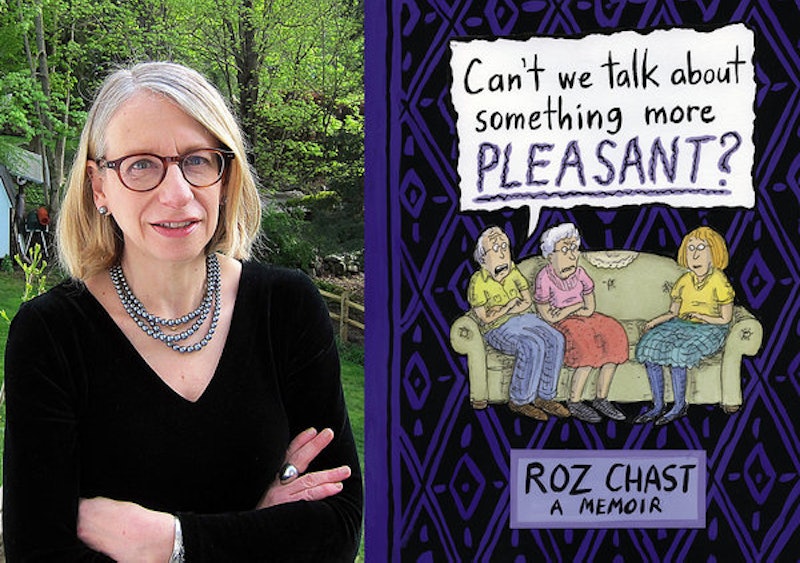 Women are consistently underrepresented as finalists and winners in book awards, so the picks for the 2014 Kirkus Prize Winners come as great news: the $50,000 prizes go to three insanely talented women. Roz Chast took home the nonfiction prize for her graphic memoir Can't We Talk About Something More Pleasant? The fiction prize went to Euphoria by Lily King, and Kate Samworth earned the prize for young readers' literature with Aviary Wonders Inc.: Spring Catalog and Instruction Manual.

Chast, the winner of the non-fiction prize, was at the center of some controversy in the literary community earlier this year. She represented the sole female nominee on the longlist (and now shortlist!) for the 2014 National Book Award for nonfiction, which sparked a ton of uproar about bias in book prize judging. The Kirkus Prize pool for nonfiction included more women than the NBA's longlist; the other female was Elizabeth Kolbert, who wrote The Sixth Extinction: An Unnatural History. I'm glad the Kirkus judges gave women more representation than the National Book Foundation this time around.

In fiction, it's always nice to see a woman honored — especially as the 2014 Man Booker Prize recently went to Richard Flanagan for The Narrow Road to the Deep North. (In case you're wondering, he beat out three other men and two women for the prize.) King's Euphoria didn't make the nomination cut for the Man Booker Prize — but Flanagan wasn't listed for the Kirkus Prize.

Beyond taking home the award, women really shined in the Kirkus Prize finalists for young readers' literature category, earning four out of the six nominations, too.

Hopefully with these wins and nominations, Kirkus' judging panels can set a precedent for celebrating more talented and worthy female writers — and we can avoid another WTF moment where only one female voice is recognized on a "best book" longlist.