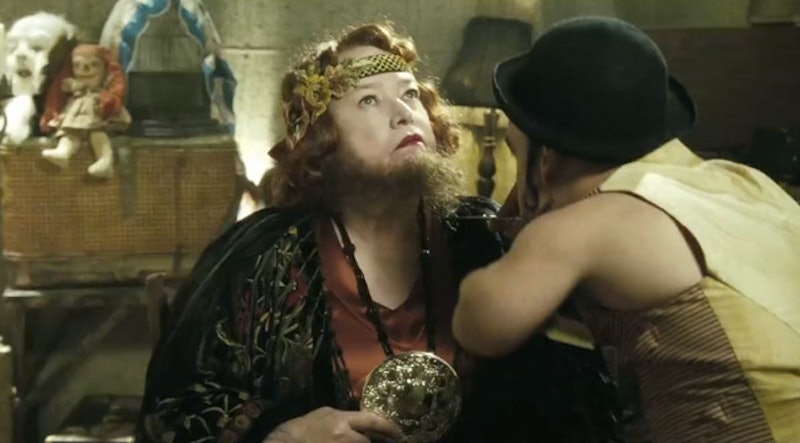 After ages of wondering and questioning, it's finally here: The real answer as to what accent Kathy Bates' American Horror Story: Freak Show character Ethel is rocking on the show. Just last week, Vox published an interview with Kara Becker, an assistant professor in Linguistics at Reed College, in which she hypothesized (a little harshly) that Ethel's accent is that of someone from Baltimore:

[W]here I think she’s trying to be from is the more appropriate question to answer. I don’t think she’s doing the best job of the accent she’s attempting, as people have seemed to note on the Internet. There’s some variability, and she’s overdoing a couple of features. But the features she’s identified are relevant to the place where I believe she’s attempting to be from, which is Baltimore.

Turns out, Becker's got a good ear: In an interview with Buzzfeed during an exclusive set visit, Bates revealed that the accent Ethel possesses is indeed a Baltimore one, and that it was a character trait she herself suggested for Ethel. "[Series creator Ryan Murphy] has a good friend from Baltimore and I’m all about that stuff. So I asked if I could have a Baltimore accent," Bates revealed. "And he said, 'Yes, but not too much.'" Bates, however, felt that "you either sound like you’re from Baltimore or you don’t," so she opted for Ethel to have a heavier accent from the large Maryland city — and, of course, got her way, because she's Kathy Bates.

To fine-tune her accent, Bates added that she relied mostly on a site called "Baltimorese," which has a list of phrases and words spelled out as a native of Baltimore might pronounce them. "It has all the words and a link to 'The Star-Spangled Banner' in Baltimorese...when I found it, I was like, 'Hoooly moooly! That’s it!'"

So, there you have it: Consider this mystery solved.

More like this
This 'White Lotus' Symbol Could Hint At A Major Character's Death
By Grace Wehniainen
Keke Palmer Just Announced She's Pregnant On SNL
By Brad Witter
The 'Firefly Lane' Book Ending Teases Way More Tears To Come In 2023
By K.W. Colyard
Everything To Know About 'The Peripheral's Potential Season 2
By Brad Witter
Get Even More From Bustle — Sign Up For The Newsletter