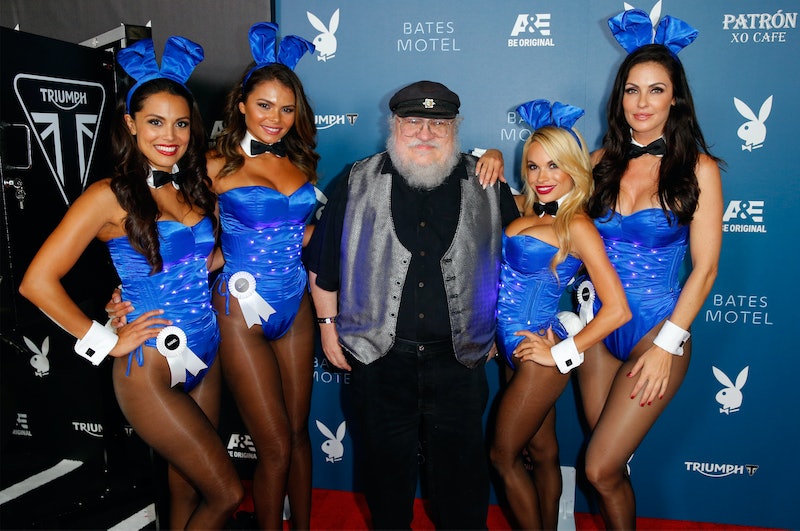 Halloween has kind of become a contest of tastlessness. Remember back in elementary school when you couldn't wait to see who would win the class costume contest? Well now, I wait around every October to see what brand will drop the most derogatory or disrespectful "Sexy [Insert Something Offensive Here]" costume and there's always tons of hopeful contestants in the running (the 2014 award will probably be going to "Sexy Ebola," though...). So when the dudes over at Playboy released a list of sexy costumes they hoped would making the Halloween party rounds this year, I groaned as I clicked. But imagine my pleasant surprise when I found myself laughing instead of cringing! Playboy's list of top Halloween costumes this year took the old trope of taking something entirely unsexy and somehow turning it into a skimpy costume, actually hilarious, and relevant in the best possible way. How does "Sexy John Oliver" sound? Yup, now I definitely have your attention...

Modeled by five of their beautiful (and good humored!) playmates, Playboy featured smart, funny, and culturally relevant costumes based off of Neil deGrasse Tyson, Alex Trebek, Joe Biden, and George R. R. Martin. How does one make a George R. R. Martin costume sexy, you may ask? Keep the beard, lose the pants.

It's probably bad that I do a little cheer whenever I see a sexy Halloween ensemble that isn't somehow degrading, but hot costumes that also manage to be smart and get a laugh will never fail to impress me. Although I'm not too keen on the idea of donning a fake mustache or Weird Al's locks come Friday night, any brave souls out there willing to give these a go?

Of course, you don't have to go practically naked to have an awesome (and sexy) Halloween getup, but if that's your thing, these are way more likely to win the costume contest than a tired cat ensemble.