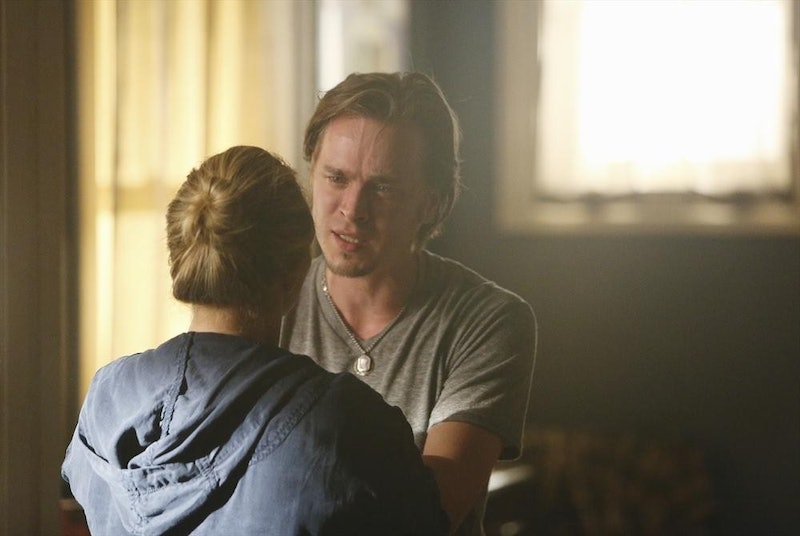 Last week's episode was quite a doozy for forlorn ex-lovebirds Juliette and Avery on Nashville. "Road Happy" showed Juliette finally telling Avery that she is pregnant with his baby via text message. Let me repeat that for both those who didn't watch the episode and those who did. Via. Text. Message. The sheer delivery of it was pure Juliette. "I'm pregnant. It's yours." Obviously Avery freaked the hell out and of course went searching for Juliette and tried to confront her about the text message's validity. By the end of the episode, Avery was still coming to terms with the news and deciding whether or not he was ready to be a proper father to this baby and, equally as importantly, whether he was willing to raise this child with Juliette. Juliette winds up in the hospital in Wednesday night's episode "Nobody Said It Was Going To Be Easy," and according to the synopsis, she will ask Avery whether he's ready to be a father to the baby. Will he say yes? And could Avery and Juliette reunite thanks to their baby? In the past I would have said yes, absolutely. But their possible romance may be a moot point if Derek Hough's Noah keeps wedging his way into the Juliette's heart.

That's right. The other big Juliette centric storyline from the previous episode of Nashville showed us that the country and the movie stars were growing closer and closer than ever. He learned about Juliette's pregnancy (thanks to Avery's outburst outside of her trailer) and Noah told her he wouldn't reveal the secret. In fact, he also showed quite the caring side by supporting Juliette, helping her hide the pregnancy from the movie crew, and even visiting her backstage at her tour. He was also the one who caught her while she had trouble breathing and fainted after walking off the stage. Watch the preview for Wednesday night's new episode below.

So far it seems like Noah is really stepping up to be an important source of affection and good for Juliette, which she definitely needs right now between the pregnancy, health scares, and stress in her life. She already had a scare where she thought she had a miscarriage, bringing Rayna rushing to her aide. Now Juliette has Noah, who has already shown a romantic interest in her and has also been through a difficult breakup. So he can relate to her pain — or so he thinks. But Noah's relationship ended because his girlfriend betrayed him, and he assumes Avery did the same to Juliette. Will his idea of Juliette change if he discovers that the truth is the other way around?

And where will Avery fit into all of this? If taking on the huge responsibility of being a father will help Avery out of his horrible downward spiral, I am all for it. I think that an Avery with his act together can be a terrific father. He would definitely love that baby more than anything. But if he and Juliette can't be in the same room together without making each other miserable, Juliette needs to let the idea of Avery being in her life go for the time being.

Noah seems to be a great alternative thanks to the positivity he brings to Juliette and right now, that's all she needs. Avery doesn't necessarily have to forgive and reunite with Juliette to be a father, but he does need to be supportive of what she is going through, regardless of what happened between them in the past.