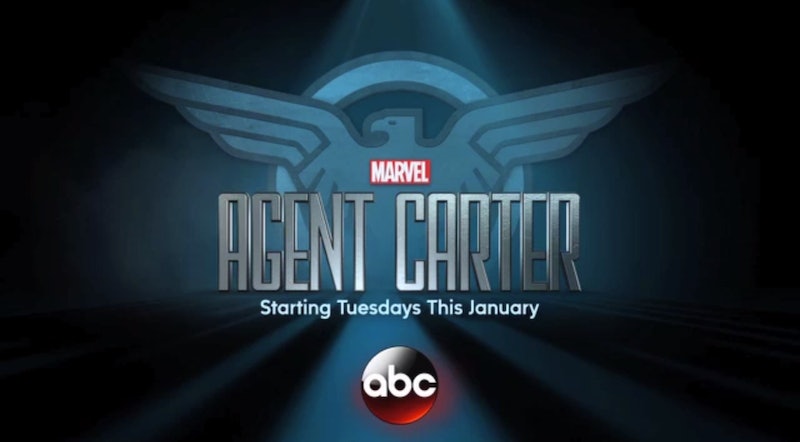 I don't know about you, but for me Agent Peggy Carter was the most compelling character in Captain America: The First Avenger, second only to the good captain himself. Sure, Peggy Carter was a case of wasted potential, especially when compared to some of the other Marvel leading ladies, but the upcoming ABC series Agent Carter aims to fix all of that. By giving Peggy the spotlight and showing how she takes S.H.I.E.L.D. from an idea to an international company after the disappearance and presumed death of Steve Rogers, we'll finally get a chance to see her shine. Which is sort of what happens in ABC's official first teaser for Agent Carter. Sort of.

From the moment the teaser opens, you're going to want to cry sexism. After all, in a Sin City-esque move, the first we see of Peggy Carter is her delicate leg as she rolls up a sheer stocking while wearing a red robe that is artfully hanging open. The very next shot after that shows her reaching for her gun and badge from their place among her jewelry in a wooden box atop a white doily. By the time the voiceover says the series tagline — "sometimes the best man for the job is a woman" — you finally realize that Marvel is comparing and contrasting the stereotypes of the times to show how Peggy blends and then exceeds them.

Captain America was set in the 1940s, a time when "women were women and men were men", where men did the fighting and women did the fawning, where Agent Carter had to put up with a lot of sexism to get to her position in the military — and where she was the only woman to be found for miles that close to combat. By showing that getting ready in the morning, for her, includes rolling up her stockings like any woman of that time before grabbing her gun like any man of that time, Marvel expresses perfectly why it is that Agent Carter was more than worthy of her own eight-episode TV series.

According to The Hollywood Reporter, the series is now described as, "Agent Carter takes place in 1946, with Carter stuck in an administrative job with the SHIELD precursor Strategic Scientific Reserve. When her pal Howard Stark is framed for a massive crime, she must work to clear his name and find the real perpetrators." This is so much better than the early description of the Agent Carter, which painted it as Peggy spending her time "going on secret missions for Howard Stark all while trying to navigate life as a single woman in America, in the wake of losing the love of her life–Steve Rogers". It's a relief to know that the ABC series has finally figured out that Peggy Carter is so much more than just her love life.