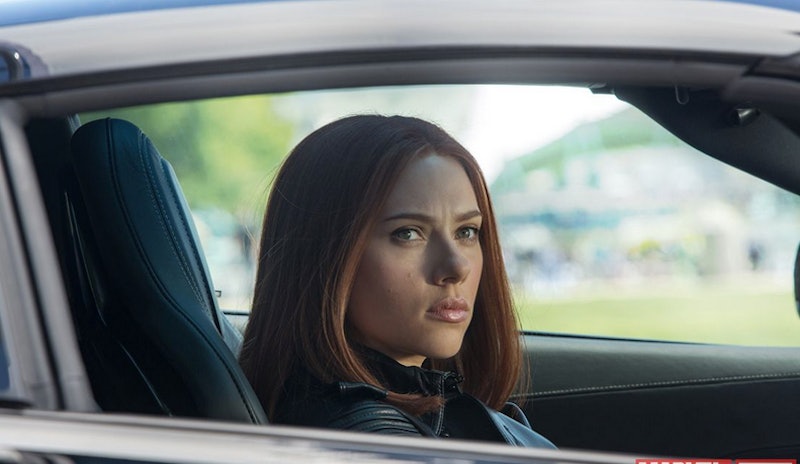 Hey, Marvel. Stop dragging your feet on that whole giving the Black Widow her own movie thing. While we twiddle our thumbs and wait for Hollywood to get the message that it's time to start putting female-led superhero movies back on the big screen (surely, Catwoman is a distant bad taste in their mouths by now), Captain America: The Winter Soldier promises to feature not only Black Widow, who we've come to know and love from previous movies in the Marvel Cinematic Universe, but also introduce Sharon Carter, better known to comic fans as Agent 13. Captain America 2 might be a better movie than The Avengers was, but the question we should be asking is what about the women?

To be fair, the MCU is pretty good about treating their female characters well. We all saw what a mess Tony Stark's life would be without Pepper Potts backing him up and there's a reason Steve's first reason to be devastated about waking up in the future was missing a date with Peggy Carter. Of all the movies that fill the time between The Avengers films, which one treated their leading lady the best?

Despite the fact that The Incredible Hulk is only loosely part of the Avengers package seeing as they recast the Hulk between the movie and The Avengers, Betty Ross is still worthy of consideration. However, her sole role in the movie was as Bruce Banner's love interest, being either defined as General Ross's daughter, as Bruce's lover, or as Leonard Samson's girlfriend. Betty didn't seem to have much in the way of personal motivation outside of the hero and that, combined with the fact that the movie didn't do as well as the others, means she's a candidate for last place on the list.

Agent Peggy Carter is the queen of verbal beat downs. We didn't get to see her in action nearly as much as we should have in Captain America: The First Avenger, but she still managed to do a lot with the few scenes that she got. From her interactions with the soldiers, we saw a portrait of a woman who was stubborn, fair, modern, and downright ballsy. There was so much more that could have been done with Peggy that the movie didn't cover, but since we'll be seeing her again in Captain America: The Winter Soldier, there's still time for her to move higher on the list.

Jane Foster is a science hero of epic proportions. The saddest part of The Avengers was the fact that scheduling conflicts prevented Natalie Portman from reprising her role as the astrophysicist who might've been the only other person in the world who could understand Bruce and Tony when they were talking. The movie may have been called Thor, but it's easy to argue that the movie was really about Jane and how Thor crashed into her life (literally). Nor did Jane remain passive through the movies. She may not have Asgardian strength, but she does have above average intelligence and that carries her out of every situation.

How is the Black Widow number two? She took down a room full of men while tied to a chair. She rode a Chitauri ship to get to the portal and gave Hawkeye a heart attack. She went toe-to-toe with Tony Stark in the boxing ring and — she's the Black Widow. Natasha clocks in at #2 on the list mainly because she has yet to become a leading lady. Her appearances in the MCU have been as part of an ensemble cast and until Captain America: The Winter Soldier comes out and puts the spotlight on her or until Marvel finally does that Black Widow movie, then they're underutilizing her as a character.

Pepper Potts quite honestly should have walked away with the crown from the start. Not only was she running Tony's life with an iron fist (pun intended), but she also rose to the position of CEO from secretary in one hell of a promotion and saved his life in the first movie and in the the third. Pepper is as much a protagonist of the movies as Tony is, not just because of her relationship with him, but because she has all of the smarts and social savvy and none of the volatile moods and alcoholism. Tony was important to her, but she also had ambition, friends and a life outside of him, and no time for his shit.