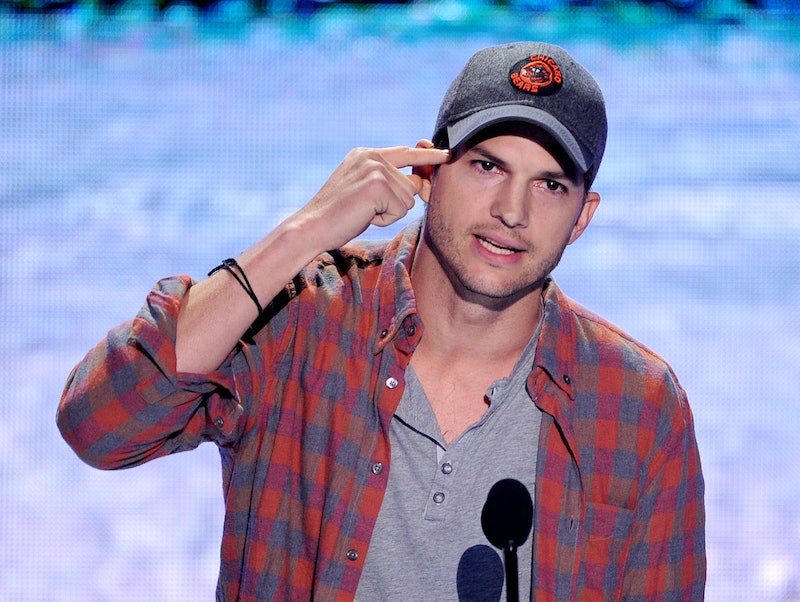 Ashton Kutcher wins the celebrity new parent award, which is, granted, not a real award and more of an honorary golden star from me. But it counts in the heart, and that’s really what matters anyway! The new dad and his S.O. Mila Kunis have been busy taking care of newborn Wyatt Isabelle for a few weeks now, and judging by his interview on Conan Tuesday night, Ashton Kutcher has some great new dad tips especially for celeb parents. For instance, after coming home from the hospital, Kutcher immediately reserved his daughter’s name on social media platforms from Instagram to Twitter. Now at first, I took this to be rather foolish. I did scoff at the idea when I first read that parents were securing domain names for their babies, but to Kutcher, it's a preemptive measure that makes sense. Considering this dad is social media savvy and a former celeb prankster, it's almost necessary.

Now I get why it's a good idea to save your baby's Internet real estate for when they grow into an angsty teen who will blog their feels, or maybe even just to prevent anyone else from grabbing that domain name, Instagram username, or Twitter handle. Even if no one turns these things into porn hubs, it will at least save them for your baby and his or her future selfies or tweets. Of course, this makes more sense when it comes to celeb parents, because who knows what will happen to that baby's name online. There's a guy out there who owns (and makes money!) from ebola.com for goodness sake.

So like Angelina Jolie and Brad Pitt, who saved all domain name versions for their daughter Shiloh, Kutcher went ahead and grabbed his daughter's, then took it to the next level to grab the social media pages too. This means that her parents are now in charge of her future accounts — pro move as this means she can't start her own (at least with her own name) until they say when.

Didn't think Kutcher would be such a deep well of parental advice did you? He has even more:

When brainstorming for your future child's name, just say anything. The new dad told Conan that he just said any name that came to mind until Kunis approved:

We were going to a Lakers game and I’ve got name Tourette’s. I just started listing off anything and everything that I saw. I was like, "Sign! Truck! Wall! Door!" She’s like, "Shut up!" I’m like, "If you don’t accept my bad ideas, you’ll never accept the good ones." Then I was like, "All right, I’ve got a really dumb idea. What about Wyatt?" She goes, "That’s it." I was like, "Really? I did it?" She was like, "Yeah, that’s it."

How to Be a Baby Whisperer

Basically just pay attention. Kutcher joked that he likes feeling heroic all the time — to the point where he mocks putting his baby in danger to feel gallant — but he also says that paying attention to the little things about his newborn gave him a deeper understanding of that new pooping-crying-machine. He jokingly admitted:

I have a personal "I want to be a hero" ego thing. It fulfills all of that. Staying home for the first couple of weeks, I’ve learned the little things that will calm the baby down. So, I feel like I’m a baby whisperer now. I like to give the baby to my friends and let it cry for a second and be like, "Let me just take this." Any sort of hero fantasy I have is completely satiated.

Right, so don't pretend to drop your baby or anything, but really just paying attention to the details will make you a complete baby whisperer, because if Kutcher can do it, surely you can too.