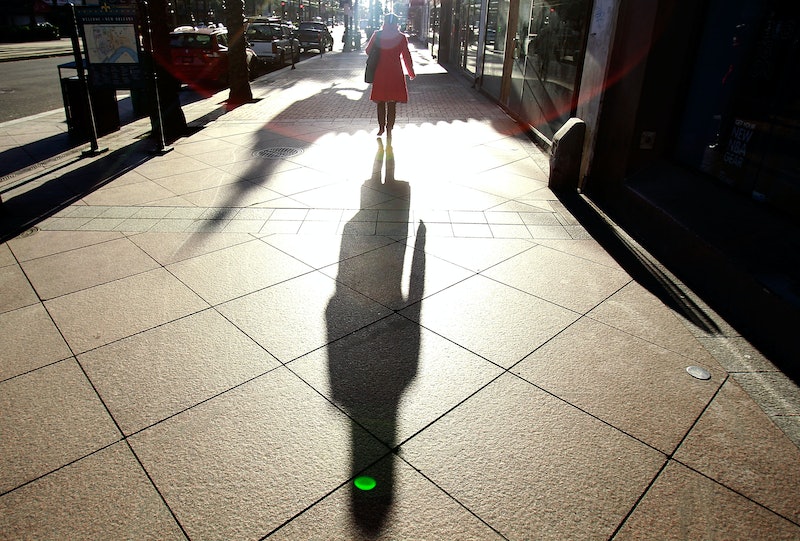 I never cease to be astounded by the way that some people react to stories of harassment in the street. Just yesterday, we shared a story about a woman who taped herself walking around New York for 10 hours and the unsolicited harassment she was subjected to as she strolled around, minding her own business. I retweeted the post from my personal account, and while many sane people expressed support for the article, some responded with questions like, "But don't you think some of those guys were just trying to be nice?" No. No I don't think that. Not for one second. This was not a surprising response; you can't share an account of a woman being harassed without a million men (and, to be fair, some women) chiming in, questioning whether or not what happened could accurately be described as "harassment." In those moments, much like this moment we're experiencing in the wake of this video, it becomes crystal clear: So many people have no idea what does and does not constitute harassment.

Here's the thing: by the inherent nature of being a woman walking in the street, almost ALL uninvited attention from men is threatening. Women are victims of sexual violence EVERY SINGLE DAY, even in "liberal" cities like New York. Whether it's a man jerking off on the subway, a stranger sticking their hand up a woman's skirt (or worse, raping her), we hear stories of sexual assault on a near daily basis, if not on the news, then from the anecdotes within our social circles. Women feel vulnerable on the street, period. When a man interacts with her on any level she did not invite, it's threatening, period. You can't change that just by saying someone is being "nice." Just because a man isn't overtly saying "I want to fuck you in the ass and cum in your hair, bitch," it doesn't nullify the threat a woman feels.

And here's the other thing: we can tell when someone is just being nice. In fact, after enough years of encountering enough different kinds of people engaging in enough different kinds of interactions, all women (YES, ALL WOMEN) develop a sixth sense: We can immediately tell if someone is, in fact, being "nice," or if their seemingly innocuous words or actions are laden with latent undertones of objectification and entitlement, and the threatening implications that go along with someone who holds that view — who views you as a less-than-human thing which they want and feel entitled to have — has set their sights on you. We can tell. So it doesn't matter what actual words they say, if any. And for someone to argue about the relative threat level of the words themselves if to completely signify a lack of understanding about where the real perceived threat comes from. In other words, if you tell a woman that an act of "harassing" wasn't, in fact, "harassment," all you're saying is: "I don't understand anything about the experience of living your life."

If someone tells us our shoelace is undone, or a neighborhood local gives us a morning nod while they're walking their dog, we can identify these things as inherently nice behaviors. No one is hysterically declaring ALL public interactions between men and women who don't know each other to be harassment. But the sad fact is that often they are. And even when a man says something as simple as "Have a nice day," we are able to read between the lines and know his motive, and 9 times out of 10, it's not about well wishes. It's the tone, the setting, the look on his face that tells a woman that there's a sexual power play at work, and she's losing.

When someone (usually a man) defends certain behaviors as "innocent" it shows a lack of understanding of the deeply ingrained, totally imbalanced gender dynamics that exist on a city street, and between men and women on a more general social level since time began. Think of it like this: an assault, in the eyes of the law, is anything that either causes grievous bodily harm or death, or something that creates a reasonable fear of grievous bodily harm or death. Street harassment that doesn't involve touching is the latter, directly causing a woman to fear for her bodily integrity and in some cases her life. No one should have to walk down the street with that constant fear. The following six things are often seen as innocuous, but there's an undeniable implication behind all of them that makes them unequivocally harassment.

1. TELLING SOMEONE TO "SMILE"

Men often think they're doing you a favor by telling a woman to "smile" in the street. But guess what? A woman can do anything she well pleases with her facial expression, whenever she wants. Women NEVER tell other women to smile in the street. They never tell men to do it either. That's because there's an inherent dynamic within our culture that (even subconsciously) makes men believe:

Because of this dynamic, being told simply to "smile" is harassment that reinforces this anachronistic power structure, leading women to feel out of control, and potentially in danger.

No, I'm not talking about saying it when someone sneezes. Why did you have to go and bring God into it? Just because a man uses God as a means to interact with a woman he doesn't know on the street doesn't make what he's saying, or the way he's saying it, acceptable. Example: I have walked alone down the street to have a man follow me for two blocks repeating "God bless you, beautiful," "God bless your beautiful body," and "God made you so beautiful." God does not shield you from being a dirty, threatening prick. Anything said to a woman by the man under the protection of "God" is JUST AS THREATENING as any other kind of sexual comment. And to the people for whom God is a special thing, using him as a weapon of harassment is doubly offensive.

I want to be very clear about this, because it seems to be perpetually misunderstood: Complimenting the physical appearance of a random woman on the street is not a compliment. Even if you think of it as a compliment, and think you're being nice and that she should feel glad to have received your compliment, well, that view is indicative of a really problematic mindset that says your opinion matters enough for us to want to hear it. Women should be allowed the sanctity of their own self-image without the influence of the male gaze.

This kind of interaction on the street is also a reminder to a woman that she is being viewed constantly as an object. The implications of this are as follows:

This again suggests that a woman only exists in public to satisfy the male gaze. Being complimented by a stranger for her nice dress or top is just as insulting as it is harassing. Especially when the compliment is handed out with a kissing or purring sound effect, a hip thrust, or even a bedroom tone voice. Again, we can receive compliments that are given out of kindness. For instance, there's an elderly man who lives on my block and when I see him on the street and I'm dressed up to go out he'll tell me I look lovely. He's pretty much a stranger, I don't know his name or anything else about him. But he's not eye-fucking me when he says it, and there's a sincerity in his tone that's absent from say, the bloke I encounter two blocks down the street who will say the EXACT same thing but with one hand on his belt loop and the other on his chin while he licks his lips. The majority of cases are the latter guy, the former being almost a complete anomaly.

Just because you haven't said anything is doesn't make give you immunity: You are still a sex pest. When a man stops what he's doing, and follows a woman as she walks towards him, by him, and past him, it is creepy, and leaves a woman fearing for her bodily safety. You can look at a woman you're attracted to in the street (just as women can check out men in a respectful way, but we won't get into the issue of "is it okay for women to do things that are labeled as threatening when men do them?" because the short answer is: It's entirely different because there are radically unequal power dynamics at play, and you know it.) but there's a huge difference between a fleeting silent admiration and a prolonged leer. Being stared at creepily makes women feel singled out and just as victimized as when they're spoken to.

5. SPEAKING TO SOMEONE WHO CLEARLY DOES NOT WANT TO BE SPOKEN TO

I think it's safe to assume that a vast majority of people don't leave their house in the morning looking for a conversation with a stranger on the street. Men assume this about other men. I have NEVER heard a man I know say something like, "This dude on the street complimented my jeans." Probably because, even if someone liked said jeans, they know better than to bother someone who is trying to go about their lives. The same respect and, indeed, dignity, is not afforded to women. Women, it seems, are expected to receive engagement from strangers without question. Unless there's something circumstantial that creates cause for polite conversation (the loose shoelace, for instance), there's no reason to assume a woman would like to be spoken to, especially when it's clear such interaction is sexually motivated.

6. BECOMING INCREDULOUS WHEN YOU ARE IGNORED

Finally, a woman has EVERY right to ignore a man harassing her on the street. She's more than at liberty to walk by in silence. When a man becomes angered over this, or seeks a reaction out of the woman, THAT IS A FURTHER HARASSMENT. Even if you argue men have the "right" (LOL forever) to compliment women on the street, it should follow that you argue women have the right to ignore said compliments. Unfortunately, those who argue in favor of the former seem to disagree with the latter. A woman does not have the obligation to acknowledge anyone they don't want to acknowledge, especially when the person seeking acknowledgment has already gone out of their way to make her feel vulnerable and threatened in an environment that should be as equally safe for her as it is for him.

More like this
Wimbledon Alters All-White Kit Rule Amid Candid Period Discussions
By Catharina Cheung and Rachel Mantock
Think Keeping Your House Nice Has To Be Hard? These Clever Things Will Prove You Wrong
By Rebecca Martinson
Here’s Your Daily Horoscope For November 30, 2022
By Mecca Woods
Here’s How To Find Your Spotify Wrapped
By Emma Lord and Emma Carey
Get Even More From Bustle — Sign Up For The Newsletter