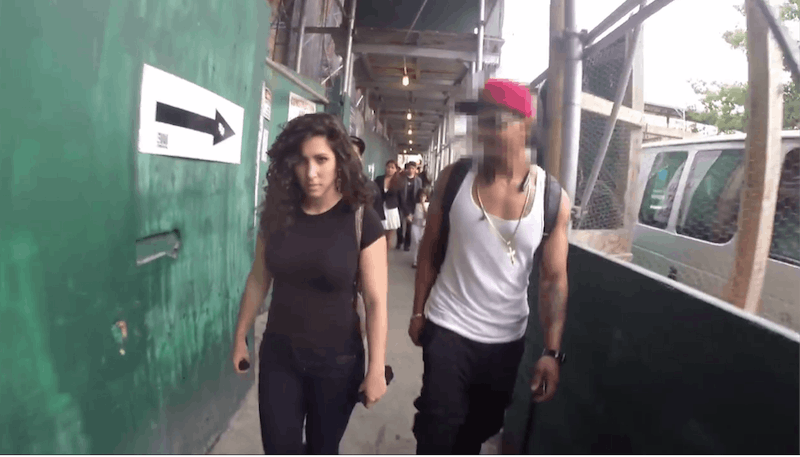 Unfortunately, cat calls and invasive comments toward women in public have become less of a surprise and more of an expectation, and this video depicting the street harassment of a woman walking silently in New York for ten hours is a grim and painfully accurate representation of the problem. The woman in the video, actress Shoshana Roberts, walks in well-populated areas of Manhattan in nondescript clothing, heeding to all the so-called "rules" of keeping yourself safe as a woman in a big city, and even then she is subject to over one hundred instances of street harassment over the course of a day.

In all honesty, the video is almost hard to watch, especially because it summons up all too familiar feelings of fear for any woman who has ever been harassed by a stranger. One hair-raising moment perfectly sums up the misguided notion that street harassment is a compliment, when a belligerent man makes several comments about her appearance and then calls after her, "Someone's acknowledging you for being beautiful!" As if she should be grateful, as if she somehow owes this douche nozzle for yelling at her on the street.

The harassment comes from men of all ages and backgrounds, and the most unsettling moment by far is when a man walks beside Roberts for not one, not two, but five entire minutes in complete silence at an uncomfortably close distance, in a move that is clearly meant to intimidate her in some way. Another man pursues her for several minutes asking for her number, asking if they can be "friends," and then asking if he's "too ugly for her," further reinforcing just how unbelievably aggressive street harassment can be even when there are plenty of onlookers who would supposedly discourage that kind of behavior -- including the man filming the project, who was only a few feet ahead of her with a hidden camera the whole time.

The video was produced by the nonprofit group Hollaback!, which aims to end street harassment for women worldwide, and I cannot praise them enough for the way that they captured this incredibly real and frightening phenomenon. In the past we've seen videos depicting street harassment that have entirely missed the mark, and it is a relief to see a group that is this committed to fostering change without making a big joke out of something that has become a daily reality for women.

More like this
34 Quotes That'll Inspire You On Juneteenth & Beyond
By Syeda Khaula Saad and Siena Gagliano
How To Fight For Reproductive Rights, Based On How Much Time You Have
By Courtney Young
12 LGBTQ+ Organizations To Donate To During Pride
By Mariella Mosthof and Bustle Editors
Black Pride's Lady Phyll Is Already Thinking About The Next 50 Years
By Sam Ramsden
Get Even More From Bustle — Sign Up For The Newsletter