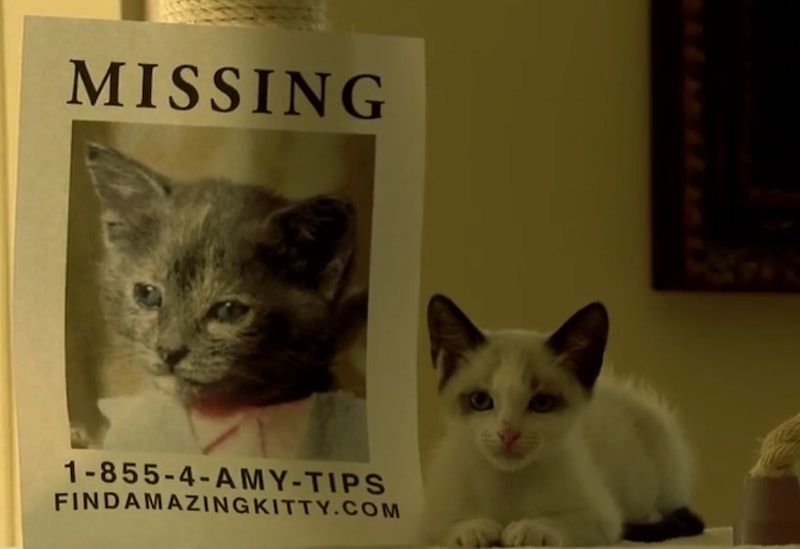 Judging from all the articles on its box office debut, which use lots of phrases like "bolting to the top" and "career best," chances are you've seen Gone Girl by now, or at least caught the trailer (unless you're me, because I'm a terrible cinephile who refuses to pay to watch movies that feature fewer than four explosions). However, you're going to want to check out the latest trailer, because it's not what you're expecting: YouTube group The Pet Collective remade Gone Girl with kittens. Now there's a movie I would watch, explosions or not. Gone Purrl (ha!) is the latest in a series of trailers remade by the group. My personal favorites include the "Cute Kitten Version" of American Horror Story, which uses a half-inflated balloon as a stand-in for the Rubber Man, and of course, the retelling of Hocus Pocus. The only flaw of that one is that it doesn't have pre-Sex and the City Sarah Jessica Parker, but I suppose access to a time machine is probably too much to expect from a YouTube channel. The rest of The Pet Collective's channel is entirely devoted to puppies and kittens, and it's so cute you guys. Don't follow that link unless you're prepared to watch three hours of baby kittens attacking feather toys or a baby husky falling asleep in a cowboy hat. I would know; I bravely made the sacrifice of checking out the channel for everyone already. My life is so hard sometimes.

Anyway. Coming from someone who's never seen or read Gone Girl (crazy, I know, considering everyone has lots of opinions on it), the kitten trailer was a little confusing, so I watched the real trailer. It didn't really help with the confusion — Ben Affleck probably killed his wife but that wouldn't make a very good movie so I'm assuming it gets complicated? — but it did look pretty cool. Plus, it didn't have the weird accents of Gone Purrl. You can compare the trailers below:

Does anyone else agree that the real Gone Girl could use some more kittens? Just me? Awkward.