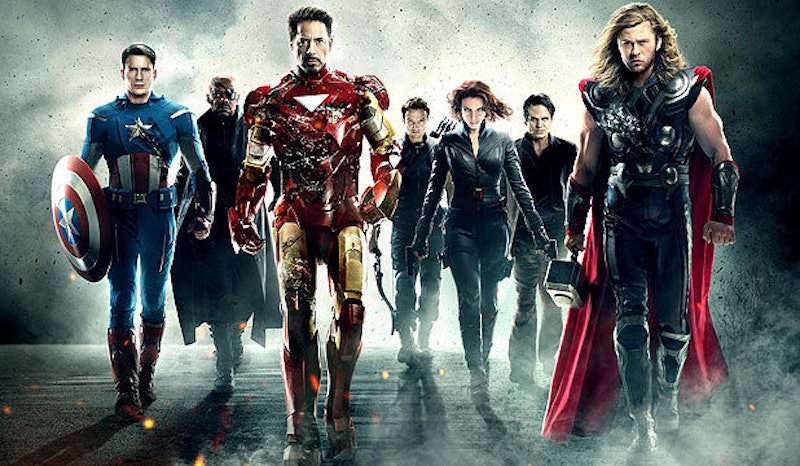 It's official: Marvel has released an impressive nine film line-up of super hero for the next five years. That is a big, almost ridiculous undertaking when you think about it. How exactly do you execute that many films in such a short amount of time, and more importantly, how do you do it properly? Well, trust me, I have notes.

Now, I'm not an enormous super hero buff. I have a moderate emotional investment in the Batman universe (unimpressive, I'm sure), and Sailor Moon manga from dark times in sixth grade, but my comics were usually about shady, spooky characters who wore too much eyeliner. Short version: If you ask if I'm Marvel or DC, I usually go for Slave Labor Graphics. I'm interested in shades of gray, the battle of good and evil doesn't particularly stir me.

Still, I know and respect that it stirs a large portion of the general population. Seeing these characters brought to screen is exhilarating for a lot of people, and as my brother (who IS much more invested in these things) pointed out, no matter how ridiculous it seems, people are still going to watch them.

With all this in mind, here are some of my (somewhat) legitimate concerns about Marvel's Phase Three line-up.

The Cap and Iron Man are returning for this one, so at first I thought it was just like, they fight over the last Capri Sun in the fridge and it becomes a WHOLE thing. Turns out, they're legitimately focusing on going back in time, adapting the actual American Civil War plotline from the comic books. I'm skeptical, but it worked for X-Men. Besides, Tony Stark and Scarlett O'Hara: I ship it.

My only commentary on Doctor Strange is strictly a concern of fashion. I mean, he has the most whimsical cape of all time (that collar), and hasn't The Incredibles tackled the troublesome logistics of wearing a cape? Only time will tell if it makes it into the movie.

Guardians of the Galaxy 2

By all accounts the first movie was hilarious and smart and it wins by not taking itself too seriously. Following that same format would be ideal, because let's be honest, I don't think anyone could sincerely digest a plot line about Rocket Raccoon struggling with PTSD.

It's Thor's robot clone, who apparently also fights in the Civil War, too. I'm not making that up.

So the thing about Ragnarok is, I mean, I'm not a fan of blonde-and-muscle-y types, but you look at someone as gorgeous as Chris Hemsworth, and you think, "Why would we need an off-brand version of that when we have the original? Why mess with perfection?" Then you look at Liam Hemsworth and you think, "Actually, the off-brand version is totally fiiiiiine." So my biggest concern, of course, is will Ragnarok be hot, too? This is why, for the record, I usually have to steer clear of these superhero conversations.

People love their Avengers. Of note, though: why exactly did we feel the need to pull a Deathly Hallows with the Avengers and not focus on a Black Widow film? I mean, I appreciate that she appears as a side character in everyone else's movies (Iron Man 2, Captain America: Winter Soldier) but seriously everyone else got a turn. OK, maybe not Hawkeye, but would you really watch a Hawkeye movie?

Despite some teasing earlier in the year, there doesn't seem to be a Black Cat film on the horizon, and, we've already addressed the issue with Black Widow. So that puts a LOT of pressure on the success of Captain Marvel, the only solo female super hero featured in this entire nine movie line up. Very scary. And look, I'm not saying we HAVE to get Joss Whedon involved, but he understands that the way to write a "strong female character" is by writing them like any other human being, not a frivolous sex object. I know I'm not alone in saying that I still get bad Halle-Berry-as-Catwoman flashbacks.

Basically a group of super humans with special powers (I know, crazy, right?). In the comics the Inhumans have members that have been part of both the Avengers and the Fantastic Four, so my question is, what makes this group different from the Avengers and the Fantastic Four? As one of the last in Phase Three's superhero block, and a film that'll be sandwiched between two Avenger's flicks, it's going to get lost in the fold if it's not careful.

All I'm saying is, it better be one hell of a war if I'm paying for two tickets.