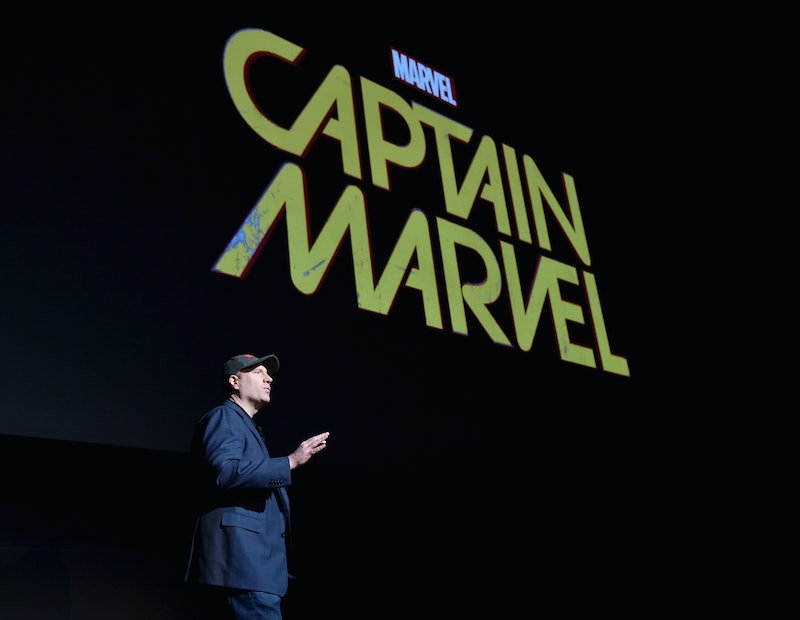 Among the slate of familiar titles Marvel Studios announced at the presentation of its Phase III line — sequels to Thor, Captain America, and The Avengers movies — were a few that movie fans might not recognize. One particularly worthwhile prospect that might suffer from the limits of its reputation (not to mention is particularly bland name) is Captain Marvel. But generic moniker aside, Captain Marvel could be one of the most interesting tasks that the studio has on its plate: its first super heroine film.

The Captain Marvel identity has attached to many different characters since its creation in 1967, most of whom were men. But the latest and arguably most prominent Captain Marvel is Carol Danvers, who has held the title since 2012 and will play the focal role in the upcoming film (set for release in 2018).

Danvers has a particularly interesting history, both under the Captain Marvel handle and beyond it. Though the celebrity of her role might pale in comparison to those of the Avengers heroes at present time, Danvers has actually got quite a bit more meat to her story than some of her male counterparts… not to mention a hell of a lot more in her pocket when it comes to superpowers. (Sure, Captain America, Thor, Iron Man, and the Hulk are all… strong… but really, what else do they have? Yes, yes, a few of ‘em can practically fly, but technology is only, like, two years away from that for the rest of us anyway.)

As such, to anyone yet uneducated in the various interesting facets of Danvers/Captain Marvel, here are a few noteworthy tidbits to garner investment in her upcoming movie.

SO HERE’S WHAT SHE CAN DO

Danvers’ list of powers have, at various instances throughout her 46-year run in the comics, included all the usuals — super strength, durability, stamina, combative skill, all that jazz — plus flight (at six times the speed of sound, no less), psychic abilities (she’s been credited with bearing each a “sixth” and “seventh” sense), and manipulation of energy sources like stellar bodies, particularly one very powerful white hole.

AND HERE’S WHAT SHE’S DONE

The character was created initially as a security officer in the U.S. Air Force who crosses paths with the original Captain Marvel (a Kree alien named Mar-Vell, and a dude). An accident lands her with superhuman abilities — as is almost always the case in Marvel stories — intertwining her DNA with that of the Kree species and affording her some of the abilities mentioned above, cementing her identity as “Ms. Marvel.” She has also assumed the identities of Binary (via a genetic experiment — oy, this woman’s poor molecules) and Warbird. Under these varied aliases, Danvers has worked with the Avengers, the Defenders, the X-Men, the Guardians of the Galaxy, and others.

SHE’S ALSO WORKED AT THE CIA, NASA, AND THE DAILY BUGLE

Not at the same time. Danvers graduated from the Air Force to earn a position in the CIA, and later oversaw security at Cape Canaveral for many years. The next chapter of her life took her into the civilian world, where she landed a gig at Peter Parker’s own The Daily Bugle (often butting heads with ferociously conservative editor J. Jonah Jameson).

SHE WAS ACTUALLY CREATED WITH FEMINISM IN MIND

Danvers was dreamt up by Roy Thomas, but was brought to life in earnest by Gerry Conway. Regarding her ascension to comic book stardom in 1977, writer Conway cited an interest in paralleling Danvers’ journey with that of the contemporaneous American woman’s climb toward “raised consciousness, for self-liberation, for identity.”

BUT HAS BEEN THE SUBJECT OF CONTROVERSY

On top of being the subject of a series of fan complaints about the sexualized nature of her uniform, Danvers was also the center of the highly controversial Avengers # 200, printed in 1980. In the story, Danvers is hypnotized and kidnapped by Marcus, alleged son of Marvel supervillain Immortus, and couriered to an alternate dimension, wherein she (under the influences of his powers) has sex with him and bears his child. The casual nature with which these plot points are met by the other characters in the issue incited outrage among a number of readers, not least of all comic book historian Carol Strickland, who panned the story in her essay, “The Rape of Ms. Marvel.”

Though her name and military background might hearken most to Steve Rogers, Danvers isn’t saddled with his doe-eyed earnestness. She’s wry and clever, though notably less rough around the edges than the painfully sardonic Tony Stark.

Danvers’ Warbird era in the 1990s saw the character struggle with alcoholism following emancipation from some of her more cherished powers. The plight interferes with her work as a superhero, landing her a suspension from the Avengers after an intoxicated display on duty.

AND SHE'S PRESENTLY HANDLED BY A PROLIFIC FEMALE WRITER

OH, AND SHE’S GOT A FLING GOING WITH RHODEY

But they’re trying to keep it on the DL, so don’t spread it around.