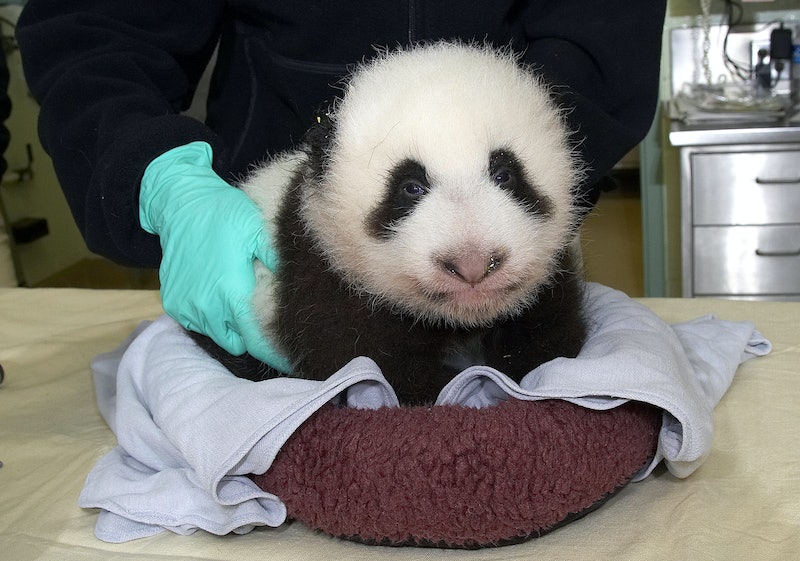 Some pretty exciting news came out of Galapagos National Park on Wednesday. (Now there's a sentence I never thought I'd type.) The Española Galapagos giant tortoise, once one of the many species on the brink of extinction, has made a comeback and is being reintroduced to its home on Española Island. After years of being hunted by humans and displaced by other species — mainly goats, of all things — their numbers had dropped to just 15. In the hopes of restoring their population, scientists captured all 15 tortoises so they could be bred in a safe and controlled environment. And guess what? It's working.

Now, over 50 years later, the tortoises are being reintroduced to the place from which their ancestors came. There are currently about 1,0000 tortoises back on the island and prospering.

Although the fight to prevent the extinction of many species continues every day, every once in a while, some good news like this comes along, and we find out that an animal's threat for extinction has been changed from “endangered” to “threatened.” Perhaps it’s not the most reassuring category, but it does show that things are moving in the right direction when it comes to preserving certain endangered species.

Here are seven animals currently making a comeback from extinction.

Alaska’s humpback whale has been on the endangered species list for 40 years. But with numbers now around 22,000 (up from only 1,000 in the '90s), these animals are making a huge comeback. While that's great news, conservationists say they still fear that once they are officially removed from the list, they’ll once again fall prey to hunters.

The grizzly bear population in the United States dropped drastically with the expansion out West in the 19th and 20th centuries. By the 1970s, the low number of remaining grizzly bears had put them in the “threatened” category.

But now their numbers are on the rise (there are about 1800 of them) thanks to habitat conservation and protection, especially in Montana, Idaho, and Wyoming.

When I first became obsessed with pandas, it seemed like they were an animal most certainly doomed for extinction. And what with their habitat and primary food source being destroyed daily, it’s definitely still a precarious situation for the adorable species.

But, unlike some species that are disappearing off the face of the earth, the panda comeback has been remarkable. Though they're still on the endangered species list, scientists have become proficient in breeding the animal, and between education and conservation centers, Zhang Hemin, head of Wolong Nature Reserve Administration in China, says they think they can ensure the survival of the species for at least 100 years.

It was actually thought the southern white rhino was extinct until a pack of less than 100 of them were spotted in South Africa. Since then, through conservation efforts, there are now about 20,000 of them in protective areas and reserves, and they are now categorized as "nearly threatened."

Sadly, they are the only rhinos not on the endangered species list. There are only 10 northern white rhinos left on earth, all of which are in protective conservation facilities in California and the Czech Republic. They are actually considered extinct in the wild, and because they're worth so much to poachers they have armed guards at their side 24/7.

The peregrine falcon came close to extinction after DDT pesticides resulted in females producing brittle eggs. But now, thanks to DDT being banned and reintroduction efforts, the falcon population is on the rise, with about 300 falcon couples currently in the Midwest.

The black-footed ferret is another animal that was thought to be extinct. But over the last 30 years, thanks to combined efforts between the government, conservationists, Native American tribes, and private landowners, their population has jumped to 1,000 in North America. They may still be on the endangered species list, but they’re at least moving in the right direction.

The near extinction of Przewalski's horse is due to humans breeding the wild breed with domesticated horses. Up until recently, the last time Przewalski's horse was seen in the wild was in Gobi Desert of Mongolia in 1969. But reintroduction programs and efforts are hoping to change that: Since the 1970s, the population of the horses has grown from a mere captive 12 to over 400 in the wild, with an additional 1500 in captivity.