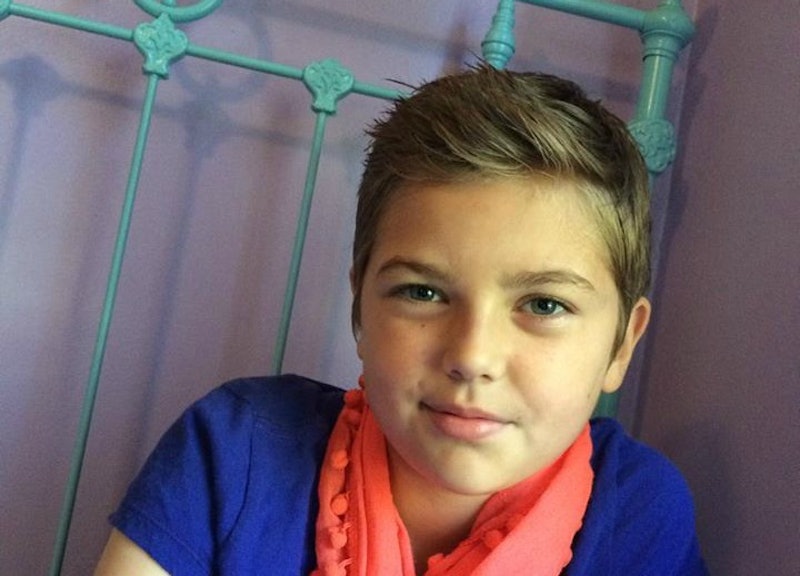 You know what’s awesome? 10-year-old Jetta Fosberg of Dayton, OH chopped off her long locks a few weeks ago and donated it all to charity. You know what’s less awesome? The fact that when she returned to school with her hair cut short, other kids started to bully her. It’s things like this that really make me wonder what is wrong with the world, because seriously. On what planet does it make sense to mock a genuinely charitable impulse? People are the worst.

Here’s the deal, as reported by WHIO: Jetta, who attends Pathway School of Discovery, recently donated 14 inches of hair to the charity Wigs for Kids. According to the New York Times, Wigs for Kids is the oldest hair donation charity around; the wigs made from donations go to children with cancer, alopecia, and other medical conditions resulting in hair loss. Jetta is obviously not the only kid who’s ever donated her hair — but no matter how many kids (and adults) have done it, it’s still a terrific thing to do. And then this happened: After Jetta's initial donation, she decided that she actually wanted her hair even shorter and got it cut accordingly. Now she’s rocking a pixie cut — but also enduring a lot of bullying by kids who seem to think making fun of people is cool. Her mother Heidi did what any concerned parent would do and went to talk the school’s principal about the bullying. The response, though? Wasn’t exactly the sort of thing you’d hope for from a supportive educator. Said Heidi, “[He] told me that he didn’t know of any child that had ever died from words, and that we needed to toughen up and deal with it.” The principal also apparently said that “he would deal with it how he saw appropriate.”

I’m unclear from just the WHIO report about exactly what the principal’s statement meant and whether or not he’d actually taken action; however, the elder Fosberg also spoke to Yahoo!, providing a more detailed picture of the situation. “The male students especially would not let it go,” she said. “When some boys [started] digging into Jetta in the middle of art class, the teacher told her to ignore their comments, without saying anything to the boys.” It got bad enough that Heidi pulled Jetta out of school and went to the head of school. “The principal, Keith Colbert, sent me an incident report form and said there would be consequences for the boys, including written apologies to Jetta,” she continued. “But when I brought her back to school on Monday it was like nothing had ever happened. The boys continued teasing her, saying their parents didn’t really care and that the school hadn’t followed through on any punishment.”

Heidi knows that as far as bullying goes, Jetta’s has been relatively mild — but she’s right when she says that the severity doesn’t matter; all bullying is worth stopping. “Some kids go through this, far more severe, far longer than Jetta has endured,” she said, “but it shouldn’t matter. We just want them to realize that this isn’t just kids being kids and kids shouldn’t get to say things like this.” Ayyyyyy-men.

I’m always amazed that by this point, schools aren’t more aware or willing to take more active measures against bullying. According to the U.S. Department of Health and Human Services’ “Stop Bullying” website, more than 25 percent of students between the ages of 12 and 18 are bullied at school — so if you know four kids, odds are at least one of them has been the victim of bullying. As Take Part points out, an estimated 160,000 kids miss school daily because they’re afraid they’ll be verbally or physically harassed if they go. A school’s job is to educate, and part of fulfilling that role is to create an environment conducive for learning. Bullying so severe that it prevents children from attending class? I would argue that its presence demonstrates a failure on the school’s part to create a conducive learning environment.

And as for the claim that no child has ever died from words? Not true. We only have to look at our own recent history for proof of that. Whether it’s cyberbullying, as in the case of Megan Meier, or schoolyard bullying, as occurred to Phoebe Prince, words can take a fatal toll on children. Words can actively harm anyone, and instead of telling people they should just learn to “deal with” bullying, we should be teaching people not to bully in the first place.

Thankfully, Jetta has an incredible support system behind her; Heidi started a Facebook page, Stand with Jetta, as well as launched a t-shirt campaign benefiting both Wigs for Kids and an anti-bullying charity. Furthermore, an update from WHIO noted that National Heritage Academics, which manages Pathway School of Discovery, has launched an investigation following the filing of a parental complaint. NHA’s statement also read that school officials are working on their “value of the month” — respect — by discussing “appropriate behaviors towards other students.” Let’s hope it turns into a teaching moment, both for the students and for the school — and in the meantime? Jetta, you’re fabulous, both inside and out. Rock on.