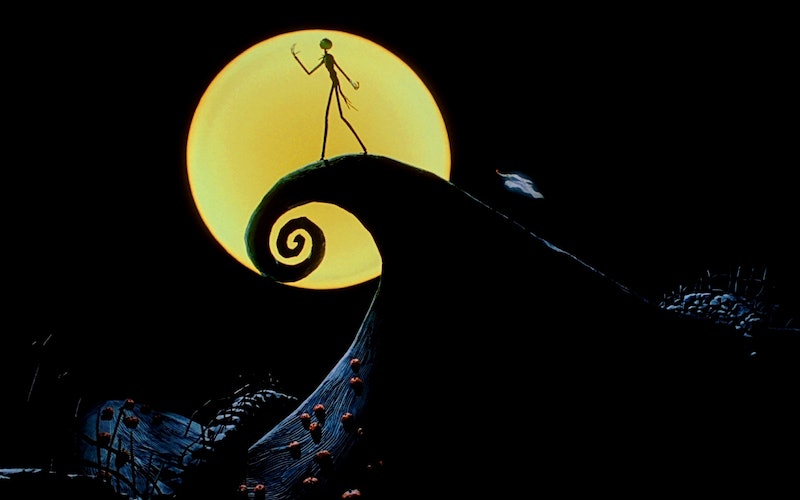 If you were a proud VHS owner of The Nightmare Before Christmas, like I was as a child, it's okay to acknowledge that Tim Burton simultaneously ruined your innocence and inspired your inner emotionally adept intellectual at the same time. Your silly, naive parents thought they were exposing you to a light-hearted Halloween movie, in their defense, it is animated, but what they were actually doing was delivering you your first premature existential crisis. Thanks, mom, dad and Tim! You guys are really, truly always a great time.

If you’re being completely honest though, you loved the damn thing. You were addicted (and probably still are) to the haunting score, the weird, creepy whimsy of it all. It was a guilty pleasure that allowed us to bask in that deeper, moodier, lyrically obsessed part of ourselves that we didn't know existed or that we were allowed to have while watching all those saccharine, filtered Disney Channel shows. I mean, it basically prepared us for that long side-banged, heavily applied black eyeliner stage of our lives. In fact, it may have been THE catalyst to all of our angsty despair during our teens. It got us in touch with our Emo side by exposing us to the dark side in a variety of different ways.

IT SPARKED AN AFFINITY FOR DARK, DRAB COLORS

AND YOUR PREOCCUPATION WITH ALL THINGS HALLOWEEN-Y

IT GAVE YOU A SENSE OF GENERAL DISTRUST TOWARDS AUTHORITY FIGURES

A politician with two faces? I see what you did there Burton, and I like it.

As perpetuated by Blink-182, the patron saints of 90's feels.

AND THE FEELING THAT "NO ONE UNDERSTANDS YOU"

And you don't understand anyone else. *Insert The Used lyrics here*

...AND THAT NOTHING EVER GOES YOUR WAY

Like, when did Bobby took Hannah to homecoming when you were been IMing each other for WEEKS.

IT UNDERSTOOD YOUR INCLINATION TOWARDS THE INDOORS

Why would you go outside? There's no computers there...

...AND YOUR CONFUSION AT OUTWARD AFFECTION

Expressing feelings? What is this an interrogation?!

YOUR SENSITIVITY TO LIGHT, EXPLAINED

It was dark there inside your cave.

A CAUSE FOR FEAR OF SMALL CHILDREN

A bunch of sniveling, giggling deviants.

IT EXPRESSED THE DIFFICULTY OF SMILING IN PICTURES

You perfected the pout and the general look of aloofness, though.

AND WHAT IT's LIKE TO HAVE A FLAIR FOR THE DRAMATICS

Which prompted you to post an obscene amount of "poetic" song lyrics on your AIM away message.

BUT MOST IMPORTANTLY, IT INFLUENCED YOUR IRONIC SENSE OF HUMOR