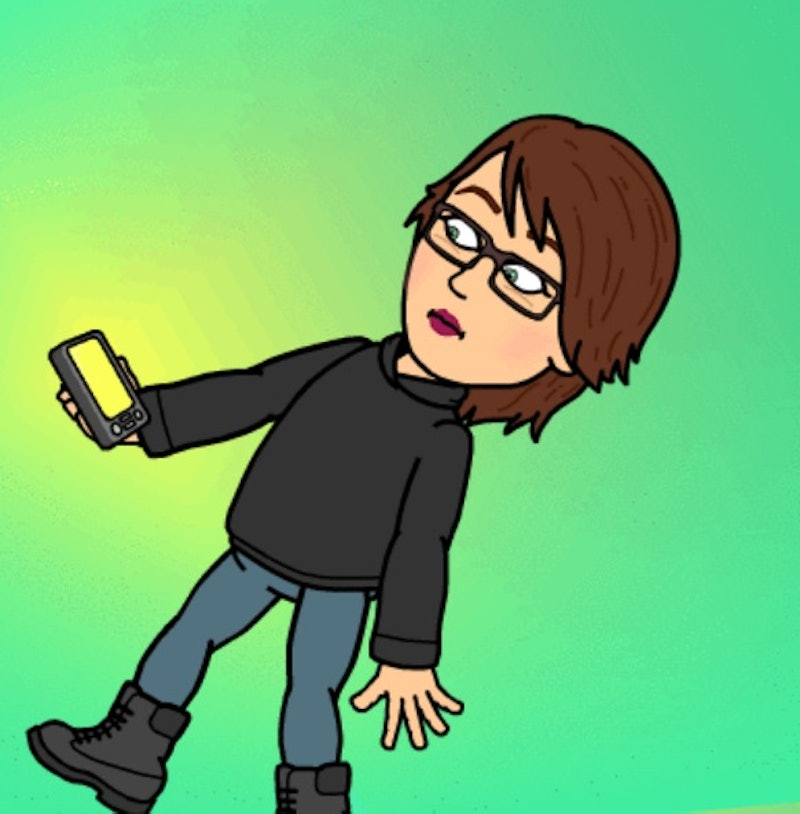 It’s been a while since we’ve seen anything notable in the world of emojis, so it’s about time for something new to pop up, wouldn’t you think? Well, it looks like we’re in luck: Bitmoji is here, and it wants to help you make your own emojis starring — yourself! Obviously I couldn’t let this one go without trying it out (I’m a sucker for free apps), so here’s the lowdown on the iOS version. But don’t worry, Android users — it’s available on the Google Play store, too.

The newest creation from the masterminds behind create-your-own-comic-strip app Bitstrips, Bitmoji allows you to take a little cartoon version of yourself and make your own set of personalized emojis. Unlike another DIY emoji app we’ve looked at in the past, Makemoji, you don’t make your own Bitmojis totally from scratch; rather, you create an avatar of yourself, which the app then inserts into a collection of existing emojis. Some of them feature words (are we still using “woot?” Because it’s an option here) with your avatar springing forth from them like a tiny messenger of enthusiasm; others use your avatar’s face to depict certain emotions; and a bunch of them actually put your avatar into the middle of a series of admittedly bizarre scenarios. Why is my Mini Me reclining suggestively on a giant, steaming hot pizza? No idea. But hey, I suppose stranger things have happened. Sexy pizza is a thing now, so whatever.

The images created by Bitmoji look more like stickers than anything else; they can, however, easily be pasted into everything from iMessage to Facebook, and the iOS version even comes with a built-in keyboard. If you've got Bitstrips, downloading the app and logging into Facebook will allow you to retrieve your existing avatar — but no worries if you don't already use it. The very first thing I did upon booting up the app as Bit-newbie was create my little miniature self, and it’s just as fun as you think it is.

For all my coverage of the emoji phenomenon, I don’t actually use them that often; my repertoire is pretty much limited to smiley faces to indicate good-natured joking and frown-y faces to depict comical displeasure. Accordingly, rather than simply giving a general demonstration of the app, I decided to put Bitmoji to a different kind of use: I built a story using it, starring my avatar self. Since it’s Halloween, naturally it’s a Halloween horror story, so here — submitted for the approval of the Bitmoji Society, I call this story…

The Tale of the Phantom iPhone

It was Halloween night, and to be honest, I wasn’t actually looking forward to it all that much. Not that I was actively dreading it; I just didn’t particularly feel like dealing with crowds of costumed partiers. True, I could have gone:

Scare people silly; but really, all I wanted to do was:

That is, sit at home in my giant pumpkin-shaped pillow fort and watch horror movies on Netflix. (What? Pillow forts are the best!)

I got a text from my BFF, Jill. I couldn’t make much sense of it; it seemed to be just a random string of letters and numbers. “Jill?” I thought.

“You pick the worst times to text. We’re going to have to have a talk about that at some point.” I almost decided just to ignore it… but then a second text came through. It read simply, “NEED HELP COME QUICK.” Somewhat alarmed, I texted back, “Where r u?”; within seconds, she texted an address to me. I replied:

And I was off.

The address wasn’t one I was familiar with, and it a looked a little… shall we say, off when I arrived. The apartment building — at least, that’s what I assume it was (had Jill moved and just kind of forgotten to tell me?) — looked almost abandoned: Dark, creepy, and generally just sort of:

My phone buzzed again; it was Jill. “COME UP 13TH FL,” it read. I felt kind of uneasy… but what if something was really wrong? Falling right into the trap of every horror movie victim in the history of the universe (why did I not just call 911?!), I went in.

The elevator was broken, so I had to huff it up 12 flights of stairs to get to the 13 floor — and of course, when I arrived, the door slammed shut behind me and locked. So much for fire safety.

I reached for my phone yet again; this time it read “LAST DOOR ON LEFT.” I have no idea how Jill was keeping such a close eye on me; maybe they had better security here than I thought. I made my way down the long, dark, and eerily silent hall, finally arriving at a decrepit-looking door. I turned the knob, pulled it open, and found myself face to face with…

What? Where was Jill? Nowhere to be seen, apparently. For a moment, I felt like:

And then I realized that the Other Me looked a little… evil. Demonic, you might say. It was right about when “I” starting reaching toward myself with grasping little hands that I decided now might be a good time to:

I ran, fling open as many doors as I could, looking for a way out, only to find an increasingly weird selection of Other Me’s behind them. One:

Was asphyxiating to death in a noxious cloud; another:

Was apparently on the rampage; and, perhaps freakiest of all, one:

Was being devoured by spiders.

At last, though, I ran out of doors. I had nowhere else to go — and as I turned around, the demonic Other Me closed in. She drew close… she reached out… she grabbed at something deep inside my chest… and...

And that’s the story of how I got my heart stolen by a demon on Halloween. Literally.

Grab Bitmoji on the App Store for Apple devices or on the Google Play store for Android ones. Happy Halloween!