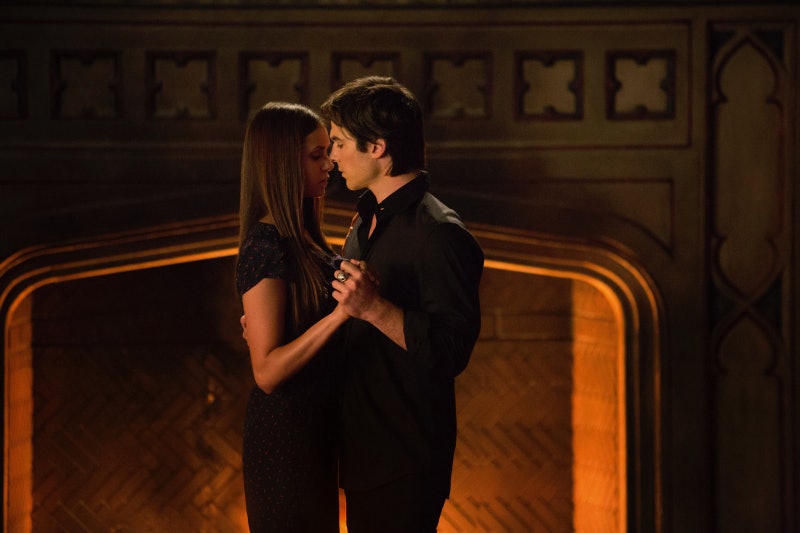 As the saying goes, "you don't know what you got 'til it's gone," and that's exactly how I feel about Delena now that Damon is hanging around in a 1994 version of purgatory. I've shipped Elena and Damon for as long as I can remember, and I've witnessed the couple's many ups and downs — inevitable with a couple as passionate as Damon and Elena. But Season 6 has truly ripped out my heart with this latest plot development: Just as Damon found a potential way back to Elena, Elena makes a choice that erases her entire romantic history with the elder Salvatore brother. (Julie Plec, why must you ruin all of my happiness?!)

It makes sense for Elena to make the choice to leave all memories of Damon in the past. The vampire made some dangerous choices in an attempt to keep Damon "with her," like taking a ton of psychedelic herbs in order to hallucinate her dead beau, which also happened to make her crave human blood like a pregnant woman craves pickles and ice cream. (Obviously, not good.) Now that Elena's memories of her relationship with Damon are gone, she can "move on" — even though she now knows that there is a large chunk of memories about Damon that she is missing and would make her mourn her dead boyfriend. But now, here's the big question: What if Damon comes back? Will Elena ask for her memories... or put Damon in her past?

There's a good chance that Elena might not. Think about it: The only thing that Elena knows about Damon (other than what her friends and family have told her) is that Damon was a not-super-great guy. And Damon isn't a super great guy. He murders people when he's sad, pined relentlessly after his brother's girl, and turns off his humanity when life gets too hard. There are plenty of reasons for Elena to say "later" to Damon forever — but I really, really hope that she won't.

Right now, Elena is playing it safe by leaving her memories of Damon in the past, but what she doesn't realize is that loving Damon was never the safe choice — and that's what excited her the most about him. Damon makes Elena feel like anything is possible, and that she can do anything. He allows her to embrace the darkest parts of herself, which is an unfortunate but very real necessity of living a vampire's life. Truth be told, Damon makes Elena just a little bit more exciting — and I think we can all agree that she's way more fun when she's with Damon than when she's drinking alone in the woods or writing in her diary.

It will be hard for people to convince Elena to take back her romantic memories of Damon if he returns to the land of the living, but for the sake of her own ultimate happiness, I really, really hope she does it.