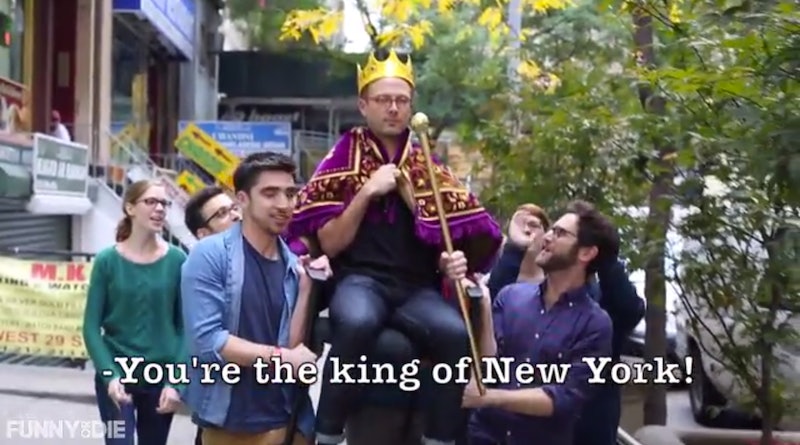 I wonder exactly how many fans Michael Che lost on Wednesday. In case you hadn't heard, actress Shoshana Roberts appeared in 10 Hours of Walking in NYC as a Woman, a street harassment awareness video that went viral and really served to show the kind of horrifying, disgusting, and downright annoying comments that every woman has to deal with just for doing something as nondescript as walking. Despite the fact that, as Jessica Williams of The Daily Show tried to teach, our walk to work is not for anyone to comment on, unfortunately the reality is quite different for women. Naturally, the video has kicked up a lot of controversy and even some jokes, but none were as well handled as Funny or Die's 10 Hours of Walking in NYC as a Man parody.

Listen, we all understand that a lot of comedy is situational. We all understand that humor is a way to deal with difficult issues, even if most people feel like those issues aren't inherently funny. However, when comedian Michael Che joked about catcalling on Instagram, "apologizing" for the number of women who had felt harassed by him saying hello to them and mockingly stating that he can't imagine what that kind of attention must be like, his stunning level of ignorance was offensive to pretty much every woman everywhere. His subsequent posts didn't make the situation any better and, overall, I definitely have a lower opinion of Che than I did prior to this incident.

However, this Funny or Die spoof shows you exactly how to joke about a situation like this. Instead of mocking women for daring to complain about the "innocent" statements from men that they never asked for — and thus missing the point that they are UNWANTED and thus HARASSMENT — Funny or Die did a genderflip. They showed a white man walking around New York for ten hours, becoming subject to such "harassment" as being given a free Chipotle lunch, being high-fived by the same man for five minutes, and being named King of New York. Not to mention the woman who handed him a bottle of sunscreen so he could keep his skin "nice and white".

But the real kicker was the PSA attached to the end of the video, which referred to all of these hilariously positive interactions as "verbal street privilege" and finished with the words "if you want to help, leave the patriarchy in peace". It was the perfect compliment to the video Roberts appeared in, because it showed that while women are given all sorts of commentary about their appearance and clothes, commentary that makes Roberts more and more visibly uncomfortable as the original video goes on, the worst thing men have to deal with is being high-fived too much. Or, to put a less overdramatic spin on it, men walking down in the city have street privilege while women are subjected to street harassment. The privilege is in the fact that majority of men will never have to deal with even close to what most women have to deal with just for walking.

The fact that Funny or Die decided to use the phrase "street privilege" to describe a white male walking down the street, that they decided to use over-the-top humor to show that the patriarchy works to the benefit of men as a parody of a video showing how that same patriarchy works to the detriment of women, is the right way to find the humor in this situation. It's thoughtful and poignant humor, the kind that makes you think without undermining the original and very real point. I hope Che is taking notes.