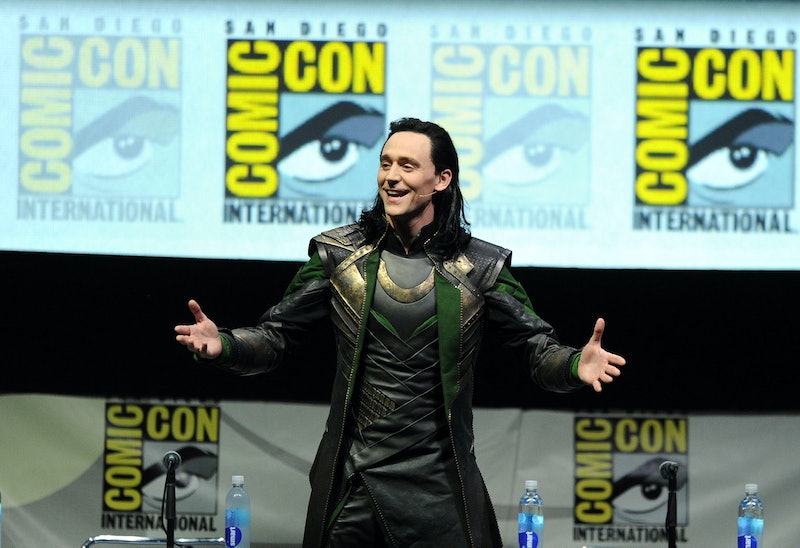 Thank goodness for this news because after the revelation that Loki wouldn't be in The Avengers: Age of Ultron, I started to get a little worried. However, Marvel Cinematic Universe fans can rest easy today because Tom Hiddleston is returning for Thor 3 . In fact, Hiddleston fans can rest easy tonight because our odds seem good that he'll also be in The Avengers 3 — Part 1 and Part 2 as well. Basically, we are getting all the Hiddleston all the time and that's such a massive relief. The Avengers films might cycle through a lot of villains, both in the main ensemble film and in each hero's individual film series, but it just wouldn't be the same without Loki.

That could be my shameless love of Hiddleston talking, but I really don't think it is. Can you imagine what The Avengers would have been like without Loki? Can you imagine what Thor would have been like without Loki? If you take Loki out of the MCU, the whole universe just starts to fall apart. It's like having a peanut butter and jelly sandwich without the jelly. Sure, it's still a sandwich, but is it anywhere near as good? I don't think so. In appreciation of Hiddleston and Loki, here's a look back on what we'd have ended up watching without his glorious presence.

Thor starts out the film as a violent, impulsive man child who likes to fight more than he likes to do anything that might even be vaguely construed as preparing to rule Asgard. That's it. That's the whole movie. There is no character development. What character development? Also, we'd have none of this royal side-eye going on in the background and that would just be an absolute shame.

There are two options here. Either the Avengers never become a team because Loki never makes it down to earth to cause all this trouble to begin with — denying us such great scenes as Thor landing on the Avengers' plane and the Hulk smashing the ground with Loki's face — or the Chitauri try to take over the earth without his help and they don't get that handy scepter that shuts the invasion down. The earth falls to aliens, all hope is lost, and all because Loki wasn't there to beat up.

They may as well have just called this film Loki: The Dark World. As far as I'm concerned, everything Loki had done in the Marvel movies prior to this were the catalyst for this entire plot. No Loki, no Thor, no The Avengers, no Thor 2.

The Avengers might still be a team even without Loki's constant interference in the MCU, but these movies are just plain not the same without that character. Of course, my shameless love of Hiddleston makes it hard for me to even believe that Ultron is really going to top him as a villain come 2015, but that won't stop me from spending my money on that Loki-less movie anyway.