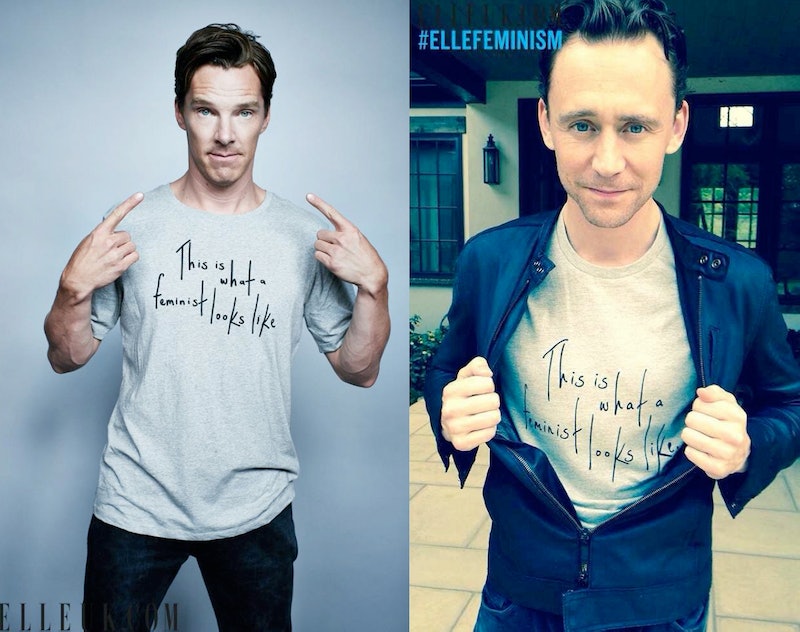 The tides are finally changing and more and more men are stepping into the feminism conversation. Now Elle magazine's has launched #ElleFeminism with Benedict Cumberbatch and Tom Hiddleston among others to support gender equality. The two British heartthrobs recently donned "this is what a feminist looks like" t-shirts for Elle's December issue centered around empowering women. The idea is that anyone can and should be a feminist regardless of gender. After all, feminism is simply agreeing that men and women should have equal rights.

It's not surprising that the pair readily agreed to be literally labeled as feminists. Over the years Hiddleston and Cumberbatch have said their share of feminist quotes, and joined in on campaigns for equal rights like Emma Watson #HeForShe campaign.

Plus, both actors grew up with strong female role models. Hiddleston has two sisters and a mother all of whom were independent go-getters. Cumberbatch also has a sister and his mother is Wanda Ventham who was a pretty successful actress in her own right back in the 70s and 80s. Having a positive female presence in their lives certainly helped make them more attuned to the injustices women suffer and clued them in to how equal rights is kind of an obvious thing: so of course they're feminists.

And here's what a feminist sounds like. (Or at least what Hiddleston and Cumberbatch's take on gender equality sounds like.)

Elle asked Cumberbatch to play word association and name the first thing that came into his head when he heard the word "equality." I couldn't agree more with his answer of, "Now."

“IT’S FLATTERING, THOUGH I WORRY ABOUT WHAT IT SAYS FOR FEMINISM. IT’S QUITE A PEJORATIVE TERM… CUMBERBABES MIGHT BE BETTER.”

How sweet of him to care what his fanbase is called, and want them to be more than just "cumberbitches."

“IT'S NOT EVEN POLITENESS. I WON'T ALLOW YOU TO BE MY BITCHES. I THINK IT SETS FEMINISM BACK SO MANY NOTCHES. YOU ARE... CUMBERPEOPLE.”

Here he addresses "cumberbitches" again, but I like how now he's including people of all genders. So instead of just his "babes," they're "people." He'll also accept "Cumbercollective."

"SHE HAS [AN] INDEPENDENCE. SHE MAY BE QUIET ... BUT SHE'S A STRONG WOMAN AT THE SAME TIME. JUST BECAUSE SHE'S FALLEN FOR A COUPLE OF SOCIOPATHS DOESN'T MEAN WE SHOULD NECESSARILY RULE HER OUT AS A SANE AND COURAGEOUS STRONG WOMAN."

Cumberbatch is a huge fan of Sherlock 's Molly Hooper and her immeasurable strength. Plus, I love that he points out she is more than their choice in boyfriends. He doesn't label her dumb for picking a poor partner. He knows even smart women can find themselves in unhealthy relationships, but that doesn't diminish their character.

"@EMWATSON YOU ARE IMPECCABLE & EXTRAORDINARY. I STAND WITH YOU. I BELIEVE IN GENDER EQUALITY. #HEFORSHE"

Hiddleston was one of the first to publicly join Emma Watson's feminism campaign.

"I BELIEVE IN THE STRENGTH AND INTELLIGENCE AND SENSITIVITY OF WOMEN. MY MOTHER, MY SISTERS [THEY] ARE STRONG. MY MUM IS A STRONG WOMAN AND I LOVE HER FOR IT."

There's something wonderful about men who appreciate strong women.

"JANE FOSTER IS A REALLY STRONG WOMAN AND I DON'T THINK SHE'S PARTICULARLY FAZED BY ASGARD. WHAT I LOVE ABOUT THE WAY NATALIE [PORTMAN] PLAYS HER IS SHE'S VERY CURIOUS AND VERY SELF-WILLED."

Tom Hiddleston is a Natalie Portman fangirl, as he should be. Her Thor and Thor 2 character Jane Foster was every bit as strong as Hiddleston says. She even had the courage to punch Loki.

"I SAID SHE SHOULD GO FOR IT. I THINK EVERYONE SHOULD PURSUE THEIR DREAMS."

Hiddleston gave the above awesome answer to this Metro reporter's rather dumb question: "Your younger sister is an actress. When she said she wanted to act did you feel she was encroaching on your territory?" News flash: women in film are not replacing men or stealing their territory. They just want some equal representation.

"I WORRY THAT SOMETIMES THE BUSINESS DOESN’T SEE HER INTELLIGENCE AND WISDOM. WE WORK IN A BUSINESS THAT’S OFTEN PREDICATED ON HOW YOU LOOK. SHE’S SO GROUNDED, I’M SURE SHE’LL BE FINE."

From the same Metro interview, this is how men should support women. We need more, I worry that people don't see her for more than her looks, but she's strong so she'll be able to handle herself—and less men rescuing damsels in distress.

"I THINK EVERYONE'S VOICE IS WORTH HEARING. SO IF YOU'VE GOT SOMETHING TO SAY, SAY IT FROM THE ROOFTOPS."

#Equality at its finest. Hopefully more people will follow in Cumberbatch and Hiddleston's footsteps because a feminist is something everyone can be.

More like this
The 'Hocus Pocus' Sequel Finally Has A Release Date & It Makes Total Sense
By Shannon Barbour and Radhika Menon
Adele’s All-Female Lineup Includes Kacey Musgraves, Mahalia, & Self Esteem
By Shahed Ezaydi
Jurnee Smollett’s Heart Is Healing
By Rebecca Carroll
Adele Says It Would Be “Wonderful” To Have Kids With Boyfriend Rich Paul
By Jake Viswanath
Get Even More From Bustle — Sign Up For The Newsletter