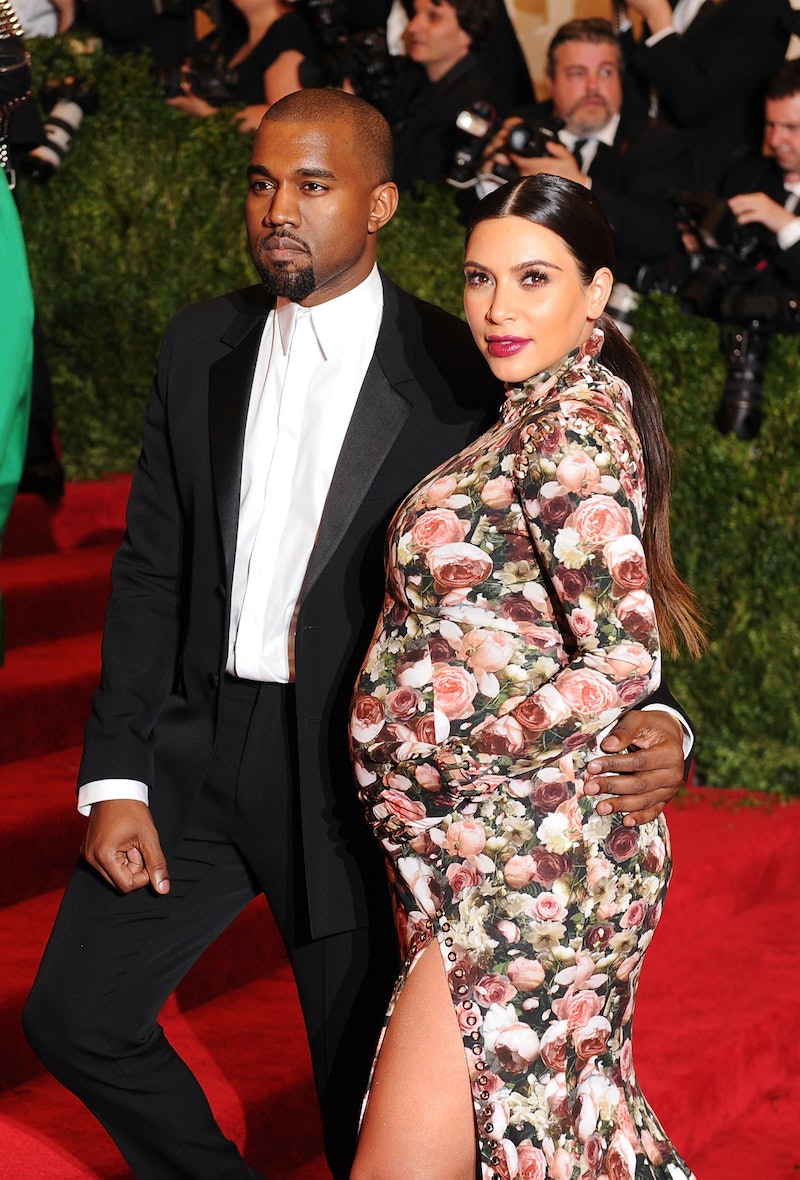 We have a big problem. We, as a society, cannot approach a celebrity pregnancy without first including the subject of weight gain and how it might affect a celebrity's career, sex appeal, and wardrobe. Kim Kardashian's pregnancy photo shoot has refueled the discussion of her baby-bod; Gwen Stefani's pregnancy rumors are being churned by a comfortable clothing choice that could just be that — a choice; and Jessica Simpson apparently isn't allowed to leave her house in shorts this close to giving birth. These sorts of conversations aren't healthy and they're promoting the unflinching issue of women determining self-worth by their weight and body shape.

For as long as they can keep it up, pregnant celebrities hide, unwilling to show their pregnant bodies to our prying eyes; and it's obvious why. Given the option to ogle a celeb who's with-child gives us a chance to see them in a seemingly imperfect light, and for some, it's a chance to pounce with with more ferocious negativity than we already do when they don an outfit we hate. And that reaction is absolutely inescapable if you're even slightly famous, especially if you were ever praised for your overwhelming attractiveness in your pre-baby life, like Kardashian and Simpson.

And there's absolutely no avoiding it. Since pop culture has devolved to the point of constant paparazzi surveillance, celebs are on display no matter what they do. If they put themselves on house arrest, a cameraman will find his way into the bushes, or the parking lot of their OB-GYN — a place no healthy pregnant woman can avoid. No famous woman can prevent being caught "guilty" of carrying a tiny, developing human in her womb.

The way we talk about pregnant celebs is an issue because not only is it completely insulting, but it devalues these women to being mere vessels for our amusement, and when that vessel changes in appearance, it's no longer providing the display we originally signed up for. When the former Daisy Duke-wearing, car-washing, Chicken-of-the-Sea-loving starlet Simpson's weight began to change, we, as a society, took notice, because we prized her for her "hot bod."

Headlines that accused Simpson of having "gross eating habits" and of binging on cupcakes emerged. Kardashian faced the same fate ("she couldn't stop eating!"), as did one-time pregnant celebs like Hilary Duff. Oh my word, a pregnant lady wants to eat cake? Please alert the media, because something is clearly wrong! Pregnancy has made [insert celebrity] stop obsessing about her waistline? Will we ever be able to ogle her figure in jealousy again?

The reverse of this is, of course, the focus on Kate Middleton's lack of weight gain throughout her pregnancy. This conversation, however, comes with a twinge of jealousy. Why isn't Kate gaining weight? Is she really even pregnant? When you're a pregnant celebrity, you cannot win, apparently.

This overreaction reduces these women to bodies, and nothing more. And while in the case of Kardashian, her body is a large part of her job as a spokesperson/model (if you've seen Keeping Up With The Kardashians this season, you know the reality TV portion clearly works no matter what her body looks like), it removes our perception of her as a person and a mother.

Women should always feel free to love their bodies as they are, but if there is a time in any woman's life when she should feel free from the arbitrary strictures of a socially-acceptable "sexy" body image, it's when she's preparing to give life to another human.

That's why, regardless of your artistic preference, Kardashian's newly-emerging pregnant photo shoot should be applauded. Simpson's choice to wear shorts in Los Angeles during a heat wave two months after giving birth should be of no consequence. Stefani's choice to wear a flowing shirt shouldn't signal that she's shamefully hiding a baby bump. If a woman can't gain weight in peace to support the growth of a child, when is she allowed to be what media deems imperfect?

The answer is "never, if you are famous."