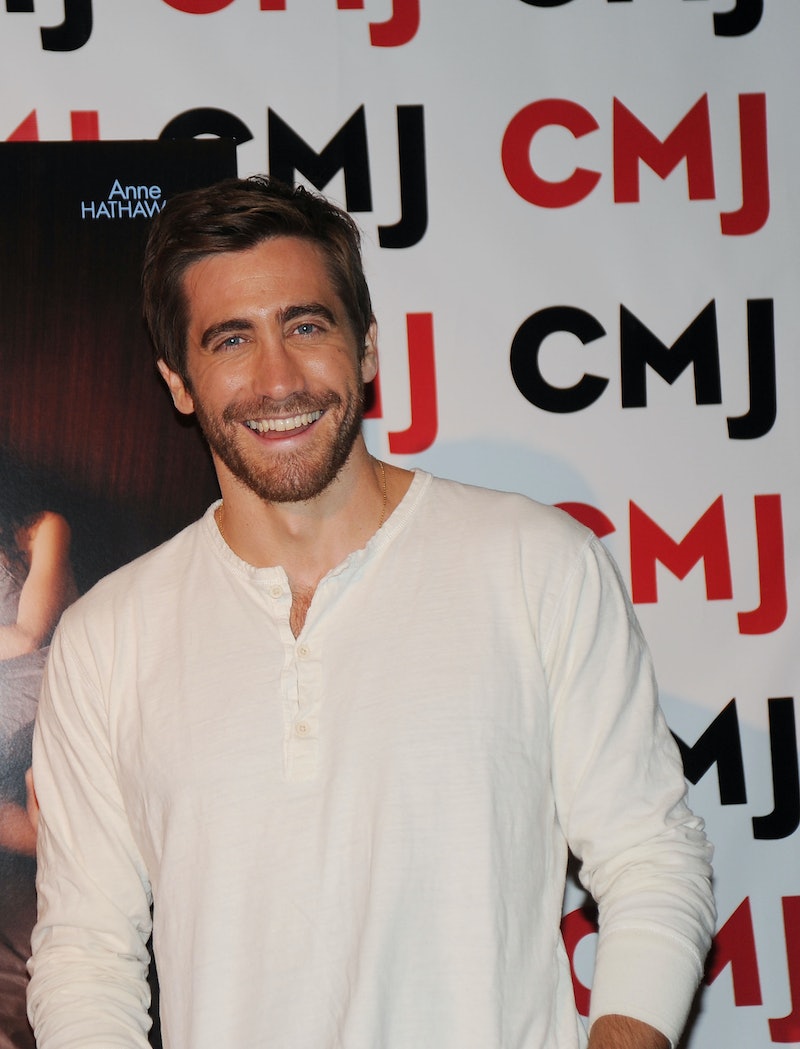 After Jake Gyllenhaal's Water War with Jimmy Fallon, you probably need a cold shower. It's OK — it's been a long hiatus without him in our lives, and now he's shaved his intense beard and is laying on the charm thick. After composing yourself from the happy reunion, take a walk down memory lane to all the other times that Gyllenhaal made you feel weak in the knees. Throughout nearly two decades in the industry, he's made men and women of all ages fall in love with him in his movies, but it's offscreen that he really shines. With his signature smirks, adorable laugh, and perfectly-timed jokes, it's rare to see an interview that doesn't make you fall over — either from swooning, laughing, or both.

I took the liberty of breaking into the YouTube archives to dig up some of my favorite Gyllenhaal moments. Want to see him cook with Ellen DeGeneres while chugging white wine? How about seeing him sing, give an amazing speech about Brokeback Mountain, or bro down with Hugh Jackman? All of those things have happened, and much, much more. You better sit down for this one, because even from on your screen, Gyllenhaal is going to knock you off your feet. It's obvious why Taylor Swift wrote a whole album about him.

Singing "The Fox" to Peter Travers

Long before "What Does the Fox Say?" Gyllenhaal sang a song from his childhood during an interview with Peter Travers. He can serenade me with a lullaby any day.

Singing "And I Am Telling You I'm Not Going" on SNL

He took singing to the next level during his monologue for SNL. In a wig and a sparkling gown, I was still totally attracted to him. Not only does he sing the powerful Jennifer Hudson track, but Amy Poehler, Kristen Wiig, and Maya Rudolf are his Dreamgirls.

So, Gyllenhaal is apparently an amazing home cook, and he showed his chops on The Ellen Show. While he fumbled around trying to get everything done in two and a half minutes, he was charming as hell, and even chugged some white wine like a pro toward the end. Perfect boyfriend material.

Goofing Around With Anne Hathaway

It's clear that when Gyllenhaal interacts with other people he likes, he's twice as charming. Case in point: this Cinemax interview with Anne Hathaway during the Love and Other Drugs days. Not only do they have incredible chemistry onscreen, but they crack each other up. This also has him revealing that he prefers dirty thoughts to Viagra, showing instead of telling someone he loves them, and that he loves bubble baths. Unfortunately, he's also a terrible texter.

When Gyllenhaal won the BAFTA for Brokeback Mountain, he was clearly super nervous. He was out of breath on stage and tried to tell a joke (involving him saying "heeeeey") to lighten the mood. But then he gave a heartfelt thank you to everyone who made the movie happen, including a shout out to Heath Ledger, who was proudly grinning in the audience. R.I.P.

His Bromance With Hugh Jackman

Though Prisoners is an intense drama, offscreen, Hugh Jackman and Gyllenhaal were the best of friends. This clip of them reading quotes they said about each other is amazing. "He sings, he dances, he saves children," Gyllenhaal says of Jackman. Can they sing and dance together?

Gyllenhaal plays an intense tennis player in this silly music video. All of it is great, but my favorite part is when he rips off his pants. Is it too late for him to join Magic Mike XXL?

"You Don't Know Jake" Game With Kelly and Michael

This game was a little awkward for Gyllenhaal, but he had fun with it. In case you were wondering, he doesn't sleep in the buff, but he does love PDA and slow dancing. He also doesn't like fantasy football, so again, dream man.

More like this
Sophie Turner & Joe Jonas’ Fave Taylor Swift Album Is Full Of “Bangers”
By Sam Ramsden
Twitter Is At Odds Over Taylor Swift’s Possible ‘All Too Well’ Oscar Run
By Brad Witter
Taylor Swift & Her Mom Clap Back Against The “Shake It Off” Plagiarism Lawsuit
By Jake Viswanath
Lauv Is No Stranger To Taylor Swift, Drake, Ed Sheeran, & Fame
By Alyssa Lapid
Get Even More From Bustle — Sign Up For The Newsletter