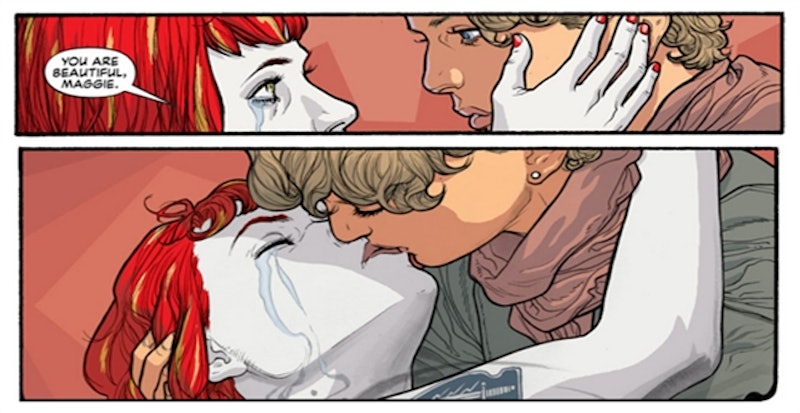 DC's Batwoman has proposed to her girlfriend—Gotham City police officer Maggie Sawyer—twice. Despite the engagement, however, DC Comics is refusing to allow the couple to tie the knot. And now J.H. Williams III and W. Haden Blackman—the creative team behind the comic—have decided they've had enough.

"[We] were told emphatically no marriage can result," Williams said on his Twitter in reference to the relationship between Kate Kane (Batwoman) and Sawyer. He did clarify that DC never presented it to them as "being anti-gay marriage," but the action on DC's part has raised a lot of eyebrows in that direction regardless.

Williams and Blackman cited editorial interference as their main reason for resignation, with this latest call for no marriage being the straw that broke the comic artists' backs. Their last Batwoman issue will be #26. Issue #27 and beyond will retain none of the creative team and—considering the monumental role Williams and Blackman had in developing the current incarnation of Batwoman—what will come next is completely unknown.

The pair say they are "heartbroken" over their exit, but seem secure in their decision, which they laid out in a statement posted to both their websites last night:

Unfortunately, in recent months, DC has asked us to alter or completely discard many long-standing storylines in ways that we feel compromise the character and the series. ... All of these editorial decisions came at the last minute, and always after a year or more of planning and plotting on our end.

We’ve always understood that, as much as we love the character, Batwoman ultimately belongs to DC. However, the eleventh-hour nature of these changes left us frustrated and angry—because they prevent us from telling the best stories we can.

DC Comics' refusal to publicize the engagement of its main couple has drawn attention in the past, most especially when played in contrast with DC's celebration of Alan Scott as a gay Green Lantern.

Blackman and Williams are noted among the comics community for having brought Batwoman to the forefront as one of DC's best, with Williams' art and panel experimentation being called "one of the most inventive" and "incredible."

Needless to say, many DC fans are already up in arms over DC's treatment of the issue, both in terms of the marriage itself and the creative team. Io9's Rob Bricken, for one, brought up a lot of valuable questions for DC itself:

Leaving aside why DC would piss off one of their best creative teams, I can't fathom why DC would think this was a good idea, or at least not realize what a horrendously bad idea it is...surely someone at the company realized that allowing the marriage to take place would be a lot less controversial than refusing to let the marriage take place...

And The Mary Sue's Susana Polo went into some of the context surrounding why it's such a big deal that DC isn't allowing Sawyer and Kane to marry:

An action doesn’t have to be intentionally insensitive to be insensitive, and I would argue that’s what has happened here. ...The point of heroes, narratively, is to break boundaries, so that we normal people will know where the boundaries are...For many years now, merely getting equal legal recognition for their relationships has been a boundary that the gay community has been fighting to break. Now imagine that I am saying this very slowly: If you are a person who has ever had your life touched by a fictional hero, you should be able to understand how very important it is to allow gay heroes to break that boundary.