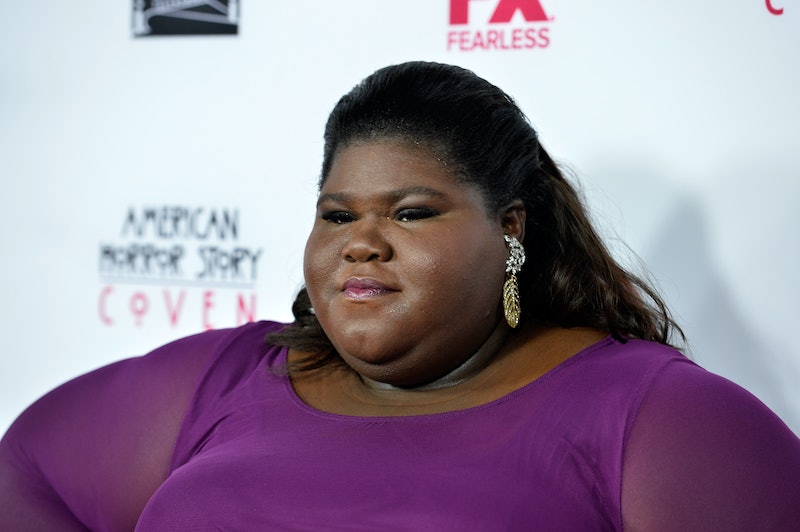 The new season of American Horror Story is filling out the freak show. The fourth installment of the FX anthology series is expanding its cast, and it includes some fan favorites from previous seasons. Gabourey Sidibe of AHS: Coven is heading to Freak Show in the upcoming weeks, and if her new character is anything like the one she portrayed on Coven, we're in for a fantastic arc. Aside from Fiona Goode, Queenie was hands-down the "baddest witch in town" on the spellbinding drama — so now the question is, who will Sidibe play on Freak Show ?

According to TVLine, fans shouldn't expect Sidibe to play Queenie 2.0 (as awesome as that would be, because Queenie was pretty much the best.) Forget working at a fried chicken stand for extra cash — per TVLine, Sidibe's character is a "well-off, impeccably tailored Barbizon graduate." But perhaps the biggest surprise to fans wasn't who Sidibe was playing, but whom her character shared a connection with. Sidibe's character — who's still nameless — is the daughter of Patti Labelle's Dora — aka the Mott's ill-fated housekeeper. According to TVLine, Sidibe's character returns home to deal with a "family matter" — and after Wednesday's episode "Edward Mordrake, Part II" we may be able to guess exactly what that "matter" is.

Dora was murdered by her employer's awful son, Dandy, in "Edward Mordrake, Part II" which seems to imply that Sidibe returns to Jupiter for something related to her mother's unfortunate death.

One option is that Sidibe returns for her mother's funeral, and sticks around Jupiter to learn exactly what happened to her on that fateful Halloween. Then again, there's a chance that Sidibe's character might not know her mother is dead at all — we don't know what Dandy did with Dora's body, and it doesn't seem like he was panicked enough to get caught with a dead maid in the dining room. Right now, it looks like Dora could be considered "missing" — at least until someone does a little digging into potential foul play.

My guess is that Sidibe's character comes home to investigate why her mother isn't returning her calls or letters — and learns that she may be the victim of a horrific serial killer. It's unclear as to how long Sidibe's arc on the new season is, but if she's as smart and savvy as the reports suggest her character to be, she might be the one who cracks the case and reveals Dandy as the nut job that he really is.

You know, if she doesn't get murdered by a psycho clown first.

More like this
The ‘Love, Victor’ Showrunner Gave Fans Hope For A Possible Spinoff
By Brad Witter
Legacies Showrunner Said There Is Still Hope For More Vampire Diaries
By Gretchen Smail
'Stranger Things' Fans Are Begging For Steve To Live For The Funniest Reasons
By Grace Wehniainen
Superman & Lois Season 3 Will Introduce A Complicated New Supervillain
By Brad Witter
Get Even More From Bustle — Sign Up For The Newsletter