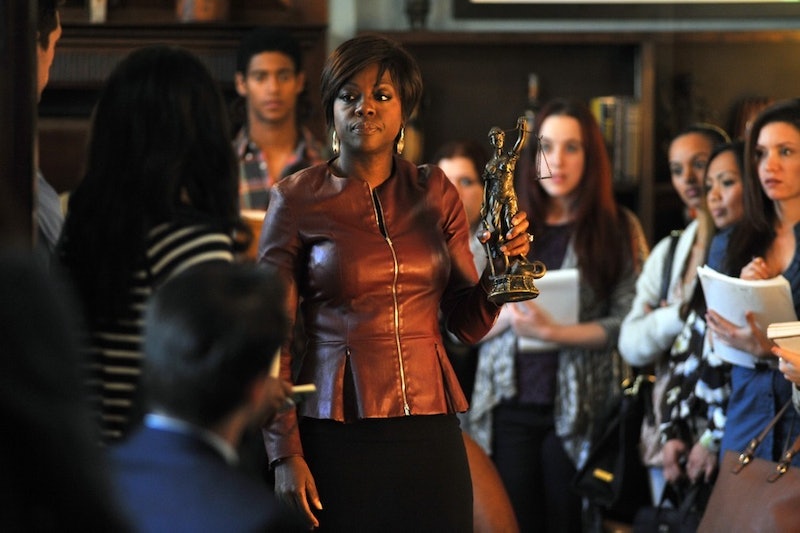 Is she or isn't she involved in her husband Sam Keating's murder? That is the HTGAWM question of the season, with respect to Annalise Keating. One week it looks like she is completely uninvolved, another week, she looks more guilty than anyone else. So which is it? Well, on Thursday's episode, we might have been given the definite answer — that Annalise is not involved in Sam's murder — but it could definitely change within the final two episodes. Let us not forget when Michaela said, "It's all her fault," while standing over Sam Keating's body in the woods with the other law students.

In the final moments of Thursday's episode, the audience was given a huge reveal regarding Annalise's involvement in Sam's death. Right after we learn that Asher and Bonnie are sleeping together (yes, that Asher, and yes, that Bonnie), Bonnie gets a phone call from Annalise, who is demanding to know if she is with "him." It turns out the "him" in question is not Asher, but Sam — so there is definitely some more to Bonnie and Sam TBA this season. When Bonnie says no, she wasn't with Sam, Annalise is visibly upset, and says she feels something very bad has happened. Girl, you don't even know the half of it.

So Annalise seems to be shocked that something bad has happened to Sam, right? Because that's what I thought, but then I couldn't help but feel like Annalise could also be creating some type of an alibi or something legal jargon to seem less guilty. Maybe I'm starting to read into this too much, but I really wouldn't put it past Annalise for being that sneaky to pretend to be shocked to find her husband missing, because she is that good.

We find out in the previews that within the next two episodes — by the winter finale — we will learn who killed Sam. At this point, I feel like I am no further in understanding who killed Sam as I was from before I even knew who Sam was when the show started. GAH, Shonda Rhimes! Why are you so good?