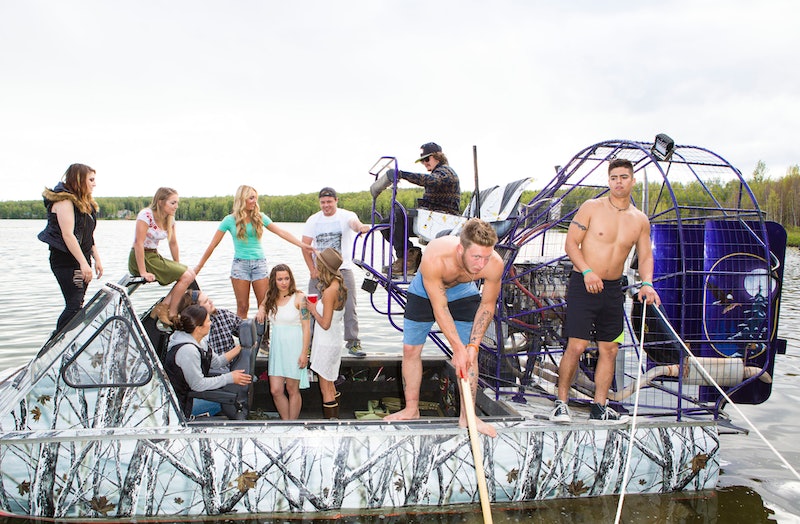 The series premiere of MTV reality show Slednecks begins with a young woman named Sierra throwing a young man named Kelly’s belongings out of the second story window of their housewrapped home. “Take your stupid f*cking sh*t” she yells as a waterfall of clothing pours from the window. Cut to: Kelly and Sierra looking at each other lovingly and telling the talking head camera that they’ve been a couple for years. It was that very moment that I knew I was in the right place. (Spoiler alert: 25 or so minutes later, we find out they split up after Jackie’s birthday party. 40 or so minutes later, Sierra obliterates Kelly’s shoes with explosives. I continued to believe I was in the right place.)

My two favorite moments from the 90-minute series premiere happened early on:

After a slurred proposition, a casual “we could do something,” a nonchalant “I’m sort of interested. OK, per se?”, and some incoherent gibberish, a guy named Zeke says the following to a gal named Hali:

I guess I would like to take you out on a date. Completely, strictly dinner date, maybe some wine, candlelit, whatever. I don’t know what your favorite food is. We’ll find out real quick.

AHHHHHHHHHHHHMAAAAAZIIIIIIIIIIIIIIING. “I don’t know what your favorite food is. We’ll find out real quick” reduced my body to a pile of smoldering ashes.

My body was not ready for what Zeke said next:

Completely straight up, I’m a f*cking wh*re, cool. Whatever. I like to have sex. Cool.

Zeke is one of the most self-aware people to ever be on a reality TV show.

After some more rambling and “OK, per se?”-ing, Zeke asks Hali out. Hali agrees to one date, no sex. Zeke accepts these conditions. (Later, he forgets about the date he'd planned with Hali. So, he invites her to visit him on the job. His new job. His new job as a go-go dancer. Hali enjoys the date but ultimately concludes they should just be friends.)

I sincerely believe Zeke is operating on another level. His romance transcends whatever crap we think is "romance." All of us could learn a thing or two from Zeke.

A bear snatched up a dumpster

A security camera catches the following: A bear inspects the contents of the dumpster, likes what he sees, and then DRAGS THE DUMPSTER AWAY. THE BEAR DRAGS THAT DUMPSTER AWAY LIKE IT'S A SMALL STYROFOAM COOLER.

This was my favorite effin' moment. MY. FAVORITE. EFFIN'. MOMENT. And no one can take it away from me. Not even a bear.

I've never seen anything like it. I will never forget that bear.