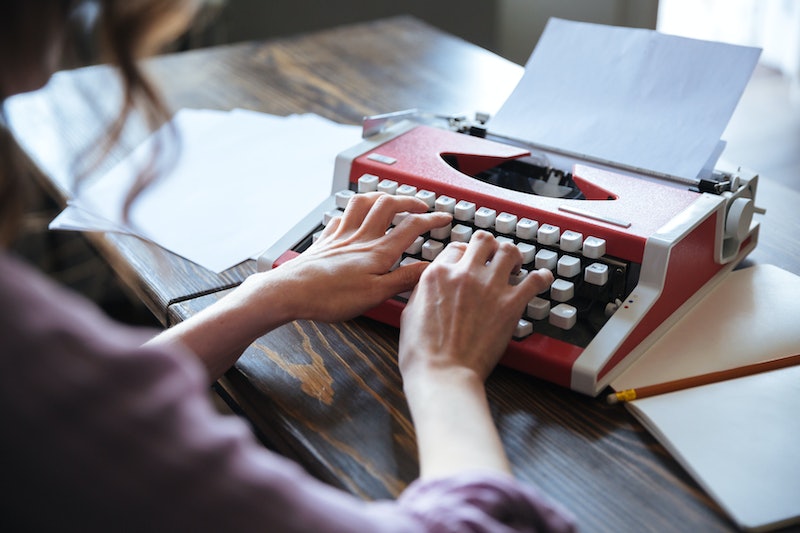 Happy November, y'all! For some people, it just means a flip of the calendar. But for writers, November is a big freakin' deal. It's NaNoWriMo, and it's on.

More than 400,000 people will participate in the great challenge that is National Novel Writing Month. Writing 50,000 words in 30 days is not for the faint of heart, so for many WriMos, the start of November is a cocktail made with equal parts excitement and wariness. In fact, taking on NaNoWriMo is a lot like how I’d imagine it feels to become a parent: You’re ecstatic about what you’re about to birth, yet there’s a part of you that’s terrified that you’re not really equipped to handle the job. At times you may feel like you’re doing something you were always meant to do, but at others you may start asking yourself things like, “What made me think I was ready for this?” and “What if I completely screw it up?”

Any way you slice it, 50,000 is a lot of words. Not everyone hits that monumental number — some “win” and some… well, some try. With my own NaNo record at 1-1, I say there’s no shame in not getting there, thankyouverymuch, but I’ll admit it feels better when you do.

For the best advice on what it takes to earn that coveted winners’ badge, I looked to the experts: a group of well-known WriMos whose projects went on to be published. They didn’t all “win,” but they’re all success stories with useful tips on what it takes to get ’er done:

Erin Morgenstern freely admits that she "cheated" by writing bestseller The Night Circus over the course of three NaNoWriMos (2005-2007). By-the-book WriMos can shake their fingers at her all they want for not starting a new project each November, but I’m not about to contest the six NaNo “wins” Morgenstern racked up between 2003 and 2009. In fact, considering that the finished project was The Night Circus, I’d say we as readers won, too. If you need proof, just look at the seven weeks the book spent on The New York Times Bestseller list. A film adaptation by Summit Entertainment is even in the works.

Morgenstern’s advice: Let yourself be surprised.

Can NaNoWriMo change your life? Apparently so. YA author Stephanie Perkins says she might never have completed a first draft if it weren’t for NaNo. The challenge of trying to hit 50,000 words in 30 days forced her to “spit one out, quick and dirty.” What she spat out wasn’t a mess at all. It was Anna and the French Kiss, the first book in a series that will make you feel all warm and fuzzy inside. It was such a success that Perkins has since been able to add two sequels to her bibliography, and she can even call herself a New York Times best-selling author now.

Perkins’s advice: Start your project without a lot of preconceived ideas and notions.

Sara Gruen wrapped up November around 10,000 words shy of the 50,000-word goal one year. Save your sympathy for someone who needs it, though. Not only did she go on to complete her project, it eventually sat on The New York Times Bestseller list for 12 weeks. Her book was none other than Water for Elephants, a novel that was later adapted into a film starring Reese Witherspoon and Robert Pattinson. See what I mean about sympathy?

Gruen’s advice: If you fall behind, skip to the fun scenes.

In November 2011, Hugh Howey crushed his NaNoWriMo goal by penning 60,000 of the eventual 180,000 words for WOOL, a book he went on to self-publish. The sci-fi novel caught fire, and Howey found himself in a position to turn down a seven figure offer to maintain his e-book rights. Somehow he’s making do with a mid-six figure book deal (poor guy) and an IndieReader’s Best Indie Book of 2012 honor. Oh, and let’s not forget that 20th Century Fox bought WOOL ’s film rights. If all goes according to plan, you’ll be catching it in theaters soon.

Howey’s advice: NaNoWriMo reinforces the importance of not taking a day off.

When a 2008 contest offered up a walk-on role in an episode of Star Trek to the Seattle-area writer who hit the highest word count by the end of November, Marissa Meyer got typing. That must have been all she did for the next month, because she ended up totaling 150,011 words. Yet somehow — even though she’d cranked out enough words to “win” NaNo three times over — a competitor outdid her and got to live out Meyer’s Trekkie fantasy. Still, I’d say that the three novels she produced (Cinder, Scarlet, and Cress) were a pretty damn good consolation prize.

Meyer’s advice: Keep your head in the clouds, your hands on the keyboard, and remember that Rome wasn’t built in a day.

After taking her husband’s advice to write what she loved, Carrie Ryan racked up 20,000 words during NaNoWriMo 2006. It wasn’t enough to “win”, but it was the boost she needed. She pressed on and eventually completed her project, which we now know as New York Times bestseller The Forest of Hands and Teeth. And it hasn’t stopped there. With the film rights optioned by Seven Star Pictures, odds are that we’ll be seeing Ryan’s post-apocalyptic world brought to life on the silver screen in the near future. Hopefully she remembered to thank her husband for his excellent — and even life-changing — wisdom.

For some, every day is like Christmas but for Shoshanna Evers, every day is like NaNoWriMo. The bestselling author writes 2,000 words daily. With that kind of dedication, none of us should be shocked that she’s been named one of Amazon’s Most Popular Authors in Romance and Most Popular Authors in Erotica. Naturally, Evers has also “won” NaNoWriMo, using one November to work on The Pulse.

Evers’ advice: Give yourself permission to suck.

It took Lydia Netzer multiple NaNoWriMos to write Shine Shine Shine because she couldn’t stop editing as she went. It took some serious discipline, but when she finally managed to wrestle her inner editor into submission, she got her book moving forward. And it paid off big time. Once finished, Shine Shine Shine earned recognition as a New York Times Notable Book for 2012 and was an Amazon Best Books of the Month selection.

For most fans of the TV show Firefly, its cancellation was a travesty. Jason M. Hough, on the other hand, took those lemons and made lemonade. Inspired by the show’s theme, the science fiction novelist started The Darwin Elevator in 2008 during his second NaNoWriMo. The book wasn’t published until 2013, but from there, Hough quickly churned out its two sequels. As horrifying as the trilogy’s post-apocalyptic world is, the reviews were not; The Darwin Elevator was well-received and claimed a spot on The New York Times Best Seller list. If I’d cancelled Firefly, I’d be waiting for my thank you card.

Hough’s advice: NaNoWriMo has no stakes except those you create.

If you ask Mary Robinette Kowal, she'll tell you that her first novel — which took her 10 years to write — sucks. Luckily, she didn’t let a little thing like that stop her. Kowal kept at it, and by 2008, she was definitely doing something right: She won the John W. Campbell Award for Best New Writer. Over the years she’s participated in NaNo multiple times because she finds that writing to a deadline works for her. It works so well that one of her NaNoWriMo projects, Shade of Milk and Honey, was nominated for the 2010 Nebula Award for Best Novel.

Kowal’s advice: Get that first draft down on the page and stop talking about writing it someday.

Feeling inspired by this list? There are tons of other notable NaNoWriMo authors like Rainbow Rowell, Delphine Dryden, Dave Anthony, Ada Vaughan, and more.

More like this
10 Equally Romantic & Heartbreaking Books From British & Irish Authors
By Shahed Ezaydi
Pamela Anderson Is Still A Hopeless Romantic
By Ilana Kaplan
Jessica Simpson On The Time She Was Pursued By A Backstreet Boy & An *NSYNC Member
By The Editors
We’ve Entered The Hot Boy Reader Era
By Samantha Leach
Get Even More From Bustle — Sign Up For The Newsletter
From hair trends to relationship advice, our daily newsletter has everything you need to sound like a person who’s on TikTok, even if you aren’t.