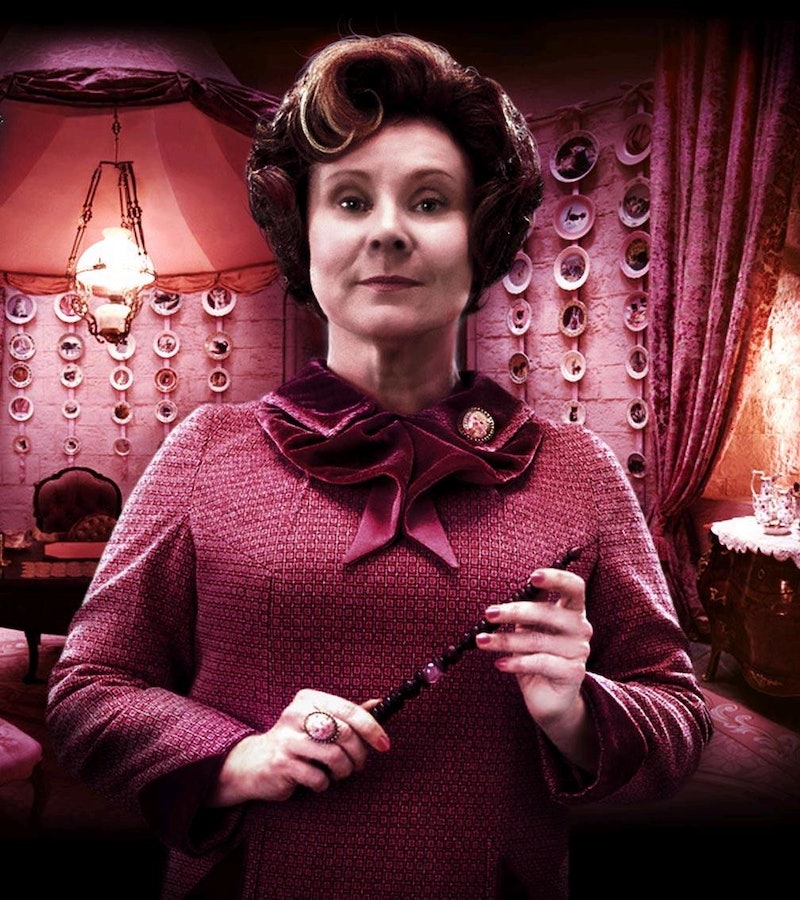 J.K. Rowling has a wicked treat for all Harry Potter fans (read: everybody) this Halloween. As promised, the beloved writer published a new Dolores Umbridge story on the Pottermore website, as well as five other stories to add to the Harry Potter canon. Just in time for the haunted holiday, Rowling delves into the never-before-seen backstory of the malicious professor, and just how she came to be one of the meanest teachers in Hogwarts history.

Though the Pottermore fan community is only open to registered members (which should be a hint for all Harry Potter-lovers to get over there and sign up), Today.com exclusively published the Umbridge story in its entirety in its books section on Friday.

Professor Sybill Trelawney, Thestrals, the Azkaban prison, the rest of the Ministers of Magic, and the Naming Seers each also got a new story on Pottermore.

So what do we already know about Professor Dolores Jane Umbridge? She first appeared in Harry Potter and the Order of the Phoenix as Harry, Ron, and Hermione's teacher. She's notorious in the Harry Potter universe for being the only person aside from Lord Voldemort himself to leave a permanent scar on Harry. During detention, she forced him to carve the words "I must not tell lies" on the back of his own hand. She's evil and backstabbing, but she has a bizarre fascination with all things twee and she hides behind an over-the-top saccharine manner.

But in the new Pottermore story, we learn so much more — not just about the character herself, but about Rowling's experience and influences writing the infamous professor.

Professor Umbridge Has A Family Secret

Her Muggle hate has to come from somewhere right? Well, Professor Umbridge was actually born from Orford Umbridge, a wizard, and Ellen Cracknell, a Muggle — gasp! She also has Squib brother. But Dolores resented this Muggle side of her family, and when they eventually split up and her mother and brother disappeared in to the Muggle world, she never spoke of them again.

But her father didn't get away from this hate just because he was a wizard. She hated his lack of ambition, and denied any relation to him when anyone asked about him.

All of you language nerds out there could have picked up this one already, but Rowling described the thought she put into creating a name for someone whom she called "a nasty piece of work":

Umbridge's names were carefully chosen. 'Dolores' means sorrow, something she undoubtedly inflicts on all around her. 'Umbridge' is a play on 'umbrage' from the British expression 'to take umbrage', meaning offence. Dolores is offended by any challenge to her limited world-view; I felt her surname conveyed the pettiness and rigidity of her character. It is harder to explain 'Jane'; it simply felt rather smug and neat between her other two names.

I'm now obsessed with the idea that Jane is a smug name.

She Has A Little Trouble Holding Her Sweet Sherry

This is perhaps my favorite little detail Rowling inserts into the new Umbridge story. While her coworkers at the Ministry of Magic found her tolerable in general, like many people hiding behind a facade, once she had a little bit to drink, she became completely horrific:

After a glass of sweet sherry, Dolores was always prone to spout very uncharitable views, and even those who were anti-Muggle found themselves shocked by some of Dolores's suggestions, behind closed doors, of the treatment that the non-magical community deserved.

Professor Umbridge Has Never Been Married

I mean... no surprises here.

She's Overcome With A Particular Phobia

Professor Umbridge has a major fear of beings that are not 100 percent human. Yes, this means she fears even the lovable half-giant Hagrid, and also any centaur or other "semi-human." Couldn't we just have gotten Hagrid to chase her out of Hogwarts?

Rowling Shows That She Has... Varied Hobbies

This is perfect, Rowling.

Rowling Found Inspiration In Her Own Life For The Professor

Rowling noted that Dolores Umbridge was inspired from, but not based on, her own teacher. She remembers very specifically that teacher also enjoyed twee accessories, particularly a little lemon-colored bow that would sit in her short, curly hair.

That visual sparked her thoughts on what is often hiding behind these "cutesy" inclinations:

I have noticed more than once in life that a taste for the ineffably twee can go hand-in-hand with a distinctly uncharitable outlook on the world. I once shared an office with a woman who had covered the wall space behind her desk with pictures of fluffy kitties; she was the most bigoted, spiteful champion of the death penalty with whom it has ever been my misfortune to share a kettle. A love of all things saccharine often seems present where there is a lack of real warmth or charity.

Rowling also includes so many more details on just how villain Umbridge is able to gain so much power at both Hogwarts and the Ministry despite being such a putrid human being. And the story has a lot to say about bigotry and hate not just in the world of wizards, but in our own present day. Which I think her movie adaptation star Emma Watson would really applaud.

More like this
10 Must-Read New Books Out This Week
By K.W. Colyard
10 Must-Read Books Out This Week
By K.W. Colyard
Nicola Coughlan Shared A Lady Whistledown Excerpt From ‘Bridgerton’ Season 3
By Grace Wehniainen, Alyssa Lapid and Sam Ramsden
Viserys’ Fate On 'House Of The Dragon' Could Differ From The Book In This Surprising Way
By Grace Wehniainen
Get Even More From Bustle — Sign Up For The Newsletter