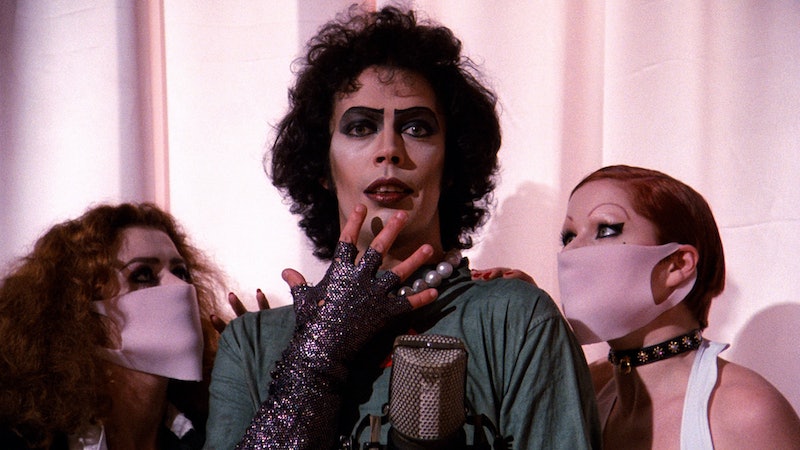 There’s nothing like Halloween on a Friday. The perfect mathematical formula for past-curfew trick-or-treating, particularly destructive punch parties, and — best of all — after-hours trips to the art house theater for an eerie, salacious, and spiritually igniting midnight movie.

Though midnight movies have never been exclusive to the Halloween season (The Rocky Horror Picture Show and Liquid Sky came out in August, Pink Flamingos and Eraserhead in March, El Topo and Harold and Maude in December), there is no American holiday that better empathizes with the character of the tradition. Just as the celebration of monsters and costumes has been reappropriated culturally (more accurately, subculturally) as a pledge to those deemed dark, labeled disturbed, look at as altogether different, so was this line of late night features. A phenomenon that, in its proverbial banishment, borne an exclusive community.

The themes shared by many of the films on the breed fueled both their relegation to the late showing slot and the dynamic fandom that would acquiesce thereto. In 1971, Harold and Maude released with a pithy, acid story of sexual and romantic revolution — a consistency throughout the movies to follow.

Although Harold and Maude is a timid picture by today’s standards, and might very well have been in the ‘70s were not for the brazen assignments to its languid, macabre tongue, it was by anybody’s count a striking film about being different. About a world in which “differentness” is as necessary as it is forbidden.

Such was always the maxim for the species, the midnighter: the cost of being one is high, but the alternative is simply not in the cards. The fissure between these two worlds — the world of day, of Harold’s parents, of Brad and Janet, of those harping at Divine for being “the filthiest person alive” as if it were a bad thing — and that of the pitchblack world past the strike of twelve, the uneasy loft balcony in Liquid Sky, the elegantly morbid mansion of Frank N. Furter, the every disturbing contradiction of physics and psychology in Eraserhead — would no longer be something to mourn. Eviction from the former world would be seen newly as emancipation, rejection finally known as bigotry.

Finding a celebration in these films of what was in their contemporaneous eras seen as sexual transgression, having this regularly scheduled safe house for the endorsement thereof, made midnight movies far more than just an agreeable pastime. Their heroes and villains were gay, transgender, or androgynous, and none of whom with any narrative cause to resign these functions to secret or subtext. Tim Curry’s maniacal party animal boasted a self-love you’d be hard pressed to find in most homosexual characters in mainstream pop culture today, let alone in 1975. The liberation of sexual inclination and the flexibility of gender identity were nigh pioneered in this stream of cinematic benchmarks.

A less pronounced triumph than its colleagues and predecessors, 1982’s Liquid Sky is nonetheless a special extraction — the practically prescient illustration of isolation among the isolated. The nightmare of being too weird for the weird, too alone for the loners. In the ‘80s club scene, a pantheon combusting with peculiarity, it was still possible — and, as is to be yet again understood — a true heroism to not belong.

Jumping back to Eraserhead, we find an image altogether different, and one bizarrely comforting in its unrelenting unsettlement: a world where no one belongs. A world wherein belonging is wholly impossible… and nothing you’d very much want to achieve anyhow. Augmenting the man-without-a-country sensibilities of its company’s heroes to full blown man-without-a-planet status, this David Lynch debut, as a stark variation on the midnight movie ideology, is as valuable to its upholstery as those films vocalizing it directly.

As the unofficial kingpin of the lot, Rocky Horror is often seen as the grand epitome of everything emblematic not only of the midnight movie circuit, but of American counterculture on the whole. Nothing in Rocky Horror introduces itself with explanation, let alone apology — not its jagged plot, its abstract characters, or its demonic aesthetic. It insists that it owes the world, the daytime world, no explanation, only exhibition. This is, too, a world. See it, Brad. Enter it, Janet. Recognize it as, quite plausibly, the sort you’ve wanted to inhabit all these years. Trust us, you’ll like it better here. We all do.