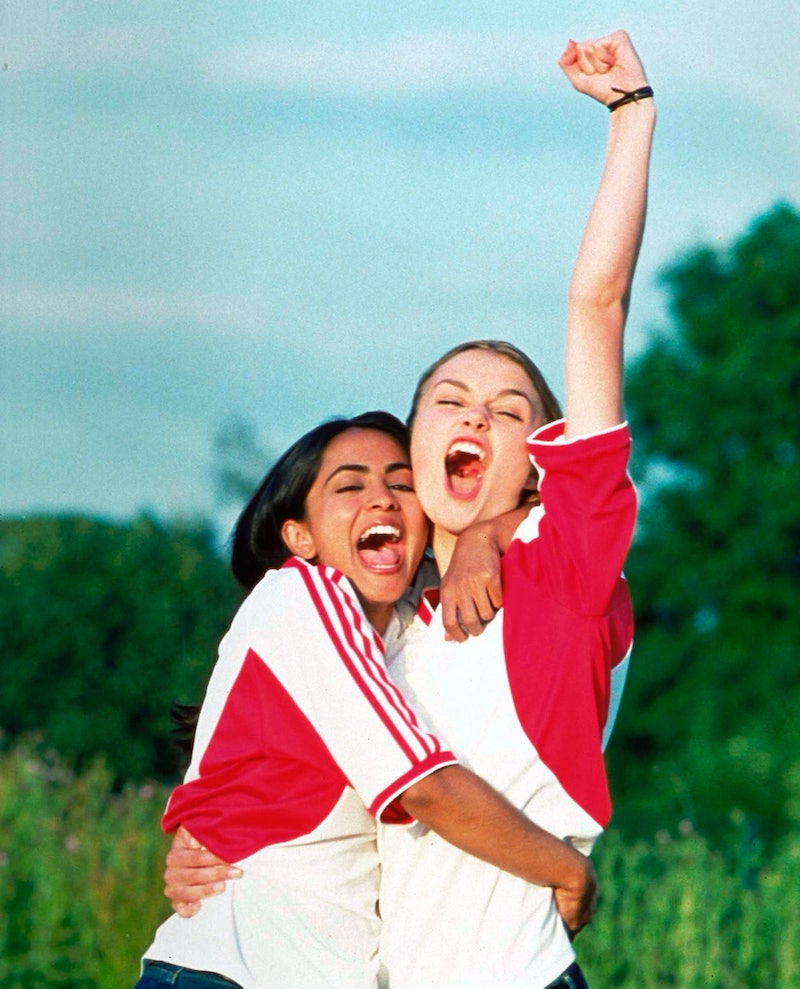 In more remake or reboot news, another nostalgic movie is getting a new twist. Bend It Like Beckham will become a musical in London's West End, and the movie's director, Gurinder Chadha, is also directing the musical. The 2002 film was the role that helped break out Keira Knightley, who was only 17 at the time. She starred as English soccer — oh, sorry, I mean football — player Jules, who befriends and recruits Punjab Sikh player Jess (played by Parminder Nagra) to her team. The comedy features a love triangle with the hot coach, Joe (Jonathan Rhys Meyers), clashing of cultures as Jess is supposed to be banned from soccer, and some overall cheesy moments, but that's what makes early '00s movies amazing. Plus, it was nominated for a Golden Globe and a BAFTA in 2003, so no one should just write it off as another teen film.

As a big fan of the movie, I think it will make a great musical. Not only does it give the world an opportunity to use Victoria Beckham's music in a musical, but it also has natural scenes and storylines that will work well with music. Keep reading to see why Bend It Like Beckham will be great as a musical, and in turn, why it definitely needs to come to Broadway next.

There are plenty of dance scenes in the movie.

There's a club scene with Joe, Jules, and Jess and a dance scene at Pinky's wedding, so those could make for some fun numbers. Singing could be added to either, especially when people are revealing their feelings.

Conversations can be made into songs easily.

When Jules first sees Jess play, that interaction could be made into a song about her coming to join the team. The same goes for any pre-game planning and big celebrations after winning a match.

Fights will be made even better with song.

When Jules screams, "you bitch!' at Jess, there could definitely be an element of singing added. Everything's better with a song.

It can incorporate traditional Indian culture.

This will come into play both with music and dancing (like at the wedding) and also with the Punjab Sikh culture blending that happens as Jess wants to play soccer, but her parents forbid her. Discussions and arguments with her parents can translate to a song, as can moments when they realize this is the right path for her.

The love triangle will make it even juicier.

As said before with the fighting element, having a love triangle allows for emotional moments to become songs instead of just longing glances. Whether it's a duet or a solo, I'm on board.

It's a great way to use Victoria Beckham's "I Wish."

The song was featured on the soundtrack, and the lyrics would work perfectly for Jules or Jess and their feelings for Joe. "I wish I could right now/Wish that I could show you how/I'm feeling you/Boy I try I can't hide/How badly I want you tonight/I've gotta fight it."